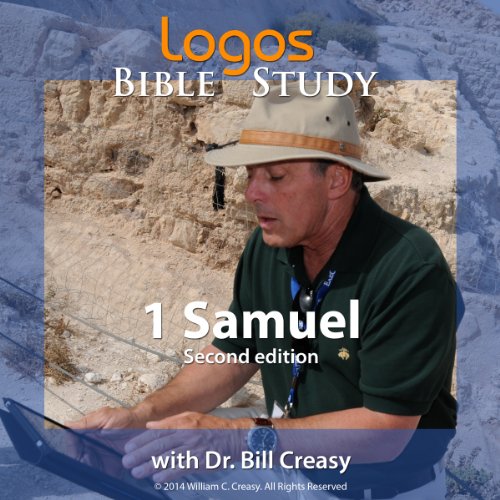 Dr. Bill Creasy of Logos Bible Study uses a literary, historical approach to examine and enliven the bible for modern listeners. Dr. Creasy draws on his studies, travels, and personal anecdotes to depict a vivid picture of the works of scripture. Somewhere between a sermon and a college lecture, he delivers these audiobooks with authority but a pleasantly friendly voice and a touch of fun, using contemporary references.

In this lesson Dr. Creasy walks us through the story of the Book of Samuel starting with the blessing of childless Hannah, who subsequently has a son, Samuel, through the kingships of Saul and David.

In 1 Samuel we continue our narrative. Samuel is the last of the judges, and with his end approaching, the people demand a king “so we can be like all the other nations.” As God tells Samuel, “it is not you they have rejected, they have rejected me as their king.” And indeed they have. The people choose a king, Saul, of the tribe of Benjamin. Saul will rule Israel for an entire generation, but although he looks like a king, he does not have the heart of a king, and the weight of kingship crushes him.

As Saul descends into madness, a young man named David begins his rise. Not only is the story of David the greatest story in the Hebrew Scriptures, it is among the greatest stories in all of world literature. Join Logos Bible Study as Dr. Bill Creasy tells this incredible story as only a world-class teacher can!

What listeners say about 1 Samuel

I really enjoyed tge light hearted approach to telling this story. It is also clear that Bill has a lot of depth on the subject. Recommend this one

I absolutely love Dr. Bill Creasy in the way he teaches the stories in this series. David is one of my favorite characters of the Bible and his story is so amazing. I know this is because of the way Bill tells the story. This is my second time listening to this, I shared it with my husband so he could listen, and also my daughter. You will not be disappointed!

Great Storytelling of the rise of King David

Dr. Creasy is a great storyteller! I really enjoyed his prospective on the warriors and battles given his military experience and comparisons of the Iliad. I enjoyed his portrayal of David and his rational for David's actions.

Dr Creasy brings the stories to life, developing the characters into personalities you can FEEL....making reading the Bible enjoyable is perhaps Dr Creasy’s greatest gift to Bible teaching. I have listened to many hours of his teaching (the One Year Bible, the entire New Testament & most of the Old Testsment) and have recommended his series to many believers and unbelievers alike....hope to one day join him in an Israel trip
Dr Chip Winkel

great book must listen to it

I totally enjoyed listening to this , so easy to understand and brings so much of the Bible to life regarding David .. many details I had never considered until now .... I highly recommend this study !!

Great study into the history of Israel's kings

entertaining and insightful look into the life of King David. Dr. Creasy is enjoyable to listen to and a wonderful storyteller.

Loved this story. The situations that David goes through are very interesting! A must listen.

This is another great lecture series from Dr. Bill Creasy. He is always incredibly insightful and engaging. He often supplements the material with personal stories which are relevant and interesting. He has taken several trips to Israel and the Middle East where he visits the locations depicted in the Bible and he shares those first hand accounts which enables him to take you back to that point in time that the scripture is talking about.

a comprehensive as it gets

Dr Creasy makes learning the bible exciting! I started from Genesis, and I am writing a review on 1 Samuel because it is only getting better and feel the need to share my ever growing interest in learning God's word.

God bless Creasy for his devotion to teaching.

A warrior recounts the tale of David

As usual, Dr. Creasy adds a good deal of useful knowledge and experience from his many years of Biblically-based travel and deep study of the texts and time period. His first-hand knowledge of tactics and warrior psychology opens up the story of David, Jonathan, Saul, King Aikish (sic?) and the warriors who followed them brilliantly, and his passion for the story he calls his "favorite in the whole Bible" is always apparent. Particularly rewarding (as well as funny) is his reading of the witch of Endor -- though I won't spoil it by further description here.

It's always worthwhile to have a map of Israel either in your head or in front of you, as he often refers to a visual we must imagine or find for ourselves. That such doesn't bother me is one indication of the enjoyment I've received from his recordings.