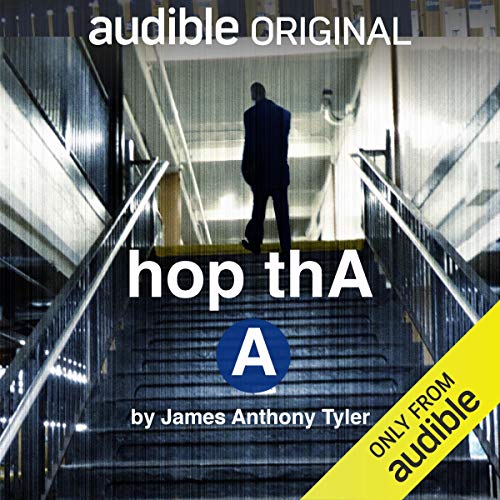 New York, 2013. During his late-night commute on the A train, Harlem native Tyrone tries to impress Niesha, his coworker at a nightclub, who just wants to read her book and pass the ride in silence. But as they travel uptown, the two forge an unlikely connection that extends beyond the confines of the subway car.

Directed by Stevie Walker Webb (Ain’t No Mo’, Public Theater; one in two, The New Group) and written by James Anthony Tyler (Artney Jackson, World Premiere at Williamstown Theatre Festival), hop thA A is an Emerging Playwrights Commission about finding love in an unexpected place and humanity in a society designed to leave people behind.

hop thA A was directed by Stevie Walker-Webb with sound design by Justin Ellington.

Portions of this audiobook contain mature language and themes. Listener discretion is advised.

Playwright James Anthony Tyler was awarded a commission through the Audible Emerging Playwrights Fund, an initiative dedicated to developing innovative original plays driven by language and voice. As an Audible commissioned playwright, he received funding and creative support to develop hop thA A.

What listeners say about hop thA A

The writing pulls you into the train with the actors, immerses you into the New York spirit and forces you to journey with the characters literally and emotionally. A must listen. A must feel. A must learn.

Really Painful as a Woman

This had a good story but the way it was written was really painful to listen to as a woman because it centered around unwanted attention from a male coworker. Even as their relationship advanced and they became friendly, he then asked her out and it was unfathomable to him why she would say no, we're just friends. And then after that, a depressing but slightly poignant ending. This painful set up I mentioned went on pretty solid until 40 minutes in. The story addressed some important cultural realities of black people living in NYC but I could not get over the conversational set up that dominated the piece.

As a woman, I’m so exhausted with these stories of men putting women in unfair and impossible positions.
He literally used his dead mother to get a woman to care about him. It’s unfair to the woman, and is juvenile at best.
He emotionally used this woman and she is left cleaning up the pieces. Why do so many stories include women that have to clean up men emotionally? We see this transfer of burdens, when he tells her of the mother. She is now burdened to respond in a socially acceptable manner.

Amazing Dialogue and Connection between the Actors

I was pleasantly surprised how artfully this play was performed. I felt like a fly on the wall listening to these amazing actors. Very recommended short Audible play.

This story took me by surprise. It was a beautifully written tale. Poignant, harsh and poetic at times...... it truly touched my heart.

I felt like I was the character and I used to ride the trains growing up in Brooklyn. It felt like a blanket comforting me as I listened to the story!

Very immersive performances, like I was sitting on the subway eavesdropping on their conversations. I was so caught up in getting to know them I almost forgot they were fictional characters. Very honest and real.

I enjoyed this from beginning to end! James Anthony Tyler did an amazing Job writing this and the performers did a great job bringing it to life. Would love to see it on the stage!

Such a good start

I enjoyed the story until the end. It was abrupt and felt like it went against the way the story was unfolding. Kind of disappointed.

I got too frustrated with the horrible communication patterns displayed here. Neither character was actually listening or responding with active listening at all. Terribly frustrating to listen to. Story was good, acting was great. I just couldn't tolerate the poor communication skills of the characters.