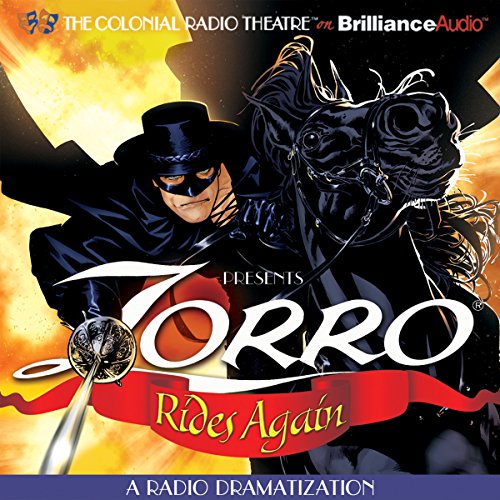 Has Zorro gone mad? That's the rumor spreading like wildfire through Reina de Los Angeles. For a dazzling swordsman wearing cape and mask is terrorizing innocent citizens. Riding with the night, he leaves the Mark of Zorro on his cruel deeds.

Already the governor has placed a price on Zorro's head, dispatching a cutthroat army led by the ruthless Captain Rocha to hunt him down. But Zorro's loyal band and a gallant Indian tribe refuse to believe the foul lie. Still, only one man can expose the truth - and unmask the evil impostor.

the only audiobook I've listened to twice, easy listening, humorous and easy to follow story line. If only all books were this good.

I'm a sucker for a well-told pulp / radio adventure, and Zorro rarely disappoints. If you know Zorro in any form or format, you already know what to expect here. Yes, it's over the top, especially in the department of Spanish accents, but the result is 1940s style melodrama. There's really not much to say except... I want more of these. A lot more.

This was well written, well acted, and highly enjoyable!

There are some pretty awful audio dramas out there, including a reimagining of the birth of Zorro produced by a different theater company and available in the Audible store, but this one is WONDERFUL!

My only complaint is that there are a few Spanish words, like the oft-used "señors" (instead of "señores") that are incorrect or mispronounced, but even for a language stickler like me, they didn't detract or distract from the rest of the production too terribly much.