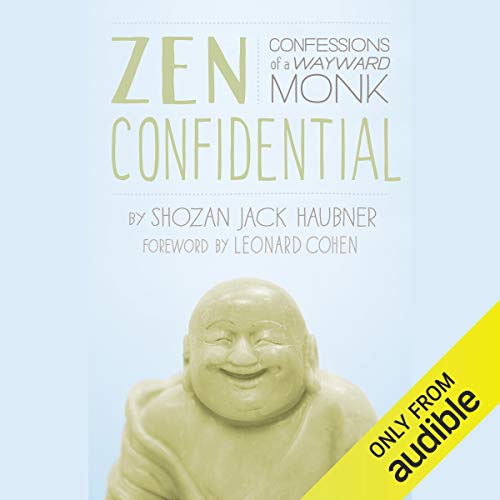 These hilarious essays on life inside and outside a Zen monastery make up the spiritual memoir of Shozan Jack Haubner, a Zen monk who didn’t really start out to be one. Raised in a conservative Catholic family, Shozan went on to study philosophy (becoming de-Catholicized in the process) and to pursue a career as a screenwriter and stand-up comic in the clubs of L.A. How he went from life in the fast lane to life on the stationary meditation cushion is the subject of this laugh-out-loud funny account of his experiences. Whether he’s dealing with the pranks of a juvenile delinquent assistant in the monastery kitchen or defending himself against claims that he appeared in a porno movie under the name “Daniel Reed” (he didn’t, really) or being surprised in the midst of it all by the compassion he experiences in the presence of his teacher, Haubner’s voice is one you'll be compelled to listen to. Not only because it’s highly entertaining, but because of its remarkable insight into the human condition.

What listeners say about Zen Confidential

I found this to be incredibly funny and insightful into the life of a monk. I especially found the gay friend antics and his doppelganger to be hysterical and steeped in suspense, Is it really him? does he have a double life? is he entertain a double personality disorder? and then the Gay friend notices the smallest detail to unravel it all haha.

I would recommend this book to anyone wanting to both feel relaxed, have a laugh and find inner peace, If this monk can find it I am sure anyone can with a little practice haha.

I am so grateful to the monk Jack Haubner for writing and reading this book, I will do my best to spread the word about your book. Out of al my audible listens so far, this is by far my favourite.

I'm afraid I found the author didn't come across as a very wise or likeable character. I found the crude tone more annoying than amusing.

Not what I was expecting - but absolutely loved!

I came across this book by mistake searching for Leonard Cohen books. I was expecting another mindfulness / spiritual enlightenment journey type autobiography but got SO much more

A must read whether your interested in zen / spirituality or not. It’s a humorous , spot on account of what it is to be a human in this crazy world we live in. Makes you think but not
Think too much :@)

recommended to me by my Zen teacher, this book really humanise zen for me. brilliant

Hilarious, heartfelt and gives a refreshing angle on zen.

It was really fun, you end up getting a great lesson in Zen but in the opposite way than you would expect.

It's very personal and shows how everyone's journey and search is so unique.

Maybe even better if you have tried Buddhist or zen practice as there are some Buddhist terms. This book really trashes the idea of being holy or trying to improve yourself through a spiritual practice.

Zen: Just Compare Everything to Excrement

I have listened to several books about Zen... mainly the one's written for a Westerner who has an interest in or cursory acquaintance with the practice. Shozan Jack Haubner's book seemed to fit that criteria, so I downloaded it. Also, this book's credit line lists Leonard Cohen as a contributor, which is also part of the reason I bought it.... Zen + Leonard Cohen, what more could I ask?

However, Leonard Cohen wasn't even mentioned in the book and that was a negative. I may have missed the Cohen intro or some other contribution, but as far as I could tell, he was nowhere to be found. I anticipated at least a reading by him and therefore was disappointed with this absence.

I forged on, though, because I do like a good memoir and "Zen Confidential" seemed to be a good beginner's book on Zen, written from the viewpoint of Shozan Jack Haubner, a former Catholic.

Shozan Haubner seemed to veer a little too far towards simplifying the lessons he wanted to convey to his readers. He found that most of life's complex problems should be usefully compared with excrement -- and the act of producing or not being able to produce it.

This got a little tedious. Yeah, I get it. Life is full of IT. I'm sure we all have felt that is the case some, if not most, days. It's probably why religions and philosophies evolved to begin with. In order to deal with ordure.

But after a couple of chapters, I began to think, "Shouldn't I be getting more from this ordained teacher's observation than life is full of the never ending production of feces?"

But maybe that's Zen. Being hit over the head with the obvious while hoping to learn more of life's meaning. And assuming there must be more. Or else why even write a memoir, let alone read or listen to it.

My only other observation is about his narration. My Southern ear really had a time getting used to his vowels and accent. Was it Northeast with a bit of Japanese? I dunno. He pronounced Las Vegas like "VAG-us"' rhyming with "BAG-us." That drove me nuts.

You may get more from this book than I. If there was some Zen "thing" I didn't get other than life is a Big B.M., then I'm guessing that just may be the nature of the beast.

Humanizes the idea you have of monastic purpose

Highly recommended. The author links the guts and grime of being human with the innate desire and search for the beauty of the spiritual.

If you're kool with gritty unsanitized humor that will show the spinach in your teeth? Willing to dip your thirsty pail deep into the question well? This book will delight you with a lyrical dance of thoughtfully choreographed words through a maze of typically ignored and shy things.

a beautiful and intimate look into zen and zen practice. Like Basho and his maple leaf poem the author hides little showing both front and back.

Who never zen monks were human ??? Or had more baggage than me??
Great insightful book into monastic life. The good, the not so good and the ugly!!! This is a very eye opening and honest book about the human experience, for all of us. Not just for a person searching to be enlightened.

The author seems to be obsessed with sex and shit. There were some good nuggets of info, but I feel like 90% of the book was a waste of my time.

Something unexpected, but good

Journey of a monk growing into the role...

Most unusual combination of son of gun barron to vegetarian monk...

Great book. The author writes well and is an excellent storyteller. Stories are Vi vid The narrative and Zen principles are interwoven seamlesslya.
They are Often funny with a great deal of insight.

Monkey Mind as narrator of hipster encounters with Rinzi Dharma as this in every moment. Basically a portrait of an artist as a middle-aged man in social media world space. Brings to mind the “I am your man” video that featured Lenard cooling out at Mount Baldy. Nice art.