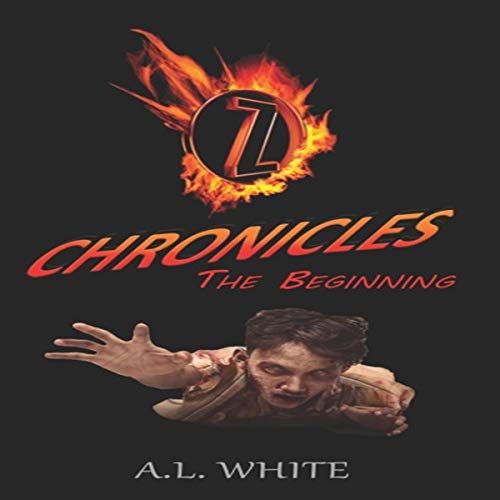 All of civilization is drawing its last breaths as the grip of the zombie apocalypse tightens on the world. In the last days of government efforts to stem the spreading plague, Lori’s parents are taken away when found to be infected - leaving her to look out for her two younger siblings, Jay and Virginia. Barely an adult in her own right, Lori must keep them alive, armed only with her wits and the little training her father’s "prepper" hobby instilled in her. They struggle not only to avoid the hoards of undead monsters roaming their former neighborhood and town, but also to stay sheltered, warm, and fed with resources scarce and sometimes deadly to retrieve. With the help of a fellow "prepper," Bob, and his two playful yet fearsome dogs, they will face the roaming corpses of mindless zombies and an even more dangerous threat moving amongst them.

What listeners say about Z Chronicles: The Beginning

I really enjoyed the story to this book although at first I was put off a bit by the narrator but I got used to his style the premise was great and it immersed me straight away the action is really good and I really enjoyed the characters chemistry and variety,I’m looking forward to listening to the next book

Excellent start for a new series. We gradually learn each characters story and the introduction of a new threat besides zombies is enticing. Looking forward to the next book.

This was a great story and sucked me in from the beginning, and was very disapointed when it finished! My heart was in my mouth for Lori and virginia when they ventured out, and fell in love with Bob instantly. I wasn't sure about the narrator to begin with but began to really enjoy his voice as I got into the book. I'm listening to book 2 "Surge of the Dead" now!

Really enjoyed this book. Just left me wanting for it to go on forever. Please write another!
I love a good zombie book, this one hit all the right levels. Not to much gore, not to much romance, and excellent interaction with the characters and situations.

Enjoyed this and looking forward to the next installment. wasn't sure about the narrator to start but he grew on me

This book is a great start to the series which has loads of potential. Loads of tense moments and loads of questions raised which makes me want to continue in the series.

Classic zombie tale, full of suspense. The narrator tells it with a wonderful barratone voice.

Short but a great concept

I was able to listen to this story in one sitting and I enjoy the concept and characters. The different types of infected and the challenges set for the characters came together really well. I will be reading/listening to the rest of the stories.

This book starts out with something eerie creeping around the edges of your mind. As the book progresses you begin to feel a sense of dread more and more. At its conclusion the fear and violence is in your face! The true zompoc/horror fan will be left screaming for more! But the timid and faint of heart will know that right here is where they need to stop. I can’t wait to read the next one!!!

This is the first book written by A.L. White I have read and I wasn't disappointed. The last civilization on Earth fighting for survival. They start to take extreme measures to ensure their survival as food is running out and create a race of super zombies that aren't quite zombies. I found this book to be intense and I could not put it down wondering what was going to happen next. If you like action pounding zombie books this is for you. I also like David loving as narrator his voice is smooth and clear.

OMG this was great

This was an amazing start to what I feel is going to be a very well done Zombie series!

Opening scene of this story starts with two individuals we assume are research scientists in a lab within a government military facility studying a zombie specimen. They hope to go out to get a fresh specimen. We switch over to two young adult sisters, who were trained by their father with prepping and survival skills and how use now and arrows, and their much younger brother. Young brother doesn't last long. The two sisters, Lori and Virginia, meet and join up with Bob, an older grandfather like guy, and his two dogs. There are the regular slow dumb zombies and the more aggressive faster somewhat smarter zombies dubbed zombies 2.0. Story doesn't end well for most of the survivors that the listener has been introduced to so far but Lori and Virginia are tough and this is only the beginning. This was a good introduction to this series.
"I received this free promotional review copy audiobook and have voluntarily left this review."

To Trust is to Survive, To Survive is to live.

1st of all i recieved this copy free during this covid-19 madness lol. 2nd of all it was great to be in a forum/group where the authors were nice enough to share with me there works to past the time and with that in mind Honest opinions/reviews of their hard work and creativity.

The Overall :
For what is a short intro to a the Z Chronicles Series..... I gave it a 4/5 Hm why? I found myself on occasion having to go back a couple times rewinding to a section where you're basically jumping from situation to situation whish is expectant but i kept getting lost. I dont really think thats a cause for concern. Probably that was my fault. You start off basically wtih a glimpse a fight to understand the zombie plague, Insecurity of what it could mean and maybe no hope to others. You're slowly given a glimpse to all other characthers who slowly but sure meet up surprisingly easily down the way. I think that was a bit of my problem how everything came together too easily. lack of much suspense maybe idk. I do love the idea of zombie infection or the cause of it creating 2 types of dangers..one mindless and one more acutely intelligent that its almost gives you goose bumps. o.O That alone had me wanting more to read and find out. Though not action packed with military hero's or an instant explosive firefight you are tossed into a sub-urban zone where a remnant family is tryna survive and just so happens this same walking hell gives them a visit which leads the main chars to their other companion and even a loss or two down the way. I love the 2 little brats of pets that almost make you question are these 2 people or trained muts XD I still question how they both play a huge roll more than the main chars at times.

Performance:
Again i'll give it a 4/5 Though the Narrator aint bad....and he does bring to life a bit of the varied characters o.o idk it's like he's trying a little too hard maybe not completely in the zone. :D Now i know im not English Nazi beign picky about pronounciating of "W" like the word "Whilst" it does get on your nerves haha. Rather distracting. Over all performance for Narrator yeah 4/5 I didn't find it as difficult to listen or understand though like i mentioned i did had to actually rewind and try to pick up on what i miss or if i misunderstood things before it transitioned.

Story:
I love the idea behind the zombies/infected within this novel. The unknowns involved and the knowns being found out which well endangers the characters portrayed who seem rather overly weak surprisingly o.O I like also the Characters at least expendable haha from the rate people are ending up dead. You get that vibe Zombie apoc " OP " In all honesty this whole intro is too short though. You get a feeling of wanting more but yet feeling like it just went too quick. Way too quick. That Cliff hanger though, I love it haha. It was forced or rushed at least..

NB* i didnt mention char Names because i feel like i'd spoiling your initial innocence to the book. Give it a shot and trust me you will like what you're listening to. I'm wanting more and ima do just that after i finish this review.

So for my overall end rating even though it aint a 10/10 i'll give it a solid 9/10 Those 2 k9/dogs to me are the mvp's of the novel/story XD. Much love the character growth.

Interesting Intro to the Series

I received this book in exchange for my honest review.
This is an interesting introduction to the series. Fighting for survival as with all zombie apocalypse books, the unique personality and skills of each character is explored. At times the descriptions of the resulting carnage is a little to graphic for my taste, but I was still able to enjoy the story and action. I appreciated the authors unique spin on a typical zombie filled situation. I look forward to reading the next book in the series.

THIS READER IS HORRIBLE! THE BOOK IS GOOD.

Narrator absolutely stinks. I liked the book though. I hope the next one has a new narrator.

This was an explosive entry to Surge of The Dead. The tie in was seamless. It's short, but I considered it a Novella or Book 0.5, so I was not disappointed. I thoroughly enjoyed the character development and the choice of main characters. Enjoy!

Initially it was a little slow but as the book continued I was drawn in and couldn't stop listening. The characters had to deal with an illness that changed their loved ones into something scary. Then they had to figure out how to survive. The story has you routing for characters, then saying no don't do that, to almost crying when something happens. Overall I loved it and recomend this for others to listen to.