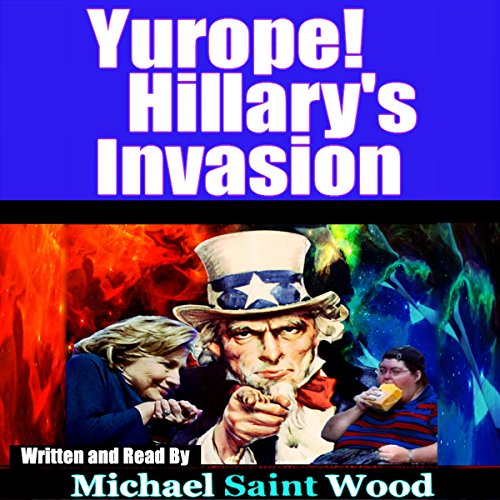 In Yurope! Hillary's Invasion, Thomas D. is the last self-sufficient man in America. The illiterate masses of humanoid gelatin surround him on their government assigned wheel chairs and clap rapturously as more and more of their freedoms are taken away in the pursuit of comfort. The first female American president, Hillary Clinton, is elected. At the same time, a mysterious stranger named Kuzen calls upon Thomas to liberate the country of Ungland. Supposedly, Thomas has a relation to Ungland's wicked king. Thomas's journey through New Something, England, France, Germany, and Poland to Ungland and the American invasion that follows him will change the course of human history. Whether that change is for the better, or for the worse, is up to Thomas to decide. Hillary's Invasion is a grand adventure through unknown lands where the degraded citizens of Yurope, once known as Europe, are lambasted with pitch black humor. The lazy, the ignorant, and the easily offended must not purchase this novel.

This is among the most insane, ridiculous, absurd, offensive, disgusting stories I've ever heard. It's also one of the most hilarious, and even manages to touch on the nature of freedom. Who else could do such a tale justice but its own author and his various voices?

Top-tier hysterical satire, funny and strangely prescient, the narration makes it better than the sum of its already chuckleworthy parts.

Emptyhero is a under looked artist who demands your gaze. look up his youtube channel

Yurope is the next wheel of time

Yurope is the next wheel of time, harry potter or twilight. This should be in all people's library.

this had me dying from the beginning. ordered the paperback, but got the audio after listening to a sample. if you like his stories, rants, and reviews on YouTube, I recommend getting the audiobook.