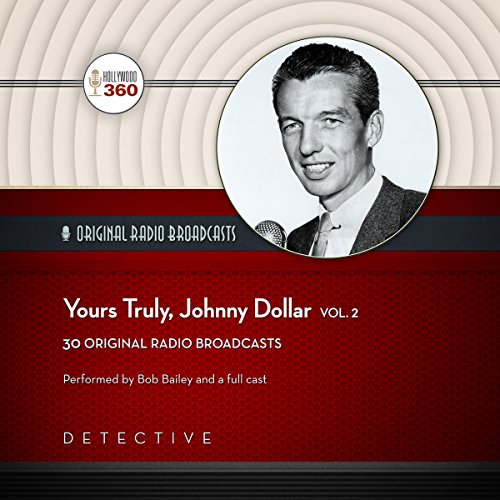 First heard on network radio in 1948, Yours Truly, Johnny Dollar chronicled the adventures of freelance insurance investigator Johnny Dollar, "the man with the action-packed expense account". For 14 years, it was one of the most popular detective shows on the air, lasting until the final days of network radio drama in 1962. Each story started with a phone call from an insurance executive calling on Johnny Dollar to investigate an unusual claim. His investigations usually required him to travel to distant locales and often involved murder. The stories were recounted in flashback, as Dollar listed each line item from his expense account: "Item one, $3.75 cab fare to the airport."

Over the years, many actors portrayed Johnny Dollar, including Charles Russell, John Lund, and Edmund O'Brien. But in 1955, Bob Bailey took over as the series was switching to a new dynamic format of 75-minute storylines told in five 15-minute installments, Monday through Friday. While other radio shows were waning in the mid-1950s, Yours Truly, Johnny Dollar was at its peak. Experts place these adventures in with the best of the best of radio's golden age.

What listeners say about Yours Truly, Johnny Dollar, Vol. 2

After a few minutes I find I believe the improbable of this "on tab" insurance fraud investigator. The sound is genuine 1940s. So what? It is fun!

The first few stories were duplicated from the first book we purchased. We enjoyed the book very much.

I always have like the stories performed by Bob Bailey, but many were repeats of other recordings I had already listened to.

What about Bob Bailey and full cast ’s performance did you like?

His voice is perfect for the role.

Did Yours Truly, Johnny Dollar, Vol. 2 inspire you to do anything?

Yes, try to figure out which recordings I already have. Not easy not decipher the way they are listed.