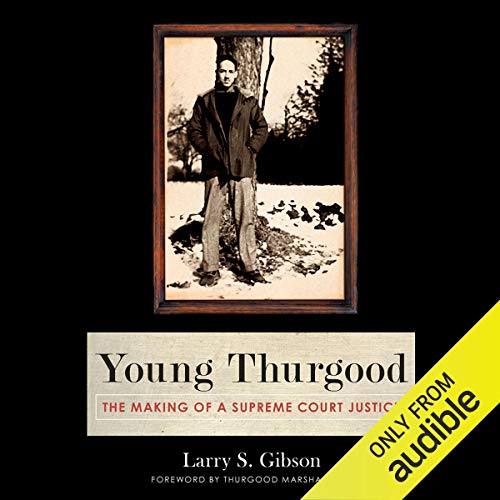 Thurgood Marshall was the most important American lawyer of the 20th century. He transformed the nation's legal landscape by challenging the racial segregation that had relegated millions to second-class citizenship. He won 29 of 33 cases before the United States Supreme Court, was a federal appeals court judge, served as the US solicitor general, and, for 24 years, sat on the Supreme Court.

Marshall is best known for achievements after he relocated to New York in 1936 to work for the NAACP. But Marshall's personality, attitudes, priorities, and work habits had crystallized during earlier years in Maryland. Young Thurgood: The Making of a Supreme Court Justice is the first close examination of the formative period in Marshall's life.

As author Larry S. Gibson shows, Thurgood Marshall was a fascinating man of contrasts. He fought for racial justice without becoming a racist. Simultaneously idealistic and pragmatic, Marshall was a passionate advocate, yet he maintained friendly relationships with his opponents. Young Thurgood reveals how Marshall's distinctive traits were molded by events, people, and circumstances early in his life.

Professor Gibson presents fresh information about Marshall's family, youth, and education. Gibson describes Marshall's key mentors, the special impact of his high school and college competitive debating, his struggles to establish a law practice during the Great Depression, and his first civil rights cases. The author sheds new light on the NAACP and its first lawsuits in the campaign that led to the 1954 Brown v. Board of Education school desegregation decision. He also corrects some of the often-repeated stories about Marshall that are inaccurate.

The only biography of Thurgood Marshall to be endorsed by Marshall's immediate family, Young Thurgood is an exhaustively researched and engagingly written work that everyone interested in law, civil rights, American history, and biography will want to listen to.

What listeners say about Young Thurgood

University of Maryland law professor Larry S. Gibson highlights the formative years of the African-American civil rights attorney and Supreme Court Justice, Thurgood Marshall (1908-1993). Professor Gibson was the first African-American law professor at the University of Virginia in 1972. Most of the biographers of Marshall covered Marshall’s professional life. Gibson, by contrast, focused solely on the first thirty years of Thurgood life.

Gibson traces Marshall’s family background and academic path, and goes into detail of his early professional life. Marshall faced segregated schools, bars on admittance to professional schools, low pay for blacks and justice system that provided little justice for blacks. Marshall came from a family of high achievers and of unusual names. His uncle Fearless Williams was personal assistant to the president of the B&O Railroad. His grandfathers Isaiah Olive Branch Williams and Thorney Good Marshall were successful Baltimore grocers. His Mother’s father was born free in rural Maryland joined the Union Navy and served on Union vessels during the Civil War. His paternal grandfather had been a slave, a Union volunteer and a Buffalo soldier. Thorney changed his name to Thoroughgood when he joined the Union Army. Marshall named after his grandfather changed his name from Thoroughgood to Thurgood.

Gibson wrote a well documented book. He used interviews, documents and personal papers rarely shared by the family. Thurgood Marshall Jr. wrote the opening of the book. Marshall was the attorney for the NAACP during the years of the Civil Rights battles. He was chief counsel for the plaintiff in the landmark 1954 Supreme Court case “Brown V Board of Education”, in which schools segregation was declared unconstitutional. He was the first African-American Supreme Court Justice appointed in 1967 by President Lyndon B. Johnson. Vince Bailey narrated the book.