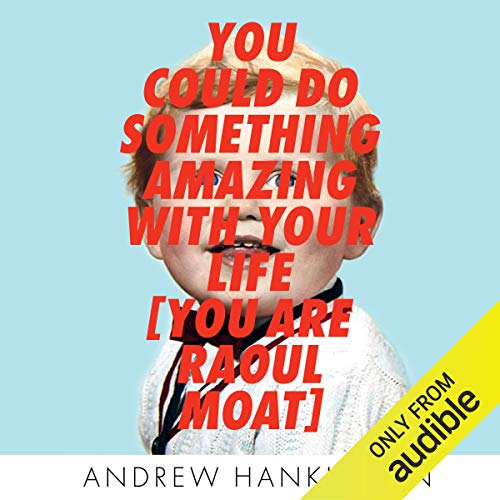 You Could Do Something Amazing with Your Life

By: Andrew Hankinson
Narrated by: Daniel Weyman
Try for £0.00

This is a work of narrative nonfiction based on the last days of the fugitive Raoul Moat, a Geordie bodybuilder and mechanic who became nationally notorious in Britain one hot summer's week when, after killing his ex-girlfriend's new lover, shooting her in the stomach, and blinding a policeman, he disappeared into the woods of Northumberland, evading discovery for seven days - even when TV tracker Ray Mears was employed by the police to find him.

Bizarrely, alcoholic ex-England footy star Paul 'Gazza' Gascoigne also played a role, trying to get a fishing rod and a chicken to Moat by taxi.

Eventually, cornered by the police, Moat shot himself. Andrew Hankinson, a journalist and a Geordie, tells Moat's story in the second person, which means that the listener is uncomfortably close at all times to Raoul Moat. It is an audio experience unrelieved by authorial distance or omniscient interpretation.

Everything comes from Moat's mind - from his recordings and writings - and the narrative Hankinson has woven is compelling, even if Moat's sentimentality, suspicion, and self-pity are never far from sight.

This is a narrative in the great tradition of Norman Mailer or Hunter S. Thompson - or, given its North of England flavour, Gordon Burn or David Peace.

Rivetting from start to finish. Did it all in the days.
You actually are..Raul Moat

There is a line written at the end of the summary saying 'This is a narrative in the great tradition of ... Hunter S. Thompson'. If like me you don't know who Hunter S Thompson is then you'll get a surprise.

This isn't a journalistic or balanced book, it is a second person fictionalised account of the last eight days of Raoul Moat's life, some of text seems to come from witnesses but because of the way it's written it's not clear what is invented and what is real.

It's an uncomfortable style perhaps more suited to a political satire column in a broadsheet or a radio 4 play, at three and half hours it's starting to push credibility with the same information repeated again and again, the summary gives a line to Paul Gasgoines involvement - but that probably fills less space in the book.

It's disappointing the style could have been adopted alongside or to support a proper journalistic effort, instead this sits uncomfortably between fiction and a defence (OK it's a non objectified account). The effect of second person is that you are removed from the story, you are neither invested or disinvestment, interested or disinterested.

The majority of this book is taken from Raoul Moat’s own tapes. I think it’s possible that Raoul Moat was delusional, he certainly misinterpreted many facts. However, the author ensures that factual inaccuracies are corrected. The result is a rounded portrait of the events surrounding Moat’s death.

This is a short listen and the story is incredibly sad. Moat was repeatedly failed by the system that should have came him and others safe.

Aside from the deaths and injuries inflicted by Raoul Moat there are two further great sadnesses; the first is that his crime spree could have been prevented and the second, poignantly, is that Raoul Moat really could have done something with his life. The man and his victims didn’t stand a chance.

This was a very unique take on a true crime novel - for me at least. I really enjoyed it, if that’s the right phrase to be using. I remember the events well, being broadcast live on tv as the manhunt happened. I remember thinking it was a tragic loss of life on all counts as well.

I had read reviews that said the book dragged in the middle. I don’t feel that was the case. I felt it became garbled and repetitive in the middle. Which given that this was an attempt to put the reader into Raoul Moat’s mindset, I think portrayed the frantic nature of his actions and the situation really well.

It’s a good book and although some parts seem strangely upbeat, ultimately it’s heavy going by the end of it all, but thoroughly recommended.

This is well written and superbly narrated. A gripping insight and one of the best audio books I have listened too.

Incredible read and the narrator was fantastic. Brings to life the rounded shadows of a troubled man.