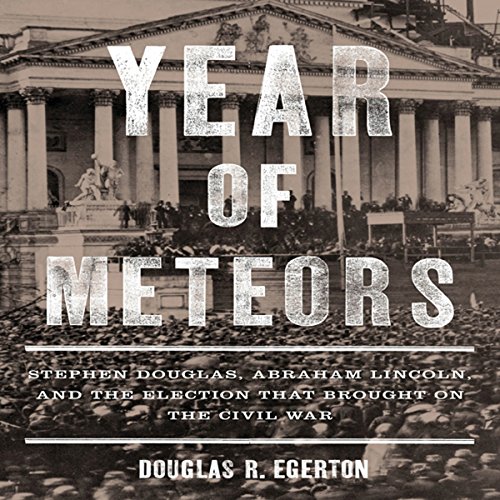 Stephen Douglas, Abraham Lincoln, and the Election that Brought on the Civil War
By: Douglas R. Egerton
Narrated by: Michael Scherer
Length: 13 hrs and 24 mins
Categories: History, American
4 out of 5 stars 4.0 (1 rating)

In early 1860, pundits across America confidently predicted the election of Illinois senator Stephen A. Douglas in the coming presidential race. Douglas, after all, led the only party that bridged North and South. But the Democrats would split over the issue of slavery, leading Southerners in the party to run their own presidential slate. This opened the door for the upstart Republicans, exclusively Northern, to steal the Oval Office. Dark horse Abraham Lincoln, not the first choice even of his own party, won the presidency with a record-low 39.8 percent of the popular vote.

Acclaimed scholar Douglas R. Egerton chronicles the contest with a historian's keen insight and a veteran political reporter's eye for detail. Vividly, Egerton re-creates the cascade of unforeseen events that confounded political bosses, set North and South on the road to disunion, and put not Stephen Douglas, but his greatest rival, in the White House.

We see Lincoln and his team outmaneuvering more prominent Republicans, like New York's grandiose William Seward, while Democratic conventions collapse in confusion. And we see the gifted, flawed Douglas marking his finest hour in defeat, as he strives, and fails, to save the Union.

Year of Meteors delivers a teeming cast of characters, minor and major, and a breakneck narrative of this most momentous year in American history.