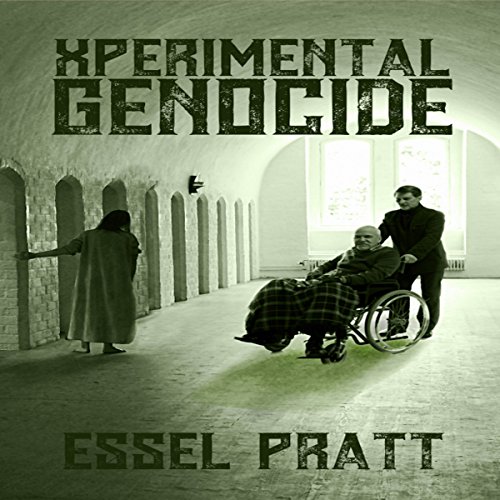 By: Essel Pratt
Narrated by: Carter Aitken
Try for £0.00

Each is an integral ingredient in the recipe of genocide. Each was present during World War II.

Imagine if Adolf Hitler were still alive today, hiding out in the one place no one would find him, dead center in the United States. Imagine he, and a small group of dedicated Nazis, discovered a way to resurrect one of the most iconic Jewish symbols of World War II, recreated through a sample of found DNA. Imagine if that person was to be used as a weapon to once again begin an onslaught against the Jews.

What listeners say about XPerimental Genocide

Mustaches in the Attic

Scott Essel Pratt is a twisted individual. In a good sort of way, though, since he shares his insanity so nicely. It is kind of like mental rabies. He has it, you read his stuff, and then you walk away with a festering case of bizarre brain syndrome. Kind of like dealing with H.P. Lovecraft's Old Ones, once you get involved with them you are never the same. Best of all, you pretty much end up joining the club. Check out his Sharantula just to see how crazy he gets, that is a fun, wild ride, that pays homage to those old B-movies.

I guess that what I'm trying to say is that Essel Pratt builds a bizarre universe, and this book is squarely in the middle of it. I will say that this is an extremely well written and wonderfully weird, but, if you know his mind you will quickly recognize who the players in this game are. It is a fun little exercise in genocide.

I'm really getting to appreciate his sensibilities, and his stories never fail to amuse. I dig the weird, and so his work just clicks with my own twisted mind. Aitken does a fine job conveying Pratt's words, he is disturbingly fun to listen to, and he really amps things up at the reveal. Even though I did receive a promo code for this review it in no way influenced my considerations of the material, and in fact, inspired me to be more honest. In fact, getting a code generally makes me harsher as a reviewer as I am more often concerned what someone like Me will decide based on my review.

This is a most unusual story, it taking me a while to understand what was happening. It is suspenseful and entertaining. Two hours was a perfect length to build the suspense and tell the story..
This is a voluntary review of a free audio.

Paranormal overload in a good way! This book is very unique. It is a wild ride!

Would you listen to XPerimental Genocide again? Why?

No. This is not the type of book to listen to multiple times.

What other book might you compare XPerimental Genocide to and why?

The narrator did a good job. His words were fully understandable.

This book was provided free of charge in exchange for a review. The plot flowed a little slowly at first but built nicely. It was apparent about halfway through that the antagonist was Hitler and the young girl was a clone of Anne Frank.

While listed as horror it was not detailed that there was a strong LBGT sub plot.

The main plot was a physiologist who is to develop hatred of Jews in the clone because she has the ability to use her mind to start fires and cause spontaneous combustion of objects.

It was an interesting twist of the story and was most enjoyable.