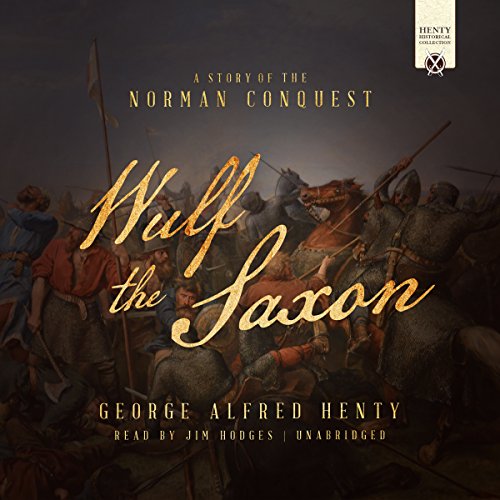 A Story of the Norman Conquest
By: George Alfred Henty
Narrated by: Jim Hodges
Length: 12 hrs and 37 mins
Categories: Fiction, Historical
3.5 out of 5 stars 3.7 (3 ratings)

When Harold Godwinson is crowned king of England in 1066, William of Normandy contests his right to be king because of an oath Harold had earlier sworn to support William's own acquisition of the throne. Henty's treatment of this critical time in history of the English people is even-handed, and his portrayal of Harold Godwinson - a king much neglected in our day - is a sympathetic one. Wulf of Steyning, a young Saxon thane in the service of Earl Harold, accompanies him on his fateful trip to Normandy and takes part in the Welsh wars, the Battle of Stamford Bridge, and the Battle of Hastings. Growing to manhood in such tumultuous times, Wulf's fidelity and honor earn him the respect of all he serves.

The Henty Historical Novel Collection, written by George Henty in the 1800s, covers many time periods in history throughout the world. In this collection you will learn history, geography, and vocabulary while also discovering hero characters for your children to emulate.

Jim Hodges delivers a nice rendition of "Wulf the Saxon" with apropos inflection and dramatization. It is good to see there are more! Awesome story for building character and instilling values in young men-in-training, or a right-rousing read for slightly older adventurers.

The performance of the narrator is bad. really bad re-record it please. this guy should read children's stories