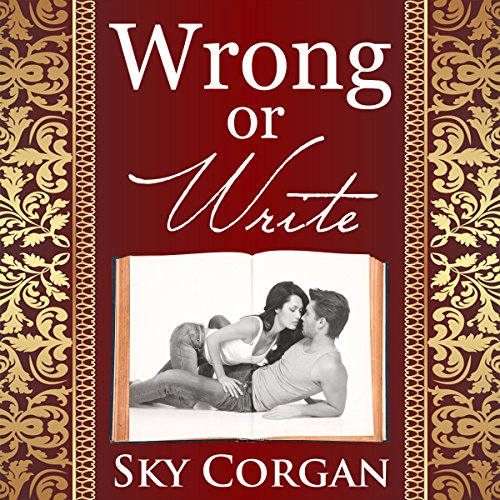 Kim Naramore has always been in love with her sister's best friend, Dominick Parker. The problem is that with a 12-year age difference between them, he never saw her that way. Growing up together, she always fantasized that he would be her husband someday, but as the years passed, she realized it was her sister he was after.

Fate often isn't kind, and Dominick moves away to escape his past and pursue his dreams. When circumstances of chance give Kim the opportunity to get closer to Dominick, she takes it. But years have passed since they've seen each other, and he's not the same man he was before.

Warning: This story contains adult content. For listeners 18+ only!

Sounds Like A child Trying to be an adult

I did not like the story probably because the narrator sounded so much like a little girl. It made me think of a pre-teen trying to live an adult life.

Would you recommend Wrong or Write to your friends? Why or why not?

Not really. The story did not flow so much as run like thick syrup.

Do you think Wrong or Write needs a follow-up book? Why or why not?

Perhaps but if it does get a more mature sounding narrator. A voice like a child should not tell an adult story.

Narrators ennunciation is really off for this book. I was so hoping not to have to listen to any descriptive sex scenes.

This is a quick and fun audiobook/novella. Kim has a childhood crush on her sisters best friend, Dominick. Dominick is in love with Kim's sister. He is a lot older than Kim and helps Kim's sister take care of the two of them after their parents die. Kim is love struck and holds onto that love for Dominick for years after he moves away broken hearted because of Kim's sister.

Years later Kim gets to have Dominick. This is a fun little novella that is a quick listen to or read. I found Kim really naive as she was still imagining Dominick in the same light from when she was twelve, now a college student and still a virgin she thinks Dominick wouldn't have changed over the years. The story gets heated and of course ends with a cliffhanger, ack, really? Well, since the rest of the series is out it is no big deal just carry on to book two. It could have been made into one book instead of three novellas, just my opinion as I am not big on cliffhangers when it comes to romance and erotica.

I really enjoyed Aundrea Mitchell's narration. Aundrea is easy to listen to and changes tones with the different characters. I found her narration very suiting for Kim's character. I didn't have any trouble focusing on the story or understanding the change in characters. Aundrea doesn't have a thick accent or anything that will draw away from the story. I look forward to listening to book two and more from Sky and Aundrea.

I love the short novellas to listen to in between my longer ones, and was really looking forward to this one. The premise was good...younger sister pines after older sister's best friend. Goes to live with him while attending college and loses her virginity. There are some definite moments in the book, but Kim is just a little too immature for me. I do wish we could have a little more of her life growing up, I think it would lend more to her character, of why she thinks as she does. Dominick just appears to be a gorgeous man who can't get over his first love. I think there is more going on in his head too...maybe if the book expanded a little more, it would have done more for me. The cliffhanger definitely had me listening to book #2 though.

Aundrea Mitchell does a wonderful job narrating this story. I do think her voice is exactly as Kim would have sounded..that slightly naive, bratty college girl. Her male voice for Dom is really good, love the inflection of boredom and passion, depending on the situation.