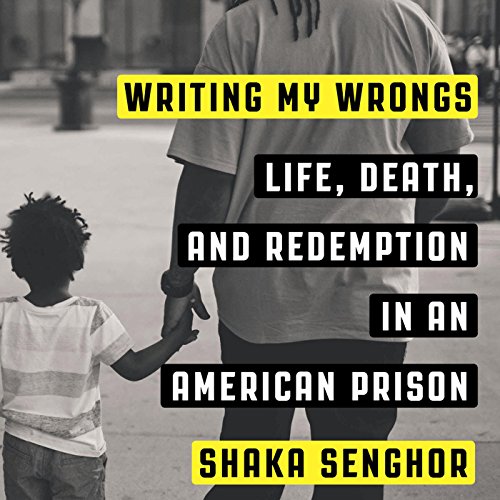 In 1991, Shaka Senghor was sent to prison for second-degree murder. Today he is a lecturer at universities, a leading voice on criminal justice reform, and an inspiration to thousands.

In life, it's not how you start that matters. It's how you finish.

Shaka Senghor was raised in a middle-class neighborhood on Detroit's east side during the height of the 1980s crack epidemic. An honor roll student and a natural leader, he dreamed of becoming a doctor - but at age 11, his parents' marriage began to unravel, and the beatings from his mother worsened, sending him on a downward spiral that saw him run away from home, turn to drug dealing to survive, and end up in prison for murder at the age of 19, fuming with anger and despair.

Writing My Wrongs is the story of what came next. During his 19-year incarceration, seven of which were spent in solitary confinement, Senghor discovered literature, meditation, self-examination, and the kindness of others - tools he used to confront the demons of his past, forgive the people who hurt him, and begin atoning for the wrongs he had committed. Upon his release at age 38, Senghor became an activist and a mentor to young men and women facing circumstances like his. His work in the community and the courage to share his story led him to fellowships at the MIT Media Lab and the Kellogg Foundation and invitations to speak at events like TED and the Aspen Ideas Festival.

In equal turns, Writing My Wrongs is a portrait of life in the shadow of poverty, violence, and fear; an unforgettable story of redemption, reminding us that our worst deeds don't define us; and a compelling witness to our country's need for rethinking its approach to crime, prison, and the men and women sent there.

What listeners say about Writing My Wrongs

Just goes to show that when you have enough fight in you to want to better yourself...it's possible to do so and it's never too late!

Great bool for sure 👍🏾

Parent son daughter friend has some profound lessons for all. Must read if you wish to add to your intellectual spiritual and emotional growth.

Loved the honest, even when it was hard to listen, hope he changed some lives

Unable to stop reading once I began. So insightful to ways of human suffering and how the spirit overcomes.

Very inspirational, up there with the greats.

This a must read/listen to book. From the beginning I was hooked. Shaka's writing is amazing, honest, emotional and gripping. It's apparent that at a very young age 'J' was a young male who was very self aware and recognised his struggles with his mother, his parent's separation, the situation he found himself in living on the streets and crime and fundamentally himself.

Shaka maintained his mental strength and focused on the positives in his life and what he hoped he had to look forward to.

Written with honesty with a feeling of true regret. Really pushes the issue on rehabilitation and the prison system in general. Could I forgive and support 2nd chances if my child was murdered? I can only hope I never find out.

Loved it all. The story, the quote, the message. AMAZING.
INSPIRING.
EXTRAORDINARY.
UPLIFTING.
ABSOLUTELY BRILLIANT.

I congratulate Shaka on his courage and life transformation . I learned of him when he appeared on the Oprah Winfrey Network. His story moved me. I, too am a convicted felon. I am a white 46 yr. old woman , with unloving childhood, who made poor choices in my life. My crime was less severe as his, but I too have felt the struggle of overcoming labels and judgment since my conviction in 2009. I did not serve time, but my life was forever changed. I had a hopeful future. Lots of potential and gifts, but never believed in myself. I bought your book on audio. I work in a machine shop. I struggled to get this job because of rumors and judgement in a very small town. I've been here for 3.5 years. Have proven myself worthy, at least as a hard worker, still not as a good woman or decent human being. I understand slamming doors in your face, but I will continue to forward. He is an inspiration to people like me out here. MyShawna Herr

Shaka's straight forward descriptions of life inside prison exposes the truth behind bars and sheds light on what we can do to save ourselves from our broken criminal justice system. He pulls the curtain back and takes us into the belly of the beast that is eating away at American culture.

Shaka's resilience, wisdom and strength shines through in a system dedicated to humiliation and punishment over redemption and restoration. His journey teaches us about hope and the promise of a better future.

It was inspirational, and very moving. Great job, can't wait to share with my inmate students. Is definitely a top 10.

This is a raw uncut story. Tells the inner conflict, struggle, and pains of a man who could have been considered and outcast or undesirable. It is painful yet inspiring.

What did you love best about Writing My Wrongs?

One of the things I loved the most about Writing My Wrongs was the author's transparency with his experiences and the lessons he has learned.

What does Shaka Senghor bring to the story that you wouldn’t experience if you just read the book?

Shaka Senghor take this emotional read to the next level. No one could have told his story better than him!!

This book will evoke Change in your Life!!!

the story was exactly what i was looking for, however, the author's narration took from rather than added to the experience.

Right about Chapter 22 I could tell this was a changed man. I felt that after the solitary confinement and reentranace to general pop that you didn't let it shake you and you wanted to move forward. You were still organizing and counseling. It made me see how so many (Black) men have the potential but youthful decisions often stump their progression. It also made me see as a parent stability is important. And to have more compassion for those who unfortunately take a wrong turn or get dealt a bad hand. Sometimes I work with adolescents and in an urban environment it is heart wrenching and frustrating to see their behavior but I wanted to read this story to gain more compassion and take a different approach to my responses and reactions.

Finished this book which I could not put down

As I read this book after watching him on CBS this morning I know know that people can make a change if they work hard at it without giving up.
It may be the hardest thing to do but God sets a path for all of us and some of us do not understand. As if we reach out to one another and just try to understand what they are going threw they just might be able to
Make a change for themselves to get better. This book will never be forgotten.

Good but author should not have narrated

I ran across this book by accident. I read the reviews and thought the listen would be well-worth it. It was an eye-opening subject and well-worth the time but I kept getting derailed by the author's narration. It wasn't horrible it was just too distracting. I've heard worse by other authors though so this is not a slam. I just think this book would have been better served if read by someone else.