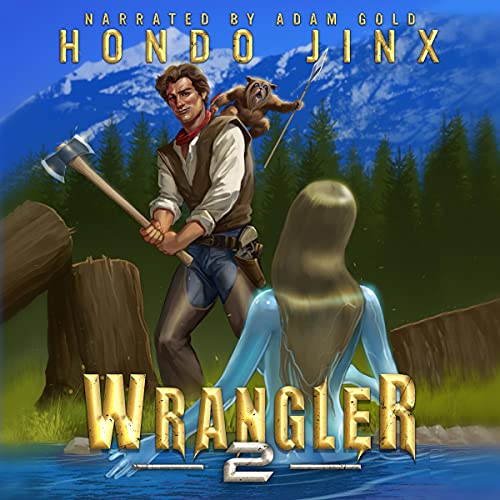 Braddock is now the Meadow Master.

His people are building a town in the wilderness, his women are pregnant, and he has a powerful ally in the smuggler merchant, Red Eyes.

Things are going well. But life on Tardoon is never easy.

Now, Braddock must rescue Cascadia from the river hag, explore the dangerous city of Black Harbor, petition a powerful sorceress, and free a mysterious woman imprisoned in gemstone.

Can an Earthman running low on ammo wrangle a world of monsters and magic?

Warning: This series contains adult themes, graphic violence, and a strong male protagonist with the rough and ready attitude of an American frontiersman. Listen at your own risk.

What listeners say about Wrangler, Book 2

Well, I guess the wait begins for book three.

This is still a similar book to others in this genre however, if you read my last review I compared it to “wild Wastes” by Randi Darren. With book two this series has indeed moved away from having major comparisons to only having a few.

I didn't give this book a solid 5 in all categories due to Mr. Braddock seeming to get denser with the progression. Now I can understand having the protagonist be a bit thick, but I never thought Mr. Braddock to get this bad. Do not get me wrong; I am okay with his character development; I don't want him to get to the point where he is the trope anime protagonist in a harem-themed anime. He is only this way if he hasn't already slept with the female character.

The second reason is that I don't feel as though there was enough “action” in this one. There are a few parts, but I understand the world-building and possible setup for the future books.

Like I'm my previous review give all the stars you can to this title and help push out the next chapter and maybe just maybe Mr. Braddock will tip his hat your way!

Excellent melding of story and narrator

I was waiting for the continuation of Jed's Story. Hondo Jinx has delivered a solid tale to back up the first offering. His world is being fleshed as well as exploring new and old charecters.

As before Mr Gold's voice is perfection for this great story of a cowboy straight out of the old west. All his characterizations are spot on. As the narrator and voice of our hero though, you can imagine yourself sitting next to the campfire smelling the pot of coffee and/or maybe tonight's stew in the pot. All the while your horses nibble at the grass, and a coyote yips in the night.

this is a fun series where cowboys and fantasy creatures collide. if you are a fan of Hondo Jinx or harem storylines I highly recommend you check this one out. narrator had a surprising range he has the dusky barratone Sam Elliot, but the feminine characters are believable A+.

BRADDOCK IS THE TRUTH!

Hondo Jinx and Adam Gold team up again to show how Sam Elliott would tell an amazing story! Just kidding, but Adam does sound like him as Braddock. That’s a tough guy narration.

This is one of my favorite books ever... hands down. I enjoyed the characters and story immensely. I will definitely be buying all of the series as they come out!

Alright, if you're reading this then i assume you listened to the first one. If you've listened to the first then this is simple, yes he delivers on this sequel as he does for all his books.
I will on the other hand will dock a point from a perfect score for playing the "mc just doesn't understand what's going on" troupe. You can't have it both ways with amc that can read everyone's intentions and body language, and have been with more then a few girls; then say oh he's completely naive when someone likes him. Gotta pick one buddy.

The voice actor makes me wanna chop wood and eat chili out on the range lol Good story and good fun.

Better in some ways, worse in others

The biggest positive I can say about this book is that t here's A LOT less 'Miss Elizabeth' this time around. Thank Christ. I couldn't stand her in the first book (and Braddock's infatuation with her because she prurdy).

Unfortunately, our protagonist seems to like being suicidally stupid on several occasions. The most frustrating thing about this however is that no one ever calls him out on it. 'I don't need no protection,' he says in his excellent southern accent (great job Mr Gold!), yet the second he's left alone he's naivly tricked into drinking poison, drugged and made to spill all his secrets about his Grove and putting all those he holds dear in danger...

And no one says anything about it. Not even a 'you don't need protection, huh?'

It made for an incredibly frustrating listening experience. Because this is only one of SEVERAL instances where you want to beat your head against the wall in frustration, and yet there's no sign of growth, reticence or self realisation.

For me I need some of these brain-dead, 2D women who claim to love him so to start smashing him in the face each time he does something stupid going forward. If they can stop trying to climb on his dick every five seconds.

As I said. Frustrating.