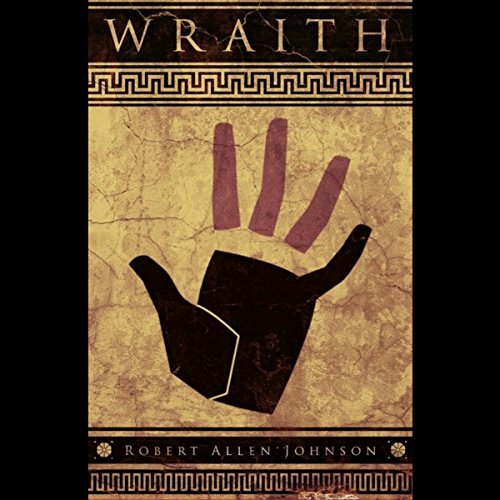 By: Robert Allen Johnson
Narrated by: James Foster
Try for £0.00

In Wraith, author Robert Allen Johnson leaves the alleys, battlefields, and politics of ancient Rome behind in favor of fantastical war-torn lands from ages long past.

In Tiro's tale, a troubled bowman known as "The Ghost" fights to navigate a world of loneliness, revenge, and purpose after losing all he holds dear. In the tale of Arach, a weary traveler in a strange, foreign land meets a mysterious, unwelcome visitor with unknown intentions.

Thus begins the first chapter of Johnson's new series Empire and the Hand, a dark, emotional ride through failure, purpose, vengeance, and regret that will leave fantasy, mystery, and historical fiction fans breathless and eager for more.

What listeners say about Wraith

An interesting start to a new series.

Definitely towards the top. If you want a fantasy book that is a little dark and different then this is for you.

It felt a little different to the norm. Possibly because we have two main characters who in their own way live lives of suffering, with a backdrop of fantasy and the supernatural. I loved the bowman sniper idea. As someone who is a keen archer it's nice to get characters who like to shoot.

James Foster is an excellent narrator and the overall production is of very high quality. He kept the story at a steady pace and his relaxed yet engaging voice gives authenticity to the dark and foreboding atmosphere permeating throughout the story. He adds just enough distinction between characters to know who was talking without using distractingly different voices. Let's hope he's in it for the entire series as its a great combination of narrator and story.

The quick answer is that I did.

The audiobook has a very good plot. The characters were real, the situations very understandable, the emotions deep, and keep me interested. The writing was descriptive and filled with detail that gave me a complete sense of time, place and feeling. I recommend it.

Wraith compels you to listen!

I drive a truck for many hours each day and listen to many audiobooks. I found Wraith to be highly engaging, thought provoking, and downright captivating. The characters live tough lives and the author does a great job making me believe in the story.

My favorite character was the wraith. What is it? Why is it? is there any good in it? I also loved the way the narrator changed his voice when speaking the Wraith's part. Awesome stuff.

Which character – as performed by James Foster – was your favorite?

The wraith was the most unique character. James Foster nailed it.

I devoured this audio in two sessions. It went by fast. Very professionally narrated.

I guess if I were forced to come up with a complaint I would say the book is a bit short. At only 5 hours it went by fast, but I am no doubt going to be hooked on future volumes.

Would you listen to Wraith again? Why?

Yes. I'm sure I will listen to this again before the next book comes out. There seems to be so much beneath the surface to this book, a second read/listen would be worth it.

The story of Arach was so spooky and sad throughout. I'm not sure which of the two stories was better, but this one won on the memorable and creepy scale.

So many! One that sticks out is when Tiro returns home.

Yes! It's a book that moves fast and rarely, if ever, slows down. It was easy to get lost in the story and lose track of time.

I cannot wait for the next book!

Yes! I already have. The story is so engaging. I can't wait for the next book!

There are so many heartbreaking, sad, and spooky moments throughout the book, from one chapter to the next. I should keep them to myself to avoid any plot spoilers though.

Which character – as performed by James Foster – was your favorite?

Both of the main characters, Tiro and Arach, were memorable. Both have very different stories, but both kept me engaged and wondering what happens next to them.

It definitely made me nervous at times and a little creeped out.

Buy this book! I can't wait for the next one!

The Start of a Promising Series.

With memorable characters and questions left to be answered, this promises to be an epic fantasy series.

It's a great start to an interesting series

I really enjoyed this book, but I tend to listen to more horror titles.

It kept me wondering what was happening, or going to happen. I felt engaged the whole time.

He's awesome, I enjoy all of his works, and pretty much everything about them.

I received this title in exchange for an honest review

Couldn't Put It Down

What made the experience of listening to Wraith the most enjoyable?

There were no dull moments in this book. It seemed like I couldn't put the book on pause at the end of a chapter because I wanted to know what happened next.

It seemed like I was there. The author's storytelling, combined with the narrator's professional delivery were a perfect match.

Each chapter seemed to get more intense, terrifying, and heartbreaking as it went on. Just the kind of book that only gets better the deeper you get.

Wow, I have no idea.

Wonderful book, I would recommend it to everyone.

What made the experience of listening to Wraith the most enjoyable?

It moves fast and rarely slows down. Very easy to listen to in one or two sittings.

The stories of the two characters were deep, dark, sad, and intriguing. It was easy to get lost in the story itself.

What does James Foster bring to the story that you wouldn’t experience if you just read the book?

I loved his pacing and characterizations. The wraith was great.

It did make me nervous at times, and as I said above, sad. There's definitely a lot of emotion and tension in the book.

It was a great book that kept my attention. Helped pass the time while driving.

Set in an ancient world where might often makes right, Tiro and his sister must navigate around deadly pitfalls. Young Tiro is an excellent shot with the bow and he hates the Empire and all who serve it. Meanwhile, we have this traveler, Arach, who is an older man. He is plagued by a supernatural entity, the wraith, which gives him and his horse no end of grief.

This was a very captivating book. It had that historical fiction quality about it that often made me feel like I was reading a story set in ancient Asia someplace. Then the author pulls in some fantastical elements here and there which make the story a little spooky and that much more interesting. The first openings scenes had me hooked. I definitely wanted to know more about what was going on and why Tiro was taking people out with his bow and why he has so much anger. The author was able to keep my interest at that level for much of the book.

Tiro and his sister are close and they both care about their mother; their step-father is another story. This rebel group, the Hand, has their eye on Tiro. The Hand is well organized with a chain of command and supply routes and contingency plans. However, they do demand obedience and Tiro does have a little problem with doing as he’s told. Tiro’s sister has a few good lines but after the first few chapters, she fades into the background until a certain important event happens later. So, if there is one thing that could strengthen this book, it would be to have more female characters and give them relevant roles.

Arach is the other main character and he is a bit more mysterious. He’s not as full of anger as Tiro is. In fact, he talks to his horse and seems quite fond of him. Then there’s this wraith that plagues him. At first, it’s a suspicious pest, but as the story progresses, it becomes a true threat.

With this wraith being such a nuisance, I did wonder if maybe Tiro is putting his energies into fighting the wrong Big Bad Guy (the Empire). There’s definitely something more afoot in the land and the author has set us up perfectly for a sequel to figure out what that is. Over all, this was a good solid read that I enjoyed quite a bit. The main characters had more complexity than I expected and the world building was good. Definitely looking forward to the next in the series.

I received a copy of this audiobook at no cost from the author (via the GoodReads Audiobooks group) in exchange for an honest review.

The Narration: James Foster did a very good job with these characters. Tiro sounds like a young man and Arach sounds like an old crotchety man. His female voices are believable. He did a good job getting strong emotions across without overdoing them.