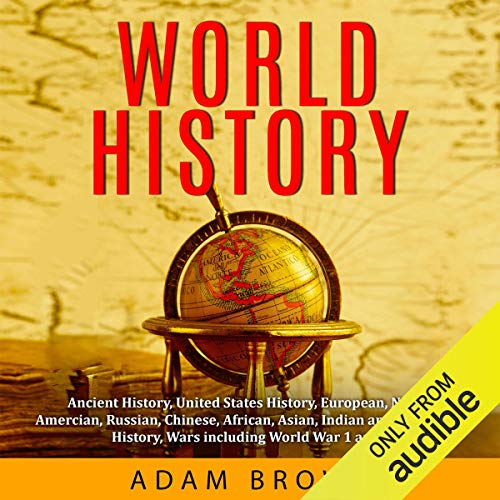 Have you ever wondered how the world got to where it is today? Get ready to discover the rich history of our planet. You will be astonished to learn about some of the events that have occurred!

Here is a sneak peek of what you will Learn:

Take action and get this audiobook now!

What listeners say about World History

This book won't make you an expert in specific events in history, but it will definitely give you a good overview, which is exactly what I was looking for.

This book follows the history of the world through a modern lens - and tells the stories of across the world, not just western civilization.

When I was kid, I really wanted to know what happened during and after the wars including World War 1 and 2. Well, this book has discussed the things I should know. Easy to comprehend.

My mom bought me a lot of history books but I guess this one is the best. This audio book is so exciting to listen to so I never feel bored. Hope to listen more books from this author.

My daughter like this book because she found interesting facts that she can share with her classmates on her report. She is very happy with this purchase. Kodus to the author.

This is an interesting and engaging book of history to have. If you buy it I hope that you enjoy it as much as I did and thank you for taking the time to read my review.

Ideal gift for my sister

I think this book will be an ideal gift for my sister who likes history very much. She will be very interested in the content of this history book. Indeed a nice gift for teenagers and adults who have already formed a casual interest in history. It’s a fabulous audible book.

I feel that the book is worth far more than the price I paid for it. I'm now listening to it, and I cannot begin to say how much I appreciate this fine writing and narration. I'm learning a great deal.

This history book is one of the coolest book I have ever listened to. It's very enjoyable and not painful to the ears. I will listen to this book again.

I should say that this book would be of particular interest for families who wish to give growing children a broader perspective and idea of the world and the events they should know. I also found it helpful for myself: I read a lot of history books both broad sweeps covering nations or regions, as well as more focused studies. This book is a handy guide for getting a sense for topics and regions which I don't know much about, and decide where I might want to focus in my further listening. Great reference for me.

The best thing of all about this book is that it is a true synthesis, placing the events of the past two and a half centuries against a backdrop of control and chaos, isolation and often forced opening up. Highly recommended as a foundation text for World history since the earliest times.

You can learn a lot of history points from this book.I think it is a shame that Americans in general seem to know so little about their own history, probably because they were bored to death in their history classes, with terrible textbooks. It is extremely important these days for us to know as much about this subject as possible, and Adam Brown telling of it is gripping.

That is, I am skeptical about most conspiracy theories but I am prepared to believe them if the evidence is presented in a reasonably convincing way. This book is Captivating and Thought-Provoking! I Highly recommend it to "Truth Seekers" everywhere. Loved it!

I am not into history but this book is such a fascinating source of history. I am happy that I got this. I would love to listen this audible book all over again.

This is how American history was meant to be shared and it's an important book for the age we find ourselves in, Especially as we become frustrated with the present and begin to think it can't get any worse. Enjoy!

This is an entertaining listening that is both educational and empowering. There are not many well-written, non-boring English sources of World history but I'd definitely say that this is one of them.

I love how this book was written. It's very clear and well-illustrated that really drives into World history. Fascinating facts and events that everyone should know. Better get this book.

This is exactly what I needed. I needed something that would give me a basis for history study. I read a chapter to my daughter a day and we dig deeper off that through google or youtube videos on each chapter. It's fantastic!

I absolutely adore how the content was presented by the author. It's very comprehensive and full of good information of the past happenings. I should recommend this to my co- History teachers.

Such a wonderful listen indeed

I am so proud that I got this book because I really love to listen Ancient History. This book is nicely narrated and it gives me more urge to discover many things in the past. So lovely and highly appreciated work from the author!