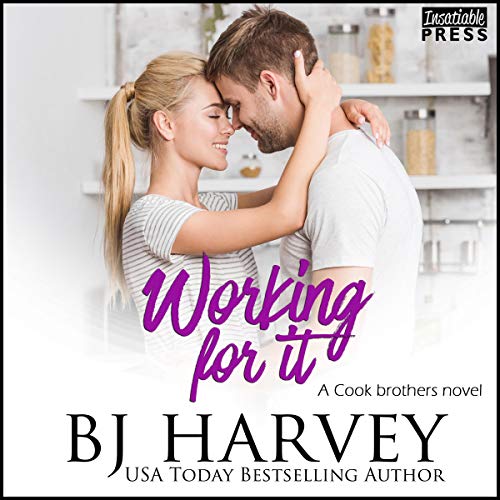 By: BJ Harvey
Narrated by: Kelsey Navarro,Tim Paige
Try for £0.00

Sometimes a surprise baby can lead to unexpected happy endings.

Twice-divorced Ezra has always acted first, thought it through later. Except in Gilly he finds an equal; a strong-willed, independent woman who doesn’t need his money or kind heart to get ahead. She just wants him.

Career-focused Gilly never imagined she’d be 35, single, and pregnant. Except when Ezra suggests they date rather than just mate, she finds herself wondering whether the man she’s been looking for has been in her bed all along.

If they can survive raging hormones, house renovations, and the realities of childbirth, surely creating a family will be a walk in the park...right?

Working for It is a full-length house-flipping romantic comedy that can be listened to as a complete stand-alone and is the fifth and final book in the Cook Brothers series. This is the story of the brother from another mother, Ezra Baker, and the one he never saw coming.

What listeners say about Working for It

sharp wit, gr8 one liners! Easy listen. romance is what most women hope for in a man, almost unreal, but very nice ro fantasize about. Female speaker more fun than male, but both kept my attention. having not read the previous cook bros series,, family characters got a little confusing at times, but story line easy to follow.