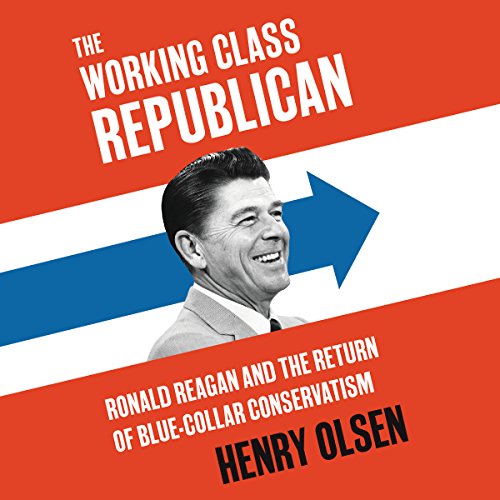 In this sure to be controversial book in the vein of The Forgotten Man, a political analyst argues that conservative icon Ronald Reagan was not an enemy of Franklin Delano Roosevelt and the New Deal but his true heir and the popular program's ultimate savior.

Conventional political wisdom views the two most consequential presidents of the 20th century - FDR and Ronald Reagan - as ideological opposites. FDR is hailed as the champion of big-government progressivism manifested in the New Deal. Reagan is seen as the crusader for conservatism dedicated to small government and free markets. But Henry Olsen argues that this assumption is wrong.

In Working Class Republican, Olsen contends that the historical record clearly shows that Franklin Roosevelt and the New Deal itself were more conservative than either Democrats or Republicans believe and that Ronald Reagan was more progressive than most contemporary Republicans understand. Olsen cuts through political mythology to set the record straight, revealing how Reagan - a longtime Democrat until FDR's successors lost his vision in the 1960s - saw himself as FDR's natural heir, carrying forward the basic promises of the New Deal: that every American deserves comfort, dignity, and respect provided they work to the best of their ability.

Olsen corrects faulty assumptions driving today's politics. Conservative Republican political victories over the last 30 years have not been a rejection of the New Deal's promises, he demonstrates, but rather a representation of the electorate's desire for their success - which Americans see as fulfilling the vision of the nation's founding. For the good of all citizens and the GOP, he implores Republicans to once again become a party of "FDR conservatives" - to rediscover and support the basic elements of FDR (and Reagan's) vision.

A must read for political scientists and thinkers

I commend the author both for the depth of his research and the attention to detail he has shown, the result of which is a book with a very important message for those interested in politics.
I was a young boy growing up in Great Britain during the Reagan Presidency, so I was far too young to absorb and understand his speeches and policies. However, even as a young boy, my reaction towards him when hearing him on the news was one of warmth and assurance. As I grew older and more interested in politics - especially as I then leaned towards the Conservative Party in the UK - I came to understand him as a champion of small government, low taxes and the victor of the Cold War. What this book illustrates well is that the popular caricature of Reagan misses the true essence of his political philosophy; that aspect of his nature that would make a young boy like me enjoy hearing him speak.
Conservatism in recent years in both the US and UK could be seen as successful, but this hides the fact that this success owes much to the electoral inadequacies of their opposition. What this book reveals well is that Reagan was a true ‘Roosevelt Liberal’; his faith was in the common citizen and his vision was for opportunity to be open to everyone - not just the exceptional few - and that this was the key to his extraordinary electoral successes. Bush 41, and Obama 2008 and 2012 came closest to matching Reagan in communication terms and saw the fruits this brought, but those who misunderstood his legacy have faced electoral punishment. Both the political left and right should take time to understand the basic moral of this book - your concern should be what the people actually want, and not want you think the people should want

As a fan of Reagan, this book pulls the curtain back and gives insight into how Reagan made decisions. Should be mandatory reading for all politicians.

The REAL Reagan and principles to live by

Olsen's historian approach breathes new life into the saga of Ronald Reagan, revealing that it is principle, not ideology, that drove him. All politics boils down to principles and it's easy to see why Reagan was so successful by wearing his love for the American people on his sleeve. All politicians would do well to follow his lead and remember that it is outcomes people want, not process, not ideological exercises. Principled politics led by principled leaders, not ideologues.

Great Book, different and detailed look at the Gipper

Great book. Very detailed research that informed the central theme. Lots of great quotes from Reagan's early years. A different perspective on President Reagan and the Republican Party. Would highly recommend to anyone interested in politics.

Where does Working Class Republican rank among all the audiobooks you’ve listened to so far?

It ranks solidly in the middle. Ronald Reagan and Franklin Delano Roosevelt are presidents I strongly admire. It ranks in the middle because the subject is narrowly focused on Reagan's conservative principles are rooted in Roosevelt's New Deal principles. The author makes his case effectively although he sometimes belabors his points.

If you’ve listened to books by Henry Olsen before, how does this one compare?

I haven't listened to any other books written by Henry Olsen.

Have you listened to any of Derek Shetterly’s other performances before? How does this one compare?

I don't know but Tommy Lee Jones should be in it.

The book is persuasive. The author does a good job of connecting Roosevelt and Reagan's legacies to Trump and the modern conservatives.

Would you consider the audio edition of Working Class Republican to be better than the print version?

I don't know yet. I have finished listening to "Working Class Republican" but have not yet started reading it.

What was one of the most memorable moments of Working Class Republican?

Time for Choosing and Reykjavík Summit

All of them were good; however, Time for Choosing and Reykjavík Summit were best.

No ... there were times I had to stop and ponder what Reagan had said in a speech or written in a letter.

The back story of the book and its research would appear to be applicable to many other historical figures, surprised more historians haven't executed similar endeavors.