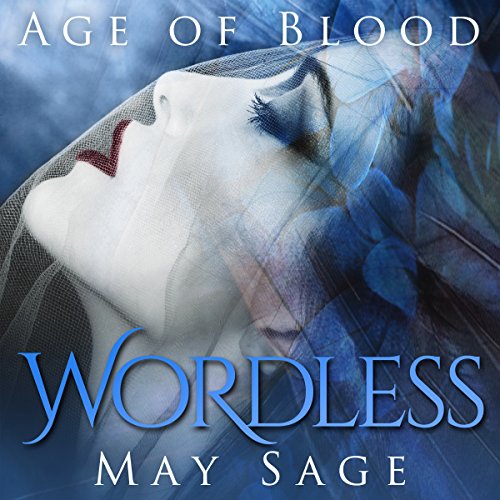 By: May Sage
Narrated by: Lisa Zimmerman, Kale Williams

The world belongs to vampires now, and 21-year-old small town girl Fay Turner thought it meant that every human like her was destined to be a slave or a servant.

Then, William, an ancient vampire, came and set her free.

Enrolled in the prestigious New York Academy, alongside humans and vampires alike, she learns that she wasn't one amongst many; she was a victim. Never again. Her goal: becoming kick-ass. Then, maybe she'll somehow manage to tell the man who saved her everything she needs to say.

Developing an infatuation while solving a crime linked to an influential patriarch - and earning plenty of enemies in the process - is probably not a great idea; it doesn't stop William. He just can't help himself, wherever he goes, Fay is foremost in his mind, consuming him until he knows he has to have her.

Age of Blood is a series of steamy, paranormal romance novels with dark and explicit content.

Each book is a stand-alone.

What listeners say about Wordless

I have been looking for books 2 and 3, however they are not available via Audible or Kindle. Why not? This story has me hanging by my nails. To me it's not a stand alone as described in the description . Excellent job Ms. Sage!!

I love vampires and grab almost every book with them in it. However, this one surprised me a little. I didn't think I would like it as much as I did because of how short it was. But it was really good and drew me in. Faye is a sweet woman who is learning who she is and what she wants in this world. Love a strong female lead that knows asking for help doesn't make you weak.

William is an old vamp with a taste for sex and protection. He doesn't see humans as only a meal ticket but as equals. He saves them one at a time.

I don't have much to say without spoilers but I really did enjoy this book. Oh the narration was spot on! Great job!

This story was interesting and I liked the fantasy version of the world. However, the last chapter with the HEA seemed rushed and the epilogue raised more questions. The narration was terrific.

It’s not the best think I have read and there are descriptive scenes between the Hero and another woman which I found uncomfortable to listen to. But overall it was enjoyable.

I enjoyed this story. The narration was excellent. I will definitely read the next book in the series. I would like to know what plot is developing with the paranormals of this series. I want to find out more about Fay and her heritage and see how her relationship is affected.

This is the first May Sage book/audio I've experienced. I thought the PNR world created was really interesting and the characters were pretty sexy. I would have like to see more action between Faye and William honestly, but this book definitely set up their world and introduced me to something I'd like to read more about. I thought the narration for this audio book was right on the money. Both narrators were engaging and didn't just talk or drone through the story. Since I'm picturing Williams as a more masculine alpha type of character, a deeper voice may have helped a bit, but it was still really good. I would recommend to others for sure.

Sexy fantasy with a dash of mystery. I need more!!

This is a great story. I was afraid that because the book isn't very long that there wouldn't be much detail or development, but I was wrong. May Sage does a wonderful job at world-building and character development. I found Fey vulnerable, yet feisty in just right measure. William was hot. Lol. Handsome, rich and a totally hero. What's not to like? I loved the little nods to Twilight because you gotta add that into a vampire book, duh. I wasn't expecting the cliffy at the end, but very happy that the story continues.

The narration in this audio was really enjoyable. I'm definitely looking forward to the next installment of the story. Like this needs to come out pronto because I'm dying to know what happens!!

For a quick read-sure but if you get invested in character then maybe not.

I was intrigued by the storyline of this book. The characters were well built as was the setting. Faye is a strong woman and showed great depth of character and Jessica another kick ass woman- nice to read of a strong females in what seems a male dominating world. William was very engaging and alluring.. The narrators were portrayed the story very well. But the abrupt rush to end the story left me unfulfilled and the book lacking for me.

I felt like this book had great bones and could have been fab if fleshed out more but ended abruptly. The rush at the end to wrap up the story I feel took away from it. I was disappointed to see that the next in the series moves away from Faye and William so these issues are not resolved.

Have you listened to any of Lisa Zimmerman and Kale Williams ’s other performances before? How does this one compare?

No I haven't, but I really enjoyed their performance.

Did Wordless inspire you to do anything?

Look for book 2 to find out of it was continued.

this is my first book from this author. And now looking forward to the next book! just a teaser.

Well, that was a waste!!

**Some Spoilers* First of all, the ONLY redeeming aspect of this book were the narrator's. THAT'S IT! This is an explicit adult book, if one can even call it that at a whopping 11 chapters. So if you don't like sex or are triggered by non- consensual sexual situations then this isn't the book for you. The story starts off with sexual situations so you're immediately immersed in scene that you're not understanding what is going on or whom is who and why. There is no character development which doesn't give you a remote feel of each MC in order for them to sink into your psyche. They're just THERE, in all their one dimensional glory! We have the ever typical barely legal "virgin" that is so desired and "rare", being done with by any and all, in all ways BUT the actual penetrative act with bodies. She cannot stand being used yet the moment she's alone, she pouts because she was sent away without getting pleasure for herself. oh, and let's not forget that good old insta- love was also front and center here. Was there a plot? I haven't a clue because the author went into endless directions that made zero sense to formulate a plot!! Endless characters were thrown in the mix and countless inner musing from the MC's that were nothing more than inconsequential and or sexual fantasies for one another. Then, before you know it, they have sex and of course, she's a absolute pro and he orgasm's within 2 mins. He tells her he wants to marry her without ever spending time with her and absolutely no getting to know one another. oh and of course, this is left off with a cliffhanger because not only are they vampires but she's also a witch and he tells her he's a dragon.. end scene! This would have been an interesting end that I may have looked forward to the next book to see what happens but I struggled to finish this as it was at a laughable 11 chapters. You would've thought a teenager wrote this, were it not for the detailed sexual content. I would not recommend, even if it were free.