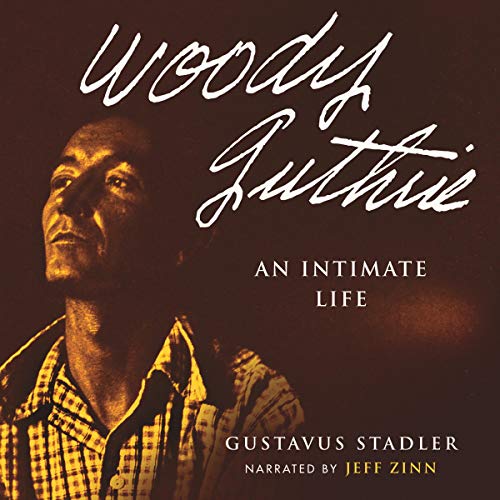 By: Gustavus Stadler
Narrated by: Jeff Zinn
Try for £0.00

Woody Guthrie is often mythologized as the classic American "rambling man", a real-life Steinbeckian folk hero who fought for working-class interests and inspired Bob Dylan. Biographers and fans frame him as a foe of fascism and focus on his politically charged folk songs. What's left unexamined is how the bulk of Guthrie's work - most of which is unpublished or little known - delves into the importance of intimacy in his personal and political life.

Woody Guthrie: An Intimate Life is a fresh and contemporary analysis of the overlapping influences of sexuality, politics, and disability on the art and mind of an American folk icon.

Part biography, part cultural history of the Left, Woody Guthrie offers a stunning revelation about America's quintessential folk legend, who serves as a guiding light for leftist movements today. In his close relationship with dancer Marjorie Mazia, Guthrie discovered a restorative way of thinking about the body, which provided a salve for the trauma of his childhood and the slowly debilitating effects of Huntington's disease.

Rejecting bodily shame and embracing the power of sexuality, he came to believe that intimacy was the linchpin for political struggle. By closely connecting to others, society could combat the customary emotional states of capitalist cultures: Loneliness and isolation. Using intimacy as one's weapon, Guthrie believed we could fight fascism's seductive call.

“Woody Guthrie is a miraculous whirlwind through early- and mid-20th century US history and culture. Under the cloak of biography, Gustavus Stadler has written a meticulously researched and stunning kaleidoscope of events, music, people, and populist movements that have influenced our lives since. Stadler’s scope for contextualizing Guthrie’s provocative work is expansive - leftist politics, Pete Seeger, Sacco and Vanzetti, gay rights groups, racial violence, the history of psychiatry - and evocative. At its heart, this is a book about how art and intimacy have changed our ideas of equality and human rights.” (Michael Bronski, author of A Queer History of the United States)

“In this groundbreaking study, which focuses on Woody Guthrie’s later years, Stadler’s uniquely multifaceted and interdisciplinary approach to Guthrie’s complex, tragic, and fascinating life provides us with fresh perspectives and important insights into how this iconic figure pushed boundaries in his writing, music, and politics by redefining the role of intimacy.” (Kip Lornell, coauthor of The Life and Legend of Leadbelly)

What listeners say about Woody Guthrie