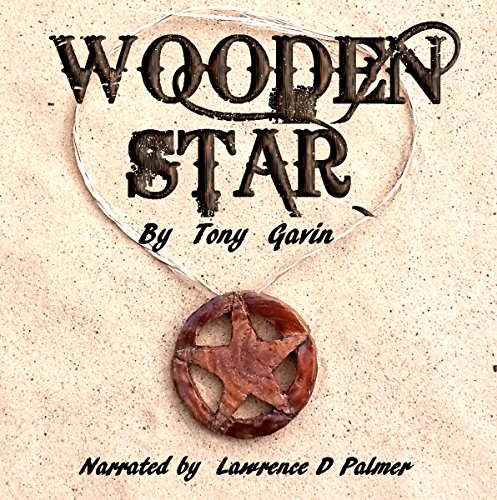 By: Tony Gavin
Narrated by: Lawrence D. Palmer
Try for £0.00

Aging bounty hunter Cody Stenger determines to retire from his violent lifestyle and to find somewhere peaceful to settle down. He finds himself in the small town of Three Points Arizona where he befriends a small boy and his mother. Not wanting to be drawn in to the problems and corruption perpetrated by the deputy and his kin in this small town, Stenger attempts to move on but trouble follows him. Stenger then unwittingly seriously injures and almost kills the young boy, forcing Stenger to return with him to town for medical assistance. Here his troubles quickly escalate and now fighting for his life Stenger is forced to deal with the corrupt deputy, his kinfolk and their outlaw associates. Relationships and romance culminate in an explosive ending.

What listeners say about Wooden Star

Only my 2nd western but it took me back to when I was a kid growing up watching John Wayne movies. The pace of the book was quick with a traditional wild west theme centred around an ageing bounty hunter and his last job. The narrator took a chapter to get use to but grew on me, he reminded me of Walter Brennan the actor who played the jail keeper in the John Wayne movie Rio Bravo.This is my second Tony Gavin audio book and I'll be keeping an eye out for any of his future books but I feel this is a book that would especially appeal to an American audience with a strong sense of justice and moral fibre.

Aging bounty hunter Cody Stenger determines to retire from his violent lifestyle and to find somewhere peaceful to settle down. He finds himself in the small town of Three Points Arizona
amazing book enjoyed from start to end

I was so into this western. Cody the main character is a bounty hunter ready to settle down. He thinks. After he turns his last bounty in some shady guys in the town turn up the heat. Cody our hero is ready. What he didn't know is that he was going to get some needed help from some surprising people, a boy and his mom.

This is really good and well worth listening to even if a western is not your norm. Everyone needs a good hero to make that last stand. And Ever hero deserves a happily ever after. But I felt that the mom and the young boy found a happily ever after too. I think that just added to my enjoy of this audio book.

About the author. Very impressive how he was able to include so much action, supense, and a romance in this story. Good job! I would listen to this again.

The narrator Lawrence D. Palmer: What a great job in this western. He used this old wild west voice that was so on it. It helps put you the listener in the story time line.

I received this audio book free in exchange for an honest review.

When choosing a western I am always scared it was going to be a cookie cutter where the good bar guy is up against the bad guy and of course the good guy wins. This book is so much more as a matter of fact I am hard-pressed to think of another Western like this one. I find this author writes such originals although there is only to buy him that I know of I love to both of them and recommend them highly to those who love westerns.