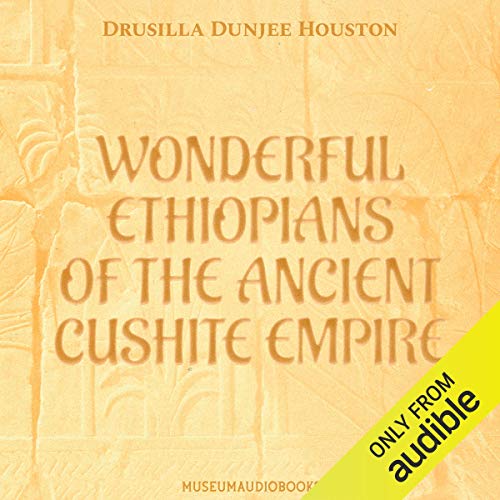 Drusilla Dunjee Houston (1876-1941) was a teacher, journalist, and self-taught historian. Inspired by the works of WEB DuBois, Houston undertook a quest to discover African history from an African American perspective. In Wonderful Ethiopians of the Ancient Cushite Empire, Houston identifies the Kushite civilization of Sudan, with its capital city Meroe, to be the cradle of humanity. She examines ancient Egypt to the north, the land and people of Ethiopia to the south, and on to Arabia, to find elements of Kushite culture. From there, she turns her gaze to Mesopotamia, to the land of Chaldea and to Babylonia, the land of marvels, and beyond to the Medes and Persians. Finally, Houston investigates the civilization of India, Hindu religion, and literature to round off her interesting thesis.

What listeners say about Wonderful Ethiopians of the Ancient Cushite Empire

the book is old and filled with misinformation.

take everything with a huge grain of salt.

This is not a history book. Do not buy.

This is like the Ancient Aliens show on the History Channel.  I actually want to study Ethiopian History.  Whatever this is, it isn't that.

Author's claim: Ethiopians/Kushites spread their civilization throughout Africa, Western Asia, North and South America,  and Europe.  The Atlantians (yes. that Atlantis) settled on Africa in the form of the Kushite empire.

the truth: Ethiopia/Kush has a long and storied History all on its own.  It doesn't need to borrow from other cultures History. They pretty much stayed where they were aside from when they conquered Egypt and Yemen.

Author's claim: The Kushites/Ethiopians/Atlantians discovered electricity and flying machines.  This so impressed everyone else that the Kushite kings were made the gods of Greece, Egypt, Etc.

the truth: There has always been a lot of syncretism in the Mediterranean. There is an outside chance that there was some historical figure that was turned into the myth of Hercules, but that is either really really hard to pin down or outright impossible. If someone in the ancient world had a functional air ship, they would have conquered everyone else, and they would probably still be in charge.  Why would they just put aside those weapons and be conquered?  fast forward to the Second Italian-Ethiopian War.  They would have killed to have more technology. They were doing everything they could to modernize, and they couldn't do it in time.  if they had a trump card they would have played it and kept their 2000 year unconquered streak going.

seriously, what is the point of this?  "We are the most advanced and wealthy nation on Earth.  well, that was fun.  Let's stop doing that."

This is a huge part of the problem.  It took until the 1990s for Oxford to change the preface of their Ancient History that said something like "Of course, the History of civilization is the history of the white man."  Africa has History.  It has culture.  it's almost as if author believed that racist crap, dropped acid, and toured the history museum.

The basic gist of the book is that some sort of prehistoric black African empire covered the entire Earth because ancient texts talk about Ethiopia.  "Ethiopia" is Greek for land of the black people, and "Ethiopian" just means "black person" in ancient texts.  The author checks the boxes for antisemitism, general racism, and anti-indigenous colonialism with alarming rapidity.  The worst part, though, is that the author seeks to erase black African History in the process.  African History is beautiful.  It should not be erased or papered over in response to racist Victorians.

Because this book is so anti-African:
Cool African History fact 1: the Kingdom of the Kongo rented the Dutch navy with cash it had on hand.
2:Great Zimbabwe (kinda like a castle) has architectural techniques that wouldn't be discovered in Europe until 500 years +/- after it was built.
3: The Bubi used general strikes to shrug off three successive colonization attempts. It worked.
4: West Africa has/had a native form of a federalized democratic republic where the town would tell the elders what they wanted.  The elders from other towns would get together and discuss it and implement the will of the people.