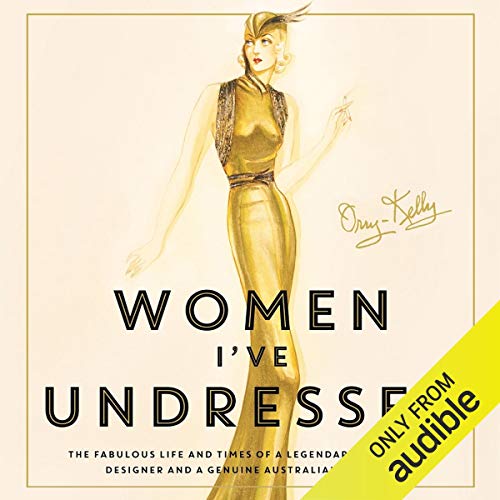 By: Orry-Kelly
Narrated by: William McInnes
Try for £0.00

Found in a pillowcase, the fabulous long-lost memoirs of a legendary Hollywood designer - and a genuine Australian original.

Orry-Kelly created magic onscreen, from Casablanca and The Maltese Falcon to Some Like It Hot.

He won three Oscars for costume design. He dressed all the biggest stars, from Bette Davis to Marilyn Monroe. He was an Australian. Yet few know who Orry-Kelly really was - until now.

Discovered in a pillowcase, Orry-Kelly's long-lost memoirs reveal a wildly talented and cheeky rascal who lived a big life on and off the set. From his childhood in Kiama to revelling in Sydney's underworld nightlife as a naïve young artist and chasing his dreams of acting in New York, his early life is a wild and exciting ride.

Sharing digs in New York with another aspiring actor, Cary Grant, and partying hard in between auditions, he ekes out a living painting murals for speakeasies before graduating to designing stage sets and costumes.

When the kid from Kiama finally arrives in Hollywood, it's clear his adventures have only just begun.

Fearless, funny and outspoken - Orry-Kelly lived life to the full.

I really got into this book! I'm into Classic Movies & knew the name Orry-Kellly from his many credits on Turner Classic Movies. I've always been a fashion follower--with a Bachelor's degree in it. This book covers both of these interests & a lot more!
Lots of humor, Art, History, sprinkled with an Aussie geography lesson. A little slow at the start, but worth getting through to the heart of it.

A fantastic insight into Orry-Kelly

This book is Orry-Kelly's story, told his way. It delves into his life and times, he treats everyone the same, from a star to strumpet, he tells it like it is. I found his description of Sydney fascinating which gave me a whole other feel for the city I live in. This book is very un tabloid. It's just Orry's story.

A gossip column, not a book.

I am not a fan of "tell all" books like this. However, as a costume designer myself, I was excited to hear about someone else's experience in the field. Peppered in between some juicy celebrity stories, I was hoping for the author's inspirational stories of struggles- such as adjusting to America as an immigrant, fighting for his passion of costume design, and struggling to make it big in Hollywood etc etc. Wow was I disappointed!

I stopped and started this book three times before I finally put it down . I could not get to the end. I was so bored of listening to the author's stories about partying while his mother paid for his expenses, long lists of women who I don't know and what they were wearing at which party, and pointless gossip.

The narrator was very good. Other than that, this book was a complete snore and a waste of my time.

I'm sure Orry-Kelly led a glamorous life. Unfortunately, there was very little glam in the book. It focuses a lot on his early years... the somewhat hard-scrabble times he went through which inevitably led him to Hollywood and fame as a top-tier designer for the biggest stars of the Golden Age of Film.

I guess, since this was written while some of his 'designees' were still alive, he didn't name drop as I had wished for fear of offending or of legal pitfalls.

I wanted the dirt but I got the edges of the mud puddle. Oh well.