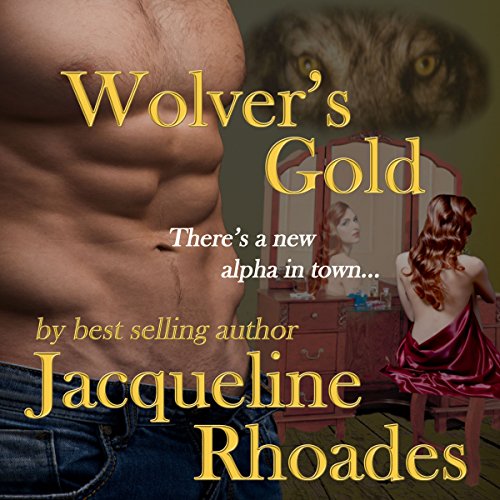 By: Jacqueline Rhoades
Narrated by: Leah Frederick
Try for £0.00

Finding gold where you least expect it... Lone wolf and Special Investigator for the ubiquitous Eugene Begley, Challenger McCall is sent to the town of Gold Gulch to take care of a problem that might involve the exposure of the wolver community. For McCall, it's like stepping back in time - 150 years back in time. Gold Gulch is a tourist attraction where the wolvers take their work so seriously, they continue their Victorian lives long after the tourists have gone home. Much like their 19th century counterparts, the women are overworked and underpaid. Rachel Kincaid is one such woman. Exercising the only power she holds, she has become a wolver oddity; a spinster who refuses to mate. Why would she, when she already has to take care of the short-staffed hotel, its restaurant, and her ne'er-do-well father? Angry and bitter, Rachel decides she deserves a better hand than the one she's been dealt and finds herself drawn to the handsome new sheriff, Challenger McCall. Why shouldn't she, for once in her life, enjoy the same freedom as the Soiled Doves on the hill? Things get complicated when Rachel's wolf awakens after a long sleep and the town's women seem to awaken along with it. Papa's gambling debts leave them on the brink; the pack is at risk; and the women rebel. Oh, and don't forget the murders. If ever a pack needed rescuing, Gold Gulch is it, but as the girls up at Daisy's Bouquet point out - A smart woman needs to look after herself!

What listeners say about Wolver's Gold

Would you listen to Wolver's Gold again? Why?

No would definately not listen again the narrator cannot say wolf! She insists on saying woof and as the book is about wolves its a constant distraction! I can't understand how the editor or director did not correct this at the time of recording!

The fact that she cannot say WOLF

I loved the story but the story teller ' pronunciation of wolf sounds like she is saying woof, very irritating (sorry)

I love this series, it's got everything. From baddies and heroes, to romance and laughs. I'm hoping for loads more

Leah Fredrick needs to learn how to say "WOLF"

You would think after the bad reviews in the earlier books about her mispronunciation of the word WOLF, which is such a prominent word in the book, Leah Frederick would try better in consecutive books. NOPE. She still says "WOOF" and "WOOFERS" in place of "WOLF" and "WOLVERS" I ended up yelling at the book several times, and tried really hard to not hate the book because of the narrator. I would suggest reading the book instead of listening to her narrate.

I quite enjoy this book

Well so far I've enjoyed every book in the .
The wolvers Seri I'm joining the plot , suspense, and the romance the characters have been in-depth and unique in their own way

What did you love best about Wolver's Gold?

The humor and the wonderful characters

What was one of the most memorable moments of Wolver's Gold?

when the women took their town back

Which character – as performed by Leah Frederick – was your favorite?

I have to say I am so hooked on this series, each book is just as good or better than the last. I love this authors writing style and her imagination. The characters give so much not only to each other but to us the readers as they take us on a wonderful journey into their pack as they go through their every day lives and trials to be the best pack they can be. As you find in this pack not everyone is for the pack and what is best. Rules are broken women are cut to the bone as they are little more than slaves. It takes one man coming to a small town turning it on it's ear to stir things up and hopefully get it back to the way things should have been done to start with. The author gives you a wonderful story which includes heartbreak, death, hurt and pain as she bring the characters to their true meaning and gives them hope for a better life.

Come take a step back in time as you read about things you would have seen many hundreds of years ago. It seems that Gold Gulch needs to move up to more modern times. This town is a tourist attraction that keep the Victorian lifestyle alive only they never get out of it even when the tourist go home. These wolvers want to keep their women out of the loop making them believe they cannot think for themselves. Women can't own property and have little or no money. The men of the pack control everything keeping the little women busy cleaning and cooking why the man live it up.

Rachel has had enough she will not let any man control her. She doesn't every plan on finding a mate, she likes her life just the way it is. Well not just like it is but the best she can have it that is until the sheriff comes to town and makes her heart beat a little faster. She starts thinking things she shouldn't as her wolf comes out to play.

You know whatever Eugene Begley, has his hand into there is going to be some tempters rise and some hearts beating to their own beat. He has a way of matching wolvers up and I do believe he gets a kick out of setting back watching the sparks fly.

Challenger is sent to this small town to find out what the problem is. Things just aren't adding up as the birth rate is down and no one seems to every smile. The women are old before their time and the town doesn't seem to be making much money. Challenger has his hands full not only with the town and their people but finding out what is going on and putting it right. Not to mention Rachel who he can't help but make that red hair tempter glow.

What the author brings to the table is one well told story full of humor, sparks, passion, danger and lot of tempters flying. Ms. Rhoades gave me a tale of a wonderful story that I have come to expect from her writing. Before you are through you yourself will believe in wolvers, packs and honor as the woman rebel and raise some tempters as they bring the bad wolvers down and get their town back. I love the characters some are just busy bodies why others just keep you laughing. The author brings the reader passionate love scenes as she keeps you guessing what will happen next. I can't wait for the next one it looks to be as good as this one. You really should give this author a try I am sure you will love her wolvers as much as I do.

Jacqueline Rhoades is a brilliant and extremely gifted author. I think I've listened to many books on shifters but the way Jacqueline tells about the wolvers and the way they can change is unique. Her vision on her description on how and when a silver changes, along with an alphas human mate is perfection alone. Giving these solvers a story is an extra bonus. This story takes place in a tourist town called Gold Gulch, a place where people work hard, especially the females. They are over worked, too tired to go over the moon, and life there is like living in the Victorian age. Rachel Kincaid has helped her papa keep the hotel up and running, even though she'll never own it, so she's decided she'll never find a mate. Things change for everyone at Gold Gulch when a lone wolf and Special Investigator, Challenger McCall is sent there to learn what's going on and expose this wolver town. He doesn't plan on staying long, long enough to get answers and get justice. He doesn't expect to like it there, nor did he think he would find himself a mate with Rachel Kincaid. Rachel doesn't expect her wolf will wake up after being asleep for years and it complicates every plan she has ever had. She didn't know her Papa's gambling has put them in debt with everyone, forcing her to have to choose between 2 mates, both she can't stand, but she's worked so hard to keep the hotel in her family. If she
doesn't choose a mate the hotel will be taken, if she mates, it will be taken, there's no winning and being happy, no matter what she decides. Challenger, the new cop and outsider to most, will change everything with help from some new friends he's made, and even Rachel helps in this battle to get Gold Gulch back to the way it was before and give women their rights back as well. This story is perfection all wrapped up in one amazing story.

Narrator, Leah Frederick did a wonderful job in her telling of Silver,s Gold. She amazed me and kept me immersed from start to finish. She brought such life to this story and I felt for Rachel and many of the other wolvers there. I connected to this story from the start, I bonded with most of the characters, and I felt their pain and happiness as well. Leah did a great job with distinguishing accents and voice changes with each and every character. Overall, a perfect 5 🌟 eating.

Wolver's Gold is a nugget of fun

The Audio book was fun to listen to. The character of Rachel was well developed and the concept of old times in today's world was new. The majority of the narration was ok. The only complaint is that Leah cannot pronounce "wolf". It comes out as "woof' dropping the L. It was distracting.

I have been following this series since I discovered it. This book is much better than the previous one and has reignited by love of this series. Very good read.

Didn't they learn that this narrator ruins the story. Reminded me of middle school acting. Poor choice

Another great Wolver story. I've enjoy all the past books, and look forward to the next one!

I Loved it! it was so different than most because it had so many old ideals and the old way of thinking. I was dying when the women had to be so submissive, I could never do that. it's crazy to see how far the world has come. I LOVED the character development! You really felt for them. I fell for Arthur and Rachel wolf lol they have fun personalities.

I love these books but especially this one way to go on this book. It has a great story line