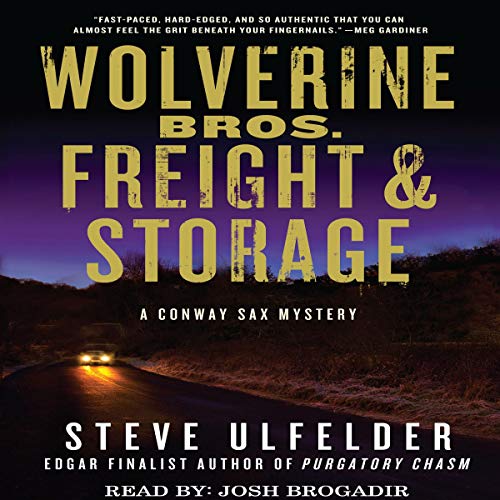 Conway Sax is back in a thrilling and heartrending new novel from critically acclaimed, Edgar-nominated author Steve Ulfelder

Conway Sax is a man on a mission - this time in Los Angeles, where he uses his race-driving experience in a desperate bid to rescue Kenny Spoon, a washed-up TV star who's been kidnapped. It's a favor for Kenny's mother Eudora, Conway's dear friend and a fellow member of the Barnburners, his tight-knit maverick AA group.

After hauling Kenny back to Massachusetts, Conway finds himself caught between Eudora and her two sons: Kenny, and Harmon, a cop who resents his talented, troubled half-brother. Each member of the Spoon family distrusts and even despises the others, it seems...and each has a past full of dark secrets that may explain why.

While Conway tries to learn why Kenny was kidnapped and protect him from further harm, a shocking murder devastates this complex, all-too-human family. Conway vows to find the killer and avenge the death, but each clue only points to more suspects.

Things get even more complicated when Conway, separated from his girlfriend Charlene, begins a passionate affair that can't help but cloud his judgment. The more secrets he uncovers, the more danger he's in as this masterfully written pause-resister builds to a wrenching confrontation.

"Wolverine Bros. Freight & Storage is tough and full of heart, just like its hero, Conway Sax. It's fast-paced, hard-edged, and so authentic that you can almost feel the grit beneath your fingernails." (Meg Gardiner, New York Times best-selling author of The Shadow Tracer)

Conway Sachs, one time mechanic and ex-NASCAR driver, was also a recovering alcoholic. He'd been in AA for years, the fiercely protective and radical version, which is where he'd met Eudora, elderly perhaps, but more feisty than most women half her age. She'd eventually become his friend, and sponsor, defying the convention of male for male and female for female. So, when dying from cancer, she asks Sachs to find and bring back her now disreputable ex-Hollywood star son before she dies, of course he agrees. Even though it means rescuing him from a kidnap situation where Kenny (with the same startling blue purple eyes as his mother) is being held, naked, in an old jack-off parlour by a dangerous low life gang. And, as added bonus for Eudora, Sachs gets Kenny mostly clean for the return to his mother. Hours later she is dead but not by the cancer. And Sachs is determined to find out why.

Steve Ulfelder has written a thrill filled novel with plenty of action. But it is the characterisation which makes this book so good. There is a feeling of real people walking, or more likely runnibg, through these pages albeit it in unconventional circumstances. Told in the first person from Conway Sach's perspective, there are numerous little throw away comments which further enhance the reality, from the coats worn by two greyhounds to keep their almost hairless bodies warm in the snow, to the absent minded mental ramblings to postpone doing something of which he's fearful but knows has to be done. And the many times when he 'said nothing.'
All is further enhanced by the excellent performance of Josh Brogadir, who impeccably follows the text in emotional response, all the while reading clearly with good intonation and voicing the different characters with distinctive differences. Some are really quite funny. And that is another aspect to the book: although at times violent and unremitting, there's humour here, too, to lighten the read.

My deep thanks to the rights holder of Wolverine Brothers who, at my request, freely gifted me with a complimentary copy, via Audiobook Boom. Not having read any of this author's works before, I was very pleasantly surprised and will now certainly look out for more by him in the future.
A good pairing of book and narrator, and definitely recommended.

I didn't expect to get pulled in. I really enjoyed this audio book. I've added the other books to my wish list. I thought the narrator did a really good job. My only nitpick is that all the women/girl sounded alike. I was given this free review copy audiobook at myrequest and have voluntarily left this review.

What a ride!
This is my first Conway Sax mystery, and I definitely will be reading the others in the series - SOON!

Very entertaining, well-written and beautifully narrated - I love a good mystery, especially the edgy ones, and this one was great! Definitely recommended, and once you start, you won't want to stop!

I didn't know what to expect going into this book but I was very pleasantly surprised. The author did a very good job of playing heartstrings and getting you to really like and care for Sax in this book. The Narrator did a great job of bringing the characters and world to life. Biggest selling point is that now I will have to go back and get the earlier ones to catch up. I received a free copy of this audio in return for an unbiased review.