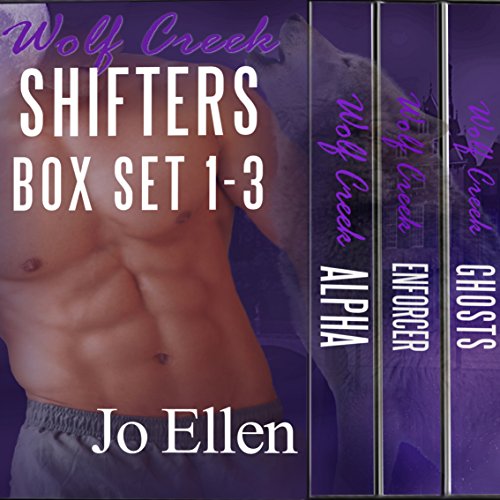 Wolf Creek Alpha: Lisa has no idea that magic actually exists until she is threatened by a powerful dark Fae - and until she meets the alpha of the East Texas wolf pack. Rafe is in charge of guarding the pack's secret magical pond. And now he's in charge of guarding Lisa, too. When a seer from the cougar pride has a vision concerning all shifters, Rafe must ask the light Fae to help him protect Lisa and the pond from the menace that threatens them all. Rafe knows Lisa is his mate. Convincing her is another matter.

Wolf Creek Enforcer: Melanie is an extrovert, loving and kind but tough and outspoken when necessary. Ian is an introvert; all he wants is to claim his mate and keep her safe. Grunting more than one-syllable words annoys him, but opening up to his mate becomes easier as he gets to know her. Well, somewhat easier.

Ian is the head enforcer for his pack. Something is pulling at him until he hits the road, looking for his mate. He finds Melanie, a free spirit hitchhiking in New Mexico. Once he gets her to his home in East Texas, he has to protect her from a wizard who wants her for her magical abilities.

Melanie can't wait to explore this feeling that led her to take to the highway. Finding Ian is more than she could have hoped for. The difficult part will be telling him of her family's legacy and the job she was entrusted with.

Wolf Creek Ghosts: Devlin meets his mate near his home when her car breaks down. He knows instantly she is his mate, but he has some concerns. She talks to imaginary people.

Olivia enjoys nice clothes, manicures, and helping ghosts that are lost or lonely. Talking to dead people is commonplace for her. Meeting a man claiming to be her mate and a werewolf blows her mind.

They will work together to send an evil ghost on to the fate that awaits his darkened soul.

Wolf Creek by Jo Ellen is a collection of three enjoyable paranormal wolf-shifter romance. Each book has its own storyline with appealing plots that capture the attention, containing drama, romance, magic, suspense, and humor. The characters are well-developed and connectable with distinct personalities. I especially liked how the brothers interact with each other and their mates. The romance and the suspense portion is well done and entertaining.

Jonathan Waters does an excellent job with the narration. He portrayed the characters and their connection with each other very nicely. Overall, this was an enjoyable box-set and, I recommend it. I was given a free copy of this audiobook at my request and have voluntarily left this unbiased review.

Book 1
I really enjoyed this book. Likeable characters with great personalities and some funny moments.
Book 2
Jonathan does a fantastic job with the narration of this book. His female voice is fantastic. I was laughing out loud with the humour written into this storyline.
Book 3
I’m really enjoying this series. Lovely characters, good storyline and humorous situations. Jonathan is brilliant, such a fantastic performance.

I don't know what is the problem in me..but ideally don't like book where the main character fall in love in like 2 weeks top.
she has never seen a wolf shifter and she is moving in house full of them after like ten minutes!
if the book wanted to create passion and love it didn't manege . I will give it back and I could not even finish it because I keep getting distracted during the narration because is so flat of a story. the narrator I think it's ok..

Wasn't that keen on the narrator, but the books were great! What a mix of drama and humour. Sassy women and men who didn't know what had happened to them! I can thoroughly recommend this box set.

the stories are funny, addictive for me some laugh out loud moments it's just a shame that the bloke narrating didn't do very good voices made me imagination of one of the brothers as a big olf with a low IQ.

heroines I grew to tolerate

The first story Lisa irks me with her know it all attitude all the time. Second story Mel is an in your face annoyance and an acquired taste. Book three Olivia is a haughty amazonian .The villains in each try to use the ladies to aid their evil machinations. The women weren't likable to me, but I tolerated them. Sometime you have to know when to back down and they didn't. With growth they get tolerable. The men (brothers) are warriors, protectors. and heroes. and they let the women have the lead. Happy wife; happy life. Adventure, intrigue and romance with a Djinn, wizard. and evil ghost. Check it out. The narration was good. I voluntarily listened to a free copy of this story and am giving an honest review.

worth the credit due to its length

The story was ok and performance good. Unfortunately this series was kinda bland compared to the vivid stories of other authors of this genre

Voices weird...sometimes speed is too fast and other times it's normal. Terrible voices for the women and some of the men.