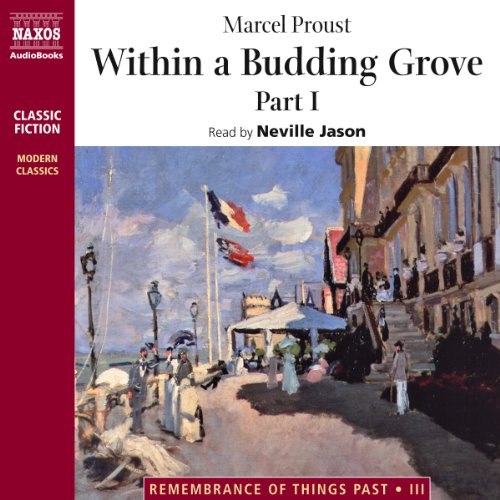 Within a Budding Grove, Part 1

The literary critic Harold Bloom wrote that Marcel Proust’s In Search of Lost Time is "widely recognized as the major novel of the 20th century". It is also one of the least read due to its great, great length. For a listener interested in delving into the universe that is Proust, Within a Budding Grove might be a nice place to start.

Performed by the award-winning voice artist Neville Jason, in an articulate British dialect, Within a Budding Grove is the second installment of In Search of Lost Time, and the first to bring its author widespread acclaim. Here Proust focuses on the narrator’s memories of his adolescence, particularly his fascination with Albertine, a young girl in the fictional seaside town of Balbec, France.

Within a Budding Grove, Part 1 is the second volume of Proust's monumental, seven volume, quasi-autobiographical novel Remembrance of Things Past, which has been described as "one of the greatest works of imagination of all time." As the young narrator succumbs to the charms of the enchanting Gilberte, the author presents us with an unparalleled account of the pangs of adolescent love. Proust has created from the raw material of his life a work of art of unsurpassed originality, filled with his own uniquely sensitive and subtle spirit.

What listeners say about Within a Budding Grove, Part 1

Within a Budding Grove is the second book of the seven-volume In Search of Lost Time / Rememberances. For audiobook purposes, it is divided into two parts, this being the first. As with this entire series, it is beautifully narrated by Neville Jason. This particular section covers, amongst others, social interaction with the Marquis de Norpois, infatuation with the actress Berma, discussion of the author Bergotte, social difficulties relating to Odette, now married to Swann, and a growing relationship between the narrator and their pretty redheaded daughter, Gilberte. Proust is an unhurried author, who delights in ordinary events, and this book is no exception. If you like really wonderful writing, a relaxed pace, and are after a break from a diet of thrillers, you will really like this.

running for the bus

It took me nearly a year to listen to the first book. I loved the leisurely pace of the narrator and his ability to convey the real thoughts behind the characters. I also loved the way he used slightly different voices to bring alive each character.

But the narrator of this second book in the series is terrible! He's rushing through the book. Rather than being transported to another time, I feel like I"m running to catch a bus. Such a disservice to this story to change narrators like that. I'm very disappointed.

All the Proust you need