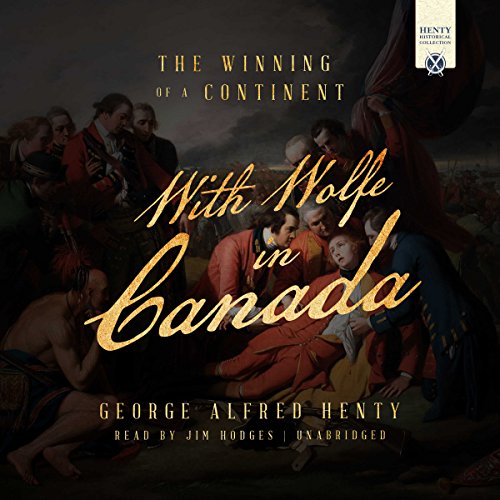 With Wolfe in Canada

Bring history back to life through Jim Hodges’ historically accurate, exciting, and edifying audio recordings. Shortly before the United States Revolutionary war against England, most inhabitants were her loyal subjects. France had control of much of southern Canada and the “western” lands of the current states of Pennsylvania and Ohio. Skirmishes abounded for years between English settlers pushing west and French settlers and her Indian accomplices. The Seven Years War in Europe spilled over to the colonies, where General Wolfe finally defeated the French in Quebec. This story includes depictions of the battles of Forts Duquesne and Necessity in Pennsylvania, and Forts Ticonderoga and William Henry in New York, and Quebec in Canada.

The Henty Historical Novel Collection, written by George Henty in the 1800s, covers many time periods in history throughout the world. In this collection, you will learn history, geography, and vocabulary while also discovering hero characters for your children to emulate. Study guides to enrich your learning experience are available at www.JimHodgesAudiobooks.com/product-category/study-guides .

What listeners say about With Wolfe in Canada

Good, but not Henty’s best book!

This book is several hours in even getting past laying the groundwork of the characters, and finally the main character is off to the “colonies” of the New World. From that point most of the book involves a great deal of historical happenings with the character more of a necessary tag-along in order to share the history. Overall, this is a decent book and the history and happenings are the main thrust. The character is a standard Henty character, yet much less skillfully woven into the fabric of the telling.

Our family has read out loud many of the Henty novels. I was so glad when audible started carrying them since our cassette tapes have worn out from overuse. We would read them aloud to our kids in late elementary school. Although they are targeted for boys 8-12 our 5 year old daughter would get sucked into the story. Jim Hodges is a great reader, so easy to listen to. People would often comment on my kids great vocabulary. I give credit to listening to Henty novels.

This is a delightful way to teach how Canada came to be English. There are many details of battles and yet it reads as an adventure rather than a dry text.