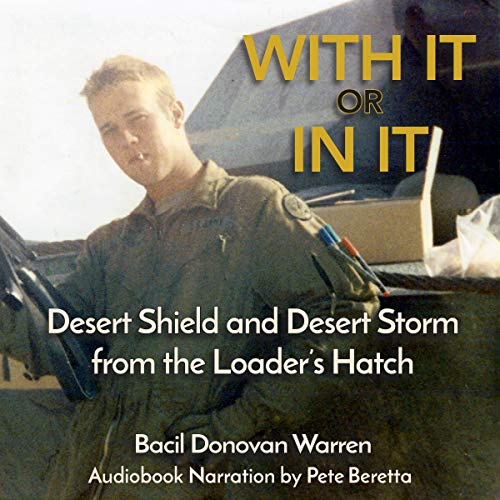 With It or in It

By: Bacil Donovan Warren
Narrated by: Pete Beretta
Try for £0.00

With It or in It tells a captivating and unique story of the 1991 Persian Gulf War as seen from the loader's hatch of an M1A1 tank.

Using humor and frank candor, author Bacil Donovan Warren shares his personal experience, as well as that of his fellow tankers, as part of the US Army's 3d Armored Cavalry Regiment (the "Brave Rifles") in Saudi Arabia and Iraq.

Warren recounts the initial shock of hearing about Iraq's invasion of Kuwait and his regiment's preparation for deployment during Operation Desert Shield. He describes the stress and sometimes mind-numbing boredom of being deployed deep in the desert of Saudi Arabia, constantly preparing for a possible Iraqi invasion. He recalls the terrifying experience of the start of the air war of Operation Desert Storm and the workman-like action during combat against Iraq's Republican Guard forces during Operation Desert Sabre. With It or in It brings clarity and focus to their unceasing efforts to bring the conflict to a swift and decisive end. Finally, Warren describes the triumphant return of the Brave Rifles to Ft. Bliss, Texas, and the waiting arms of their families and loved ones.

Warren's fellow tankers have called With It or in It "honest and moving" (R. Bell) and "almost identical to the experiences I had myself" (W. Compton). The commanding officer of the author's Troop during Desert Shield and Desert Storm remarks that With It or in It "brilliantly captures what is the rarely described gritty and demanding life of an armor crewman" (R. Schultheis).

What listeners say about With It or in It

Read the book, loved the audiobook even more!

Great story about one of the U.S. veterans during his tour in the Gulf War. It offers an insightful look at the preparations leading up to the Desert Shield and Desert Storm operations from the "loader's hatch" of a U.S. M1 Abrams Tank and follows the action as the attack against Iraqi forces unfolded.

Thank you for your service, sir!

I was in Desert Storm and was looking for some books about it. Not much out there. This is a decent book about one guys experience in Desert Storm. All sounds true and familiar to me.