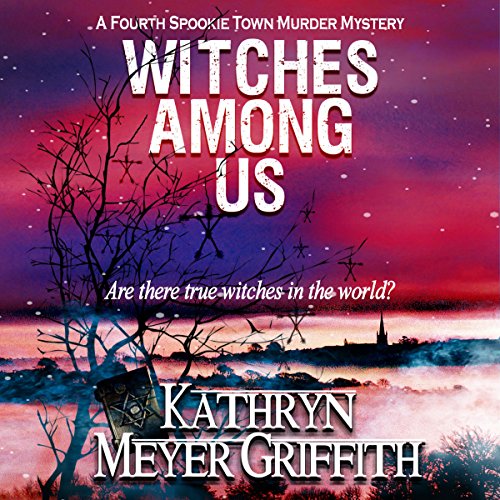 By: Kathryn Meyer Griffith
Narrated by: Rebecca Burns
Try for £0.00

Spookie is a quaint village often cloaked in fog and filled with mysteries. The usual eccentric characters are here for their fourth murder mystery and the case is one which really hits close to home this time for Myrtle, the town's Perry Como singing and wagon-pulling bag lady.

Her sister Evelyn, the local animal hoarder, is missing. Strange miniature figures fashioned of twigs are found hanging from one of Evelyn's trees as warnings. Because of them, Myrtle fears a coven of wanted-to-be witches she once knew, and escaped from, almost 60 year ago, could be behind the kidnapping because she stole their ancient black grimoire - and they want it back. But Myrtle doesn't want to let them have it because she believes the grimoire is dangerously real. The book mustn't fall into the wrong hands and the old coven's hands are covered in blood.

So Myrtle again seeks Frank and Abigail's help in getting her sister back, alive, and protecting the grimoire. What they don't know is a fourth addition to their team of sleuths, a mysterious psychic and new addition to the town, will emerge and join the battle...but whose side will she be on? Is she merely a psychic or is she something more? And will they get Evelyn back alive or will the old witches find and possess the grimoire first?

The fourth Spookie Town Murder Mystery. Sequel to Scraps of Paper, All Things Slip Away, and Ghosts Beneath Us.

What listeners say about Witches Among Us

I love the town of Spooky, I love the characters and growing up in a small town I found the closeness, especially Stella’s Diner, very true to life. I haven’t read the first 3 books in the series but this book can be read/listened to as a stand alone. The story was very intriguing to the point I couldn’t put the book down. The book did Leave me with a few unanswered questions so I will have to check back to see if the next book in the series will answer them.