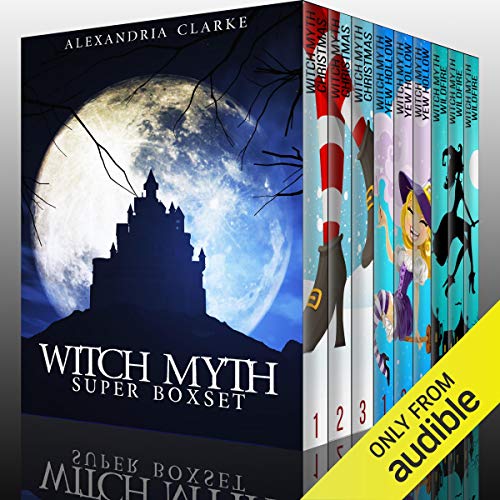 Best-selling cozy mystery author Alexandria Clarke brings you the complete collection of the highly-rated Witch Myth Christmas and Witch Myth Yew Hollow series. These stories have accumulated over 500 five-star reviews and have been boxed together for the first time! That's three complete series totaling nine books!

When one of her first-grade students goes missing the day after Christmas, Noelle Summers becomes an honorary detective for the Yew Hollow Police Department to find him. With help of her two best friends and her cousin Morgan, Noelle discovers that an evil witch has plans to abduct all of the kids in town. Can she find her student in time to save him and the rest of Yew Hollow’s children?

Morgan Summers hates talking to ghosts, but when the victim of a ghastly murder asks her for help from beyond the grave, Morgan can’t say no. Soon, Morgan herself is blamed for the murder, and the town is out for blood. Can Morgan clear her name, discover the real killer, and help her new ghostly friend cross over to the next life?

When a 16-year-old girl disappears from her hometown without a trace, stumping the local police force, the only person who has any hope of finding her is her older sister, Kennedy. The siblings share an otherworldly bond, which leads Kennedy to the peculiar, deserted town of Yew Hollow. Kennedy soon uncovers a coven of witches, a tragic secret, and something that she never knew about herself. When her number-one priority is her little sister’s safety, Kennedy’s decision to stay in or leave Yew Hollow is the hardest one she’ll ever make.

Great value but such terrible narration!

So firstly I have to say that these books are amazing value - 9 full novels for 1 credit! And the stories are fun, detailed and entertaining. But the listening experience leaves a LOT to be desired.
Firstly, the books are written from the first person perspective of an American woman. So why someone decided the second three books should be narrated by a Welsh woman is beyond me. It was completely jarring and you can''t relax into the listen for thinking about how wrong it sounded. And to top it off she completely mispronounced so many words it became a joke - runes being pronounced runs by by far the most embarrassing.
Secondly, the narrator doing the final three books, despite being North American (possibly Canadian?), had the most irritating way of over-enunciating while still having a boring monotone voice. And she also mispronounced words all the time. I genuinely don't understand how someone can grow up as a native English speaker and get these fairly basic words so wrong or how these people were employed as voice actors, despite being unable to speak their own language properly! I would point the finger at the producers of these audiobooks who not only hired these actors but failed to correct their multiple mispronunciations, and released the recordings with all the errors!
Overall these books are still worth listening to if you accept you sacrifice listening quality for value.

This story is runied by the spoken errors, thay sound like snake's with sssss at nearly every word and also one doing a Welsh accent for a character who is from the USA.

I do not recommend

There are so many things wrong with this audiobook, I don’t know where to begin.
Firstly, although there are several narrators, all are flat. All have so many pronunciation errors, I actually cringed.

The books do not follow a specific story line, which isn’t necessarily a bad thing, but they are disjointed and it took me some time to understand this.

The various book narrators, are from the perspective of various characters. There is overlap in the stories but narrators voice the overlapping characters, so very differently, there is absolutely no flow.

Loved it hadn't listened to witch books before but will be doing so from now on.

Loved the stories but I wish the the same narrator had read them all as it was quite off putting when it switched from an American to a British reader then back to another American.

Witch Myth books are the best

absolutely loved the set of books, I can't wait to read the next box set.

The Witch Myth stories are probably quite adequate for the genre, but I feel obliged to warn listeners that if you care about words being pronounced as they are intended don't read these.You have a choice - continuously stop and replay to see what should have been said or just let it go. All the Witch Myth narrators make mistakes - some much more frequently. Odd that no one edited the stories . I finally gave up on the collection .

Where does Witch Myth Super Boxset rank among all the audiobooks you’ve listened to so far?

What other book might you compare Witch Myth Super Boxset to and why?

anyone who can read

no - just listened - mindless fiction is just a good escape -

the narrator could not pronounce words - simple things like crocheting a blanket derailed the story because the narrator pronounced it crowshetting instead of crowshaying - so it became tedious to rewind and figure out what the story was doing because the words pinged the brain as being wrong and halted the flow of the story.

terrible narrators I tried! I wanted to like it

The narrator had no idea what the word she was reading were supposed to sound like.

Pronounciation is atrocious in 3rd set

Changing narrator from American English in set 1 to British English in set 2 was bad enough...but switching to a Frenchwoman speaking American English was just NO. No...no...no!!! I literally stopped listening. It was ridiculous. No excuse for that. Trust me, you won’t be able to overlook it. The series was ok. Good value...but the last narrator just made it not worth it. Hurts me to review it like this, but it’s just the truth.

I have enjoyed these books, but as others have said, the narration is is not very good to the point of possible distraction.
There are 3 sets of trilogies in this box set. So 3 stories in nine very small books (seriously, they could have and maybe should have just been 3 books total.) the first main problem I have with this set is that the order of the stories is wrong. I understand that there are other stories in the series but I thought, and hoped that the three that were chosen to go into a box set together would be in the proper order, and not have other stories that belong between them that are not included in the set.
The first story that plays had good narriation and was an entertaining story with fun characters. There were several things mentioned that sounded like there must be more to that story or situation that was just mentioned casually, so I figured that there are books outside of the box set that get into those.
Then the second story starts, and wait! Why is there a British narrator in a story about someone who is fully American? Instead of a young American, this narriation sounds like it is a story based on a middle aged British lady. Oh well, I can get passed that without too much thought about it. But then I realize that this story takes place before the one that I just heard. Several things that were mentioned in the first story were actually pretty big spoilers about the second story. That’s a bummer, why would they put them in the wrong order?
The third story was good, and was in the correct spot as far as these three stories are concerned. It is a bit distracting when the narriator doesn’t know how to pronounce so many common words. For example, pronouncing the L in salmon, or the A in cocoa. Also Salem was pronounced weird, and where it was pronounced incorrectly each time it was said, there were a few times when it was pronounced differently. So there were 2 incorrect pronunciations of the same word.
So for anyone interested in the correct order of the stories, the second story comes first. Then there has to be at least one other story that is not included in the set, because of things that are mentioned in the other two stories. I haven’t gotten into other stories in the series to give a name of what should be in there. Then the first story should be played second, and the last one is in the correct spot. But it takes place several years after the first one, so I’d be surprised if there are not a couple of others that belong in that space.
So, the stories themselves are entertaining and fun, but it would be nice if someone would put them in a proper box set where they are all together and in order. And some of the narriation could be quite a bit better.

The narrators switched between books and there were so many mispronunciation of words it was aggravating.

These stories were great, I loved how each one got more complicated and detailed. Having the different characters have their own perspectives was also awesome.

However, I am forgiving of narrators occasionally mispronouncing some words, but there was an abundance with all of the narrators in this book. To the point where I was getting irritated.
In the end I enjoyed these stories despite the errors and would recommend it to anyone who can deal with mispronunciations.

The stories are out of order. The best narrator is the first one. Either put the books in order, or just pick one narrator. This thing is just a hot mess!

pretty good story, though the narrator mispronounced so many words and it was very annoying.