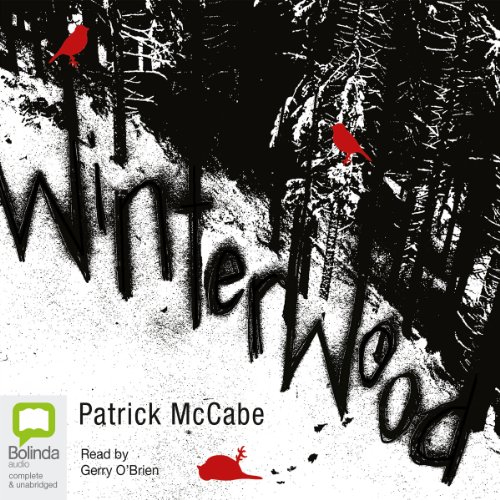 By: Patrick McCabe
Narrated by: Gerry O'Brien
Try for £0.00

Patrick McCabe's most disturbing, original and accomplished novel yet. From the Booker Prize shortlisted author of The Butcher Boy, The Dead School and Breakfast on Pluto.

A chilling, spellbinding and highly original new novel from the prize-winning author of Breakfast on Pluto and The Butcher Boy. Once, Redmond Hatch was in heaven, married to the lovely Catherine and father to enchanting daughter Immy. But then he took them both to Winterwood. And it would never be the same again...

In Patrick McCabe's spellbinding new novel, nothing - and no one - are ever quite what they seem. When Hatch, devoted husband and father, revisits the secluded mountains where he grew up, he meets Auld Pappie Ned. While he claims to be just a harmless local fiddler, a teller of tall tales, Ned sets off a cataclysmic chain of events in Redmond's life. From the mysterious disappearance of Redmond's daughter to the reluctant remembrance of a troubled boyhood to secret glimpses into an unstable marriage, everything soon spirals out of control.

Narrated with hypnotic precision and fractured lyricism, Winterwood is a disturbing and unforgettable tale of love, death and identity from a masterful novelist.

What listeners say about Winterwood

Whilst there’s no doubting the talent of the author and his poetic skill, I became uneasy listening to this anymore. The subject matter is distributed and I began to get fatigued with the constant reverence to the character Ned that Redmond shows. I haven’t the will to finish the book, and can only guess that perhaps they are two and the same. Overall this is not a book to inspire, offer hope, and enjoy. Critically I can see why it was revered, however those of sensitive disposition should stay away. It’s worth pointing out that the narration of the book is truly excellent, but after the kidnapping scene and then the failure to put it into any context. You are left wondering what’s going on, as the detail is glossed over in a veil of mystery, instead having to listen to more ramblings on Ned, A character, to be honest I would rather not spend so much time on.

Patrick McCabe is a master when it comes to bringing sinister characters to life and in Winterwood he excels. Gerry O’Brien’s animated reading of McCabe’s acerbic dialogue is so good that the voices - I hesitate to call them characters - felt entirely believable, indeed almost familiar, after just a few listening sessions. This had the effect of dramatically increasing the impact on me the listener as events unfolded. McCabe’s subtle yet deeply sinister plot is simply electrifying. Just a few chapters in and I could not wait to listen. I loved how the voices scattered tiny uncomfortable seeds of what was to come, ever so subtly. I was hanging on the edge of my (car)seat listening, eager for the story to proceed and to find out if suspicion was correct. I love how this writer achieves this so skilfully. It was truly tantalising, in the most disquieting of ways. Even more when one began to actually sympathise with the voices at times, which of course is a very creepy and bizarre phenomenon in itself. When I felt confident that I’d worked out what was really going on, that realisation only added to the exquisite tension as I listened on. I don’t want to give much away, but I had goosebumps and my spine literally tingled during one particular taxi scene. It was so clever and awful at the same time. The entire premise of the story is very clever and executed so well. A perfect double-act of subtlety and directness with tension and creepiness accruing masterfully throughout. It was a brilliant book and a very good reading. I felt sad at the end that it was all over and wishes for more. I will certainly listen to it again before too long.

Strange,sinister,disturbing. Sad and an uneasy read.
Thats how I'd describe this book. I preferred reading it than listening to it. only because Gerry O,Briens performance was so good and realistic it became somewhat disturbing.
if your looking for a light hearted fun read then this isn't it. it is however a great book...if not a bit macabre.
Read the butcher boy or carn. these are my favourite McCabe books.