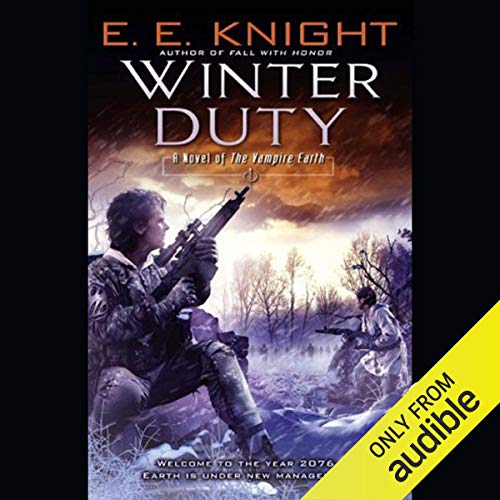 Maj. David Valentine and his fugitive battalion are the remnants of an expeditionary force shattered in its long retreat from disaster in the Appalachians. Between a raging blizzard, bands of headhunters, and the need to recover wounded soldiers lost during the retreat, Valentine is in for the toughest winter of his life.

And Valentine is losing allies fast. Some of the clans in the region have declared themselves in favor of the Kurians, throwing Kentucky into civil war. But the Kurian overlords have determined that the region isn't worth the effort of another conquest. Their order: extermination.

"E.E. Knight is one of the most consistently interesting writers in the military science fiction field. I wouldn't miss a book of his Vampire Earth series. They're great." (Charlaine Harris, author of the "Sookie Stackhouse" series)

What listeners say about Winter Duty

Most forgettable book in the series

I don't know if this book is a necessary read. It feels like a fluff piece more than anything. David's career doesn't change much, nor do the characters in the story. It feels like it could fit into the preceding novel and be recapped in the next novel without losing much. I love the series, and I'm a bit disappointed in how this book turned out.

Great story in the series. Knight never fails to deliver and Rummel completes the experience with some of the best narration I've ever heard

If your a fan of the Vampire Earth series the war goes on and Valintine struggles with the enemy and his own side.

The attack on the enemies lair.

A twist on the traditional good versus bad series

Another fantastic iteration of my favorite series.

Christian Rummel was the perfect voice actor for this series, I can't get enough!

another good one. can't wait to get to the next one. still a great series.

i am loving this series. there is always something next. keep up the good work. e.e.

Keep it relatively simple in regards to the number of characters, reinforce the goal of the story and make it clear what factions if you will stand for what. I'm not sure if it could be a four or a five.

What could E. E. Knight have done to make this a more enjoyable book for you?

Maybe the book less obscure. Unless your a follower of the continuing saga your lost but good. It's pretty bad when an author needs to explain in the begining whats going on, which didn't help. There are so many characters and strange creatures you cant keep up with them. I'm not sure they could fix it.

Did Christian Rummel and E. E. Knight (Introduction) do a good job differentiating all the characters? How?

No it didn't help, I wish the sample listen included this intro because when you hear it red flags go up and I probably wouldn't have wated my money.

I quit the listen, I'll save it for when I have nothing else to do.