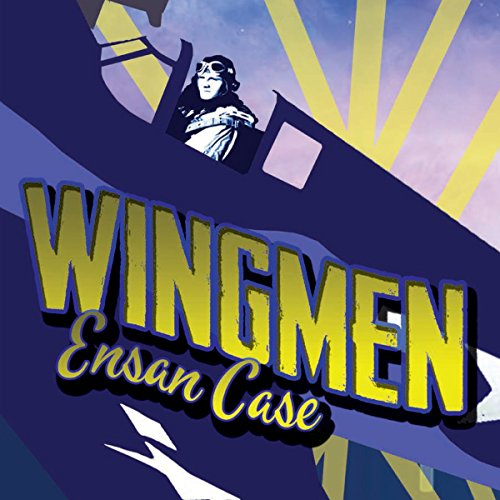 Jack Hardigan's Hellcat fighter squadron blew the Japanese Zekes out of the blazing Pacific skies. But a more subtle kind of hell was brewing in his feelings for rookie pilot Fred Trusteau. While a beautiful widow pursues Jack, and another pilot becomes suspicious of Jack and Fred's close friendship, the two heroes cut a fiery swath through the skies from Wake Island to Tarawa to Truk, there to keep a fateful rendezvous with love and death in the blood-clouded waters of the Pacific.

'... Wingmen is gratifying to read. It is the sort of book that should have and may have been written right after 1945, the sort of book that should have been published then, too, but of course it could not have been. I don't know what effect it will have on you, but this is probably how it will affect Case's fellow war novelists: Norman Mailer will clench his fists and swear and refuse to believe it, Gore Vidal will say, 'I told you so,' and James Jones will turn over in his grave.'' ( The Advocate)

So well written and ahead of its time!!

I have never reviewed a book in this particular genre mainly because I have never been compelled to do so. Not that I have not read any good MM books it's just usually the ones I find really good are the ones everyone finds really good so they already have tons of reviews. This book was written sometime in the late 70's. It is the only book this author ever wrote and because it had such a bad response he gave up writing and moved on to a different career. Which is a shame. I don't think the world was ready to read a book were their main characters were both in the military, in love and men. I NEVER read historical war books but something grabbed me about this one when I read the review and it was GREAT! The writing, action and characters were so well written. Yes it's got romance but really that is secondary to the book. You won't find vows of undying love spoken or the a pretty HEA wrapped up in a pretty little bow for you at the end. It's realistic not to say a bad ending at all but a realistic ending considering it takes place during WWII. I highly recommend listening to this book the narration is great the book is great a real find!