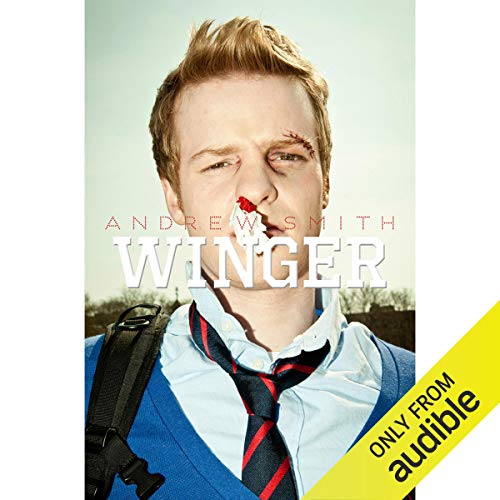 A teen at boarding school grapples with life, love, and rugby in a heartbreakingly funny novel.

Ryan Dean West is a 14-year-old junior at a boarding school for rich kids. He’s living in Opportunity Hall, the dorm for troublemakers, and rooming with the biggest bully on the rugby team. And he’s madly in love with his best friend Annie, who thinks of him as a little boy.

With the help of his sense of humor, rugby buddies, and his penchant for doodling comics, Ryan Dean manages to survive life’s complications and even find some happiness along the way. But when the unthinkable happens, he has to figure out how to hold on to what’s important, even when it feels like everything has fallen apart.

Filled with hand-drawn infographics and illustrations and told in a pitch-perfect voice, this realistic depiction of a teen’s experience strikes an exceptional balance of hilarious and heartbreaking.

This book goes in with a bit of a kick, we follow a few days in the life of Ryan Dean (that's his first name, no hyphen!) He is bullied, picked on, and has his head shoved down the toilet, and that's just the 1st chapter!

He is also in the O wing at school for naughty boys and shares a room with a bully.
He has good friends as well though, oh and he's in love with his best friend Annie, who thinks of him as a kid!

This book is funny and had some real laugh out loud moments, especially screaming Nedd, which I actually had to rewind and listen to again as it was so funny!

Think about what goes on in a teenage mind....yep it's all there.

Listened to this with my 13 year old son (I'm a mom:) on a LONG drive. This book made the time fly!!! At one point I had to turn it off for a sec so I could catch my breath to stop laughing😂😂😂. His book does cover ALL the emotions of a teenage boy...and people in general. I would recommend it to all. Although teenage girls may be totally grossed out by the reality of the boys they think are so wonderful.

WINGER was magic to my ears. It had all the ingredients: main character with a strong voice, quirky-connectable supporting cast, depth and meaning. But ANDREW SMITH knocked it out of the park with wit and humor.

I enjoyed being in Ryan Dean's head while he worked through his Coming of Age story. Bullying, Man Codes, being apart of a Team and all the boy shenanigans they can come up with. The desire to kiss available lips warring with trying to escape the "friendship" zone with the girl he loves. Care packages with condoms and a "Your First Time" pamphlet from your loving mother.

Ryan Dean is smart, funny with a sensitive side. He unapologetically wears Pokemon underwear. He embraces the "Wild Boy" persona and goes for it, even when fear and uncertainty creep in.

SMITH's words and MARK BOYETT's narration are DY-NO-MITE! MARK captures the young, unsure, geeky Ryan Dean that is a tad unpredictable with throw-up of the month and mind. None of the oddness, wildness, passion or bravado escape his range to express all that WINGER has going on between the covers. He perfectly pegs all the screwballs and neanderthals in the supporting cast of characters. His females are feminine with a little fire. MARK's pacing and emotion create a movie in your mind. He had me there in the moment right along Ryan Dean. I felt like I was in the car with Screaming Ned, shrieking, cussing and losing my shit too.

What made the experience of listening to Winger the most enjoyable?

Winger was just really darn funny! I don't know if it needed quite as much swearing, but hey, the narrator is a 14 year-old boy, and we all know how gross and perverted they can be on the inside, at least Ryan Dean doesn't show it on the outside very often. Yes, this story has some swearing and crude humor, but it felt quite realistic to me and the book had me laughing out loud on more than one or two (or three) occasions. Listening to the book means that you miss out on the cartoons, charts, etc. that pepper the book, but the narrator does read them, and mentions that it is a drawing, so it really doesn't pull you out of the story that much. Honestly, if you don't mind crude humor and reading anything from a 14 year-old boy's perspective, then you will love this book. I thought the secondary characters, especially the male ones, were well done and added a lot to the story - I especially like Joey and Seanie as characters. The girls were somewhat unfathomable, but from a 14 year-old guy's mind, that is true to life also. It did kind of make me picture Ryan Dean as unbearably cute, since the junior girls all seemed to be crazy for him, but he doesn't see himself that way, so who knows? From what he says and the feelings that he expresses, I know that he is a really good guy deep inside.

Of course, Ryan Dean! Even though he constantly calls himself a "loser", by the time you get into the book, you realize he is so, so not, in any way, a loser. He is smart, funny, ready to stand up for his friends, and although he swears on the inside, he says he doesn't out loud, and you believe that, because he really seems like a good guy. Sure he is immature, and thinks about sex constantly, but that's part of his struggle, being a 14 year-old junior in high school.

Which character – as performed by Mark Boyett – was your favorite?

He performed all the characters well, again, Ryan Dean was the best. It seemed like he kept trying on and off to give Joey a New York-ish accent. It wasn't out of the question that he would have one, even though the school was in Oregon, Ryan Dean was from Boston, so Joey might very well have had an accent (although I don't think it ever said in the book that he did).

This book will make you laugh and cry. Don't miss it!

The main character is a 14 yo boy, I’m a 53 yo man, and I thoroughly enjoyed this perfectly drawn character taking me back to all those wonderful, horrifying, thrilling, embarrassing, hurting, and amazing feelings of growing up.

A little colorful language? Nope. So much that I couldn't come close to finishing.

This book and it’s sequel let me be more relaxed during the summer! I love this book

Ultimately and painfully this is an amazing story that is, in fact, LGBT.
The voice of the protagonist is clever, witty and hilarious. It quintessentially captures the voice of any boy at the physically and emotionally disorienting and pivotal age of 14.
I personally identified with the avoidance of verbal profanity while it so repetitiously f-bombs his personal thoughts, or how the endless description of every girl being hot, because 14 year old boys gay or straight are still struggling to elaborate on these new and overwhelmingly powerful feelings of sexual attraction. So hot pretty much describes it all.
Any mother or father who has raised a rather bright boy through their 14th year, or any guy gay or straight will love the story, its infatuations, friendships and both the funny and the messed up sh—-, that happens in high school and jr. high.
I cannot recommend this story enough.

This book just about ripped my heart to shreads. Every second was engaging and memorable. Definitely for older teens but still fantastic.

This is your parents' YA novel.

What disappointed you about Winger?

Where to start? I gave this book 3 hours of my life before I gave up on it. It sounds like it was written by a 50 year old man imitating slang that was popular in the 80's. The book is peppered with such current phrases as " smokin' hot" and "gee, thanks," with a generous helping of the F-word to make it sound "edgy."

The characters come off as contrived and dull. The fact that you can clearly see what the author is aspiring to with his main character Ryan Dean makes this effort even sadder. He was supposed to be witty, slightly eccentric, and charming in an underdog sort of way. He is none of these things. His inner thoughts are completely banal, punctuated by off-kilter metaphors that only ring true about 10% of the time, and his melodramatic descriptions of minor events are grating.

The female characters are ridiculous, and the way the main character interacts with them is even worse. Every female character is described by her physical appearance nearly every. time. they. talk. How many times is the reader going to be interesting in hearing that Annie is smoking hot? And that other girl over there is "crazy hot." And that third one is "smoking hot in a mustachioed kind of way." And oh, yet another is sexy in a "that lady cop who arrested me in Boston" sort of way (what a unique stream-of-consciousness-style description you've got there! What originality!). It goes on and on. We also get an earful when Ryan Dean comes across a woman who offends him by not being attractive. God forbid a woman above the age of 35 passes in front of his impressionable eyes!

The fact that this uninspiring, self-indulgent novel is in the young adult genre is not an excuse. There are plenty of more sophisticated, original, evocative offerings in the genre. I've read and enjoyed YA books before (Speak, The Hunger Games, etc.). I've read and not enjoyed YA books before while understanding that my 14 year old self would have liked them just fine. But this book…I cannot comprehend anyone of any age finding it impressive in any regard. Some might be able to stomach (not enjoy it, stomach it) Winger as a trashy summer read, but I can't think of anything praise-worthy in this mediocre journey through boarding school.

I am 22, and while I am a couple years out of YA's target demographic, I'm not so far out of high school to have forgotten what teenagers like and don't like. In the end, this book is full of things that young people (and hey, humans in general) hate. Posers. Being talked down to. Middle-aged men adding swearing to their bland fiction because they think that is all that gets young people interested. Cut the gimmicks and give me something that has some truth or emotion or insight.

I feel a bit guilty about making the first review of this book on Audible an admittedly nasty one, so I'll give the author of Winger this: he has two 5 star reviews on Amazon. At least we know that he has friends.

Would you ever listen to anything by Andrew Smith again?

Don’t let the review fool you. I adore this piece of literature. However, I am currently a college student studying English and there are a few developmental issues I cannot over look. I will not extrapolate on that right now, but I will tell you the first time I read this piece was in early high school and I was about the same age as the main character. It left an imprint that allowed me to further explore and appreciate things that I have. As well as push my adoration for writing and other relevant workings of the subject. It changed me and I never forgot about this piece, and I don’t know if it will do the same to you, but it isn’t a book you should not read.