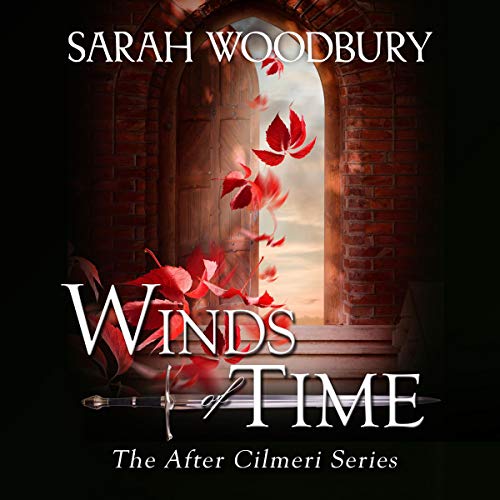 Winds of Time is a novella from the After Cilmeri series:

Meg had thought that taking a commuter flight from Pasco, Washington - to Boise, Idaho - would be a simple matter. But nothing is simple for Meg when it comes to travel, and especially not when she finds herself in the Middle Ages again instead of in a plane crash on a mountain side in Oregon.

And when the pilot takes off without her in a quest to return to the 21st century, Meg will need every last bit of maturity and knowledge she gained in the 16 years she spent in the modern world - to survive even a day in this one.

A note from the author: This story was started many years ago, as part of Footsteps in Time, book one in the After Cilmeri series. When it came down to it, however, the story didn't fit with what was happening with David and Anna, and had to be put aside. Happily, I am now able to share the story of Meg's return to the Middle Ages. Thus, Winds of Time takes place between part one and part two of Footsteps in Time. I think you will enjoy Winds of Time more if you hear Footsteps in Time first. Diolch yn fawr (thank you)! Sarah

Other books in the series include nine novels:

What listeners say about Winds of Time

Fill in for the 2nd book.

Just a quick fill in for book prior of the perspective of a Meg's journey.

I actually fell asleep 3xs trying to listen to this narrator! Waste of my time!!!

THE SHORT STORY IS AN EXCELLENT BRIDGE BETWEEN BOOKS 2 AND 3. FOCUSING PRIMARILY ON THE MOTHER'S RETURN TO WELLS. THE WRITERS UNDERSTANDING AND KNOWLEDGE OF LIFE IN TIMES PAST IS VERY INTRIGUING AND PEAKS MY INTEREST AS FEW WORKS OF FICTION HAVE. I THINK THERE SHOULD BE YOUTH CAMP SET UP IN TIMES PAST SO PEOPLE COULD UNDERSTAND WHERE WE COME FROM. TEMPORAL DISPLACEMENT TALK ABOUT FUN. OKAY STORY IS WELL WRITTEN EASY-TO-FOLLOW. ACCEPTABLE FOR PEOPLE OF ALL AGES. NARRATOR IS GREAT AND EASY TO FOLLOW


quite expensive for repeat of what already read. waist of my money and time

I hope there is more. It is a very fascinating story. The narrator is very steady throughout her performance. To me, she lacks emotion.

Fills an important story gap, but narration is off

I've loved this series in both e-book and audio. This novella fills a story gap. While I have enjoyed Laurel Schroeder's narration of these stories, the pace and tone of this installment is inconsistent with the others, making it harder to listen to. Unlike the faster, more confident way she reads the rest of the books, this one is read in a slow, breathy whisper. Just hard to reconcile.

The series continues and keeps you spell bound with each chapter.Time travel through the ages! Wales # one,England, Ireland to name a few.Love story though the ages,history changes by accident,due to time travel......read and you will find out!

Great way to fill in the series

Absolutely. It fills in the story from Meg's perspective.

What other book might you compare Winds of Time to and why?

That's hard because it's a Novella.

When Meg and her family are reunited. It's the best scene in the entire series. I could listen to it hundreds of times.

I laughed and got choked up - so both.

This is the best series that I have ever read and I love listening to the books.

A sweet snack treat filling gap in After Cilmeri

This smaller episode in the After Cilmeri series is far shorter than the full length stories but it fills in the missing story of Meg's that fits into the timeline of Footsteps in Time.

I can hardly say anything about the story without it being a spoiler, but anyone who reads the descriptions of later books in this series could perhaps detect Meg's presence in those stories so yes - Meg has her own adventure to tell us about.

So many bits here come swooping back in another few more books. But this is Pure Meg / it's nice when the mom gets to tell her story again. Loved this mini vacation via my ears.

I purchased this book, myself, as a whispersynch for voice companion to the kindle edition of this book, and love the ability to alternate between and listen, even though this is s quick read.

Definitely grabbed my interest to read the whole series! Written so it almost seems believable that something like this could happen. I found it easy to identify with the main characters even though they are very different. Fun read- looking forward to the next one.