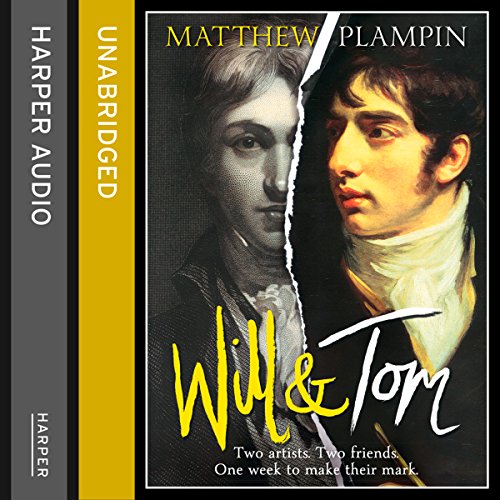 Will & Tom is a glimpse into the life of the infamous artist J. M. W Turner as a young man during a week spent at Harewood House fighting for a commission against his childhood friend and rival, Tom Girtin.

1797, West Yorkshire. When young artist Will Turner arrives at Harewood House at the invitation of aristocrat Beau Lascelles, his intention is to do no more than sketch the house and grounds, receive his commission, and return to London.

But Will is not the only artist here: He is one of two men who will make up a Cockney Project. His fellow artist? Childhood friend and now rival Tom Girtin, dressed up as much as his meager wallet can allow, billing and cooing amongst the esteemed guests. But Will is not so easily distracted. He wants to get the job done and get out.

As neither servant nor hallowed guest, Will finds few allies but is content to be cloistered in his room with no distractions - ensuring the expedience of his work. But the servant halls are alive with whispers of scandal, and when Will ventures to sketch the local ruins he instead witnesses something that will threaten both his commission and his friendship.

Alive with intrigue, artistic rivalry, and society scandal, Will & Tom is a glimpse into the life of the infamous artist J. M. W. Turner and a story of how we are liberated from the shackles of our masters at a time when England is awakening to its crimes of slavery and servitude.

"A fascinating novel that brings to life an extraordinary historical episode...I can't wait to see where Matthew Plampin goes next." (Andrew Taylor, author of The American Boy)
"Fascinating...Matthew Plampin lights up a murky episode of French history." (Liza Picard, author of Victorian London)
"A galloping good story." (The Times)
"Lust, avarice, envy, revenge all play their part in this brilliantly told, well-paced story." (Daily Mail)
"Plampin's historical research is impressive, as is his command of detail...his true gift of descriptive power." (Independent on Sunday)

What listeners say about Will & Tom