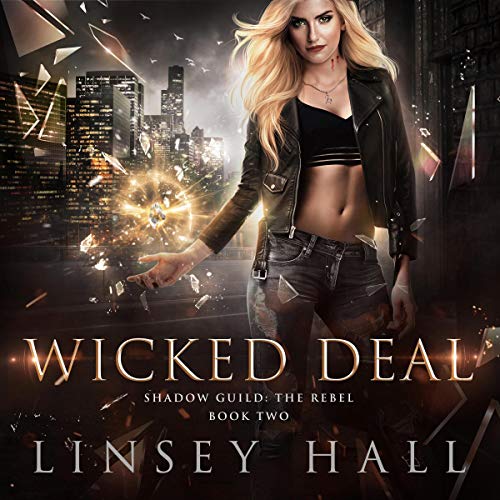 I've made a deal with the Devil.

Finally, I’ve found a place where my weirdness fits in - Guild City, a secret magical place deep in the heart of London. And it’s great...for about 2.5 seconds. Right up until the Council of Guilds discovers I’m a magical misfit with too much magic I can’t control.

When they throw me in prison, my only hope is The Devil of Darkvale. A prophecy states that the lethally sexy vampire is my Cursed Mate. Whatever that means. He’s so powerful that he can get the Council off my back, but he’ll only do it if I work for him.

I want to refuse, but I don’t have a choice. I agree on one condition - he trains me to control my magic so the Council won't toss me in a dark cell to rot. He agrees, but as we work to solve a mystery from his deadly past, it becomes a question of whether or not we’ll even survive.

What listeners say about Wicked Deal

learning to control her magic while trying to save guild city her new home, Carrow has to prove she can lockdown her powers to the council of guilds.

The Shadow Guild is not as good as the first book in this series but it's ok. If I could give it 3 and a half stars I would. I like that her powers are growing and changing, but, there doesn't seem to be any explanation of why.