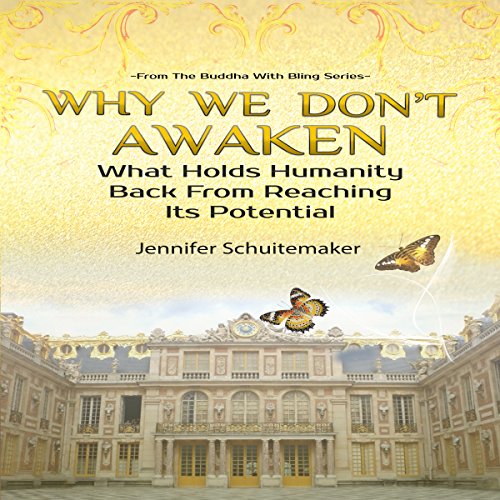 Why We Don't Awaken: What Holds Humanity Back From Reaching Its Potential

The Buddha With Bling Series
By: Jennifer Schuitemaker
Narrated by: Rebecca Roberts
Length: 4 hrs and 17 mins
4.0 out of 5 stars 4.0 (1 rating)

Why We Don't Awaken: What Holds Humanity Back From Reaching Its Potential

In Why We Don't Awaken, Jennifer Schuitemaker treads on sacred ground by digging up the origins of ancient belief systems and ways of controlling our actions and behaviors in the world that are keeping us from experiencing ourselves as who we really are as total spiritual, emotional and physical beings.

Even today, according to most religious and spiritual belief systems, the only way towards enlightenment or a higher purer existence is to renounce the physical world and unplug from the lower, dense, inferior bodies we were born into.

According to Schuitemaker, we are trying to wake up while still rejecting pieces of ourselves. This breaks us up into splintered fragmented pieces. Stuck in a subjective cultural belief system that may be archaic and out of date. Wholeness is integration not fragmentation.

What listeners say about Why We Don't Awaken: What Holds Humanity Back From Reaching Its Potential