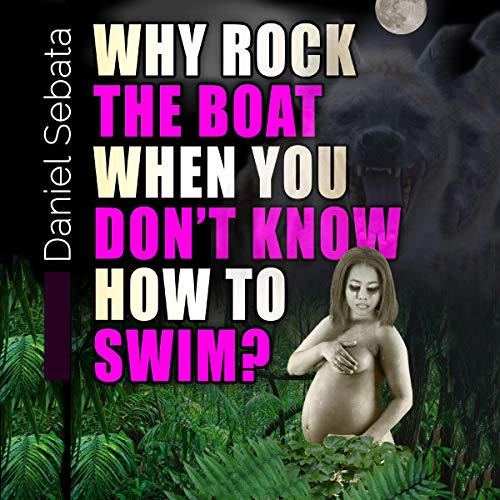 Why Rock the Boat When You Don't Know How to Swim?

Why Rock the Boat When You Don't Know How to Swim?

Dolly believed that she was stalked from Zimbabwe via South Africa to Bournemouth in the United Kingdom, what was she smoking?

I am sitting at the back seat of a police car taking me to Bournemouth police station in England and wondering about the direction my life is taking. Running from the police was not the right thing to do - it doesn't take a genius to figure that out. Thirty weeks pregnant and running a heptathlon, what kind of woman does that? The short woman with puppy eyes is turning me into Olympian Jessica Ennis! Am I pregnant of a human or animal?

Who knows what happened that night at the Limpopo River, as I lay unconscious. Male genitals were written all over the back of the hyena looking after its cubs. So, who knows, it could have made me pregnant! The police lock me in a cell saying I could choose to be seen by female officers only. They also inform me that a psychiatrist will see me soon.

The alarm bells start ringing! I saw a witch doctor to avoid seeing a psychiatrist, but his concoction has delivered me into the hands of a psychiatrist. A few days ago my uncle told me that my mother was discharged from hospital, but she was still in a vegetative state. I wish she were here and tell them that I am not insane. While still feeling sorry for myself, the police return and lead me into a room to meet a psychiatrist.

A white short bald man, five foot five or so, introduces himself as Dr. Whitehead, the psychiatrist. He has a hairless scalp, save for a street tree like thin line of hair on each side of the scalp running through the back of his head. He flattens the thin hair over his naked scalp. There is no hint that once upon a time there was healthy hair at the center of his head. I feel intimidated by his thin hairline. Does he keep it to distract his patients so that they don't pay attention to his questions in order to find a reason to lock them up in hospital? He has two companions - a male GP and a woman social worker; both are white.

Full of twists turns , make you think twice about the efficiency of mental health diagnosis