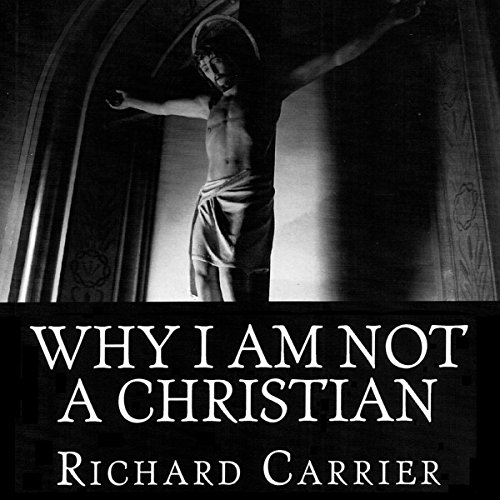 Why I Am Not a Christian: Four Conclusive Reasons to Reject the Faith

Dr. Richard Carrier, world-renowned philosopher and historian, explains the four reasons he does not accept the Christian religion, describing four facts of the world that, had they been different, he would believe. Those four reasons are God's silence, God's inaction, the lack of evidence, and the way the universe looks exactly like a godless universe would, and not at all like a Christian universe would, even down to its very structure. Dr. Carrier addresses all the usual replies to these claims, in ways you might not have heard before, relying on his wide experience in debating and studying these issues all over the world for more than 15 years.

A perfect book to introduce yourself, or your friends, to why fewer educated people are embracing Christianity than ever before.

What listeners say about Why I Am Not a Christian: Four Conclusive Reasons to Reject the Faith

A very factual book that is balanced and debunks the “myth” of Christianity. A good listen

I love religion. I love to dig into the heart of what makes a given faith tick. I love the discourses of philosophy that support or deny given aspects of it. I love seeing the back and forth of the debated issues, seeing which arguments are the strongest. It's fascinating to me. Because of that, I'm rather surprised I haven't come across Dr. Carrier's work until now.

This is a solid case for atheism, written as a discourse to be read by Christians. It's well-reasoned. The logic is impeccable, regardless of which perspective you adhere to. Without saying so, it works under Sherlock Holmes' own principle of "When you eliminate the impossible, whatever remains, however improbable, must be the truth." In other words, he uses scientific method to seek what's provable. I'm sure there are many of the faith that would have instant negative emotional reactions to this. Regrettably, such is the case when the heart overrides the head. This isn't an argument made to address that.

I would love to see an equally reasoned argument made in rebuttal to this that accepts provable evidence and explains it with equally provable evidence. I think that'd be an interesting read.

my reaction to the religious fundamentalists

polls show that more people are self identifying as non-religious which I think is a reaction to the religious right. I had an easier time respecting their beliefs when they respected mine.... but now they want the whole country to live their doctrine, whether we want to or not. When people asked me what religion I am, I used to say "I was raised Lutheran" and let it drop there - now I say "I'm an Evangelical Atheist". Thank goodness that Fox TV's average viewer is 65+ so in the next decade they will all start dying off. Something to look forward to. Anyway, this book gives lots of food for thought for those on the fence and great ammunition for those who want to enter the debate. I liked it. but I think you figured that out.

This isn't an attack, or emotional vitriol. It is based entirely on the rules of logic and presents a calm, clear, and unassailable case for atheism. I was impressed with the author's step-by-step analysis as well as the contemplation, and ultimate rejection, of Christian ideals in a careful, thoughtful manner.

As Carrier states in his introduction, he is willing and able to change his position if evidence were forthcoming. Unlike creationists and certain brands of apologists (like William Lane Craig) who steadfastly refuse to let the evidence lead them to truth but seek to force the evidence to lead them to their pre-established biases towards their particular faith. Take this quote from Craig during his debate with Mark Smith. In response to a hypothetical question,

"Dr. Craig, for the sake of argument let’s pretend that a time machine gets built. You and I hop in it, and travel back to the day before Easter, 33 AD. We park it outside the tomb of Jesus. We wait. Easter morning rolls around, and nothing happens. We continue to wait. After several weeks of waiting, still nothing happens. There is no resurrection- Jesus is quietly rotting away in the tomb."

Craig's unabashedly honest reply (which, ironically, reveals the depth of his deceit, was, and I am paraphrasing:

"Yes, I would still believe. The internal witness of the holy spirit trumps any and all external evidence against Christianity."

"When a person refuses to come to Christ it is never just because of lack of evidence or because of intellectual difficulties: at root, he refuses to come because he willingly ignores and rejects the drawing of God’s Spirit on his heart. No one in the final analysis really fails to become a Christian because of lack of arguments; he fails to become a Christian because he loves darkness rather than light and wants nothing to do with God."

Carrier immediately sets himself out from his opponents by a candid description of his position and a glimpse into his profound intellectual rigour and integrity.

A quick read at under 100 pages, the evidence and reasoning provided are sound. This is no hollow chest-beating piece from a sophist attempting to sell snake-oil as diamonds. This is a clear, level-headed and fair analysis of why religion has yet to prove itself true and must spread through violence and indoctrination. Furthermore, as these flaws within Christianity can be linked and pointed to

The author's first argument is from divine hiddenness and silence. Why does god refrain from telling humanity his plan? Why are there so many Christian and Muslim sects if god has a single message and plan for the world?

Common rebuttals appeal to free will, which is completely inadequate for explaining why religious believers, who have clearly NOT CHOSEN to reject or deny god's message, receive such conflicting and inconsistent messages. Wouldn't the Mormons, Hindus, Muslims all receive the same revelation? Based on the Christian belief held by most adherents (and demonstrated by CS Lewis in Mere Christianity), god's plan is for humans to fix a fallen world. Funnily enough, his actions (or more accurately, the lack thereof) completely belie his goals. Let's not forget that god is (allegedly) NOT the author of confusion, as illustrated in 1 Corinthians 14:33. CS Lewis, among others, have claimed that our conscience is the method by which god speaks to us, which again does not address the different moral conclusions reached by so many believers and non-believers.

Free will doesn't explain why he supposedly appear to prominent characters in the Old Testament. As Carrier states, physicists do not nullify the free will of those who seek out more information about the big bang or any other theory. A loving god would, likewise, ensure that everyone had the correct message before simply giving up on them as lost causes. As such, the basic claims of Christianity have been disproven by reality.

Other arguments include god's inaction. A god (or any supernatural causes) are unnecessary to explain the natural laws of the universe or why bad things happen. For if there was a tri-omni god, there would be no evil or suffering. Creation would begin and end with heavenly bliss. Free will fails to defeat this for obvious reasons (and less obvious ones, such as the difference between free will and free action), most prominent among them the fact that humans routinely deny freedom to those who harm others.

Fine tuning fails because a god would not need to fine tune the universe for life. This argument, while instinctively pleasing and convincing upon first blush, ignores the vast amount of the universe that is NOT conducive to any life, let alone human life. Without civilisation, we wouldn't have been able to propagate as successfully as we have. Why would a god allow his cherished creation to dwindle to a mere 10,000 and teeter on the brink of extinction? Not only is this atrocious design, but demeans the scientists and altruists throughout history who have striven to make life better.

The use of mathematics further solidifies Carrier's position, although it will likely seem too esoteric for those who have not taken courses in probability.

For further essays by Carrier, I encourage you to read the following compilations.

The Christian Delusion: Why Faith Fails

The End of Christianity

There are some good arguments here

I would recommend this book to a friend, the arguments presented in this book not only do a good job of proving God does not exist, but shows the problems with Christianity as well and why one should consider leaving Christianity.

It was 4 arguments not a story. Well done.

Since he wrote it he had a very natural flow to his read. As if he was simply explaining his position to you in person.

There were some funny parts but it is hard to cry over arguments.

I found it hard to hear him suggest atheism would hold to a particular position when I think it would have been more appropriate to suggest 'naturalism' or 'evolution' or modern cosmology hold to this view, not atheism as such.

Where does Why I Am Not a Christian: Four Conclusive Reasons to Reject the Faith rank among all the audiobooks you’ve listened to so far?

Highly recommended! If you are looking for arguments to flumux your favorite apologist friend and send them scurrying to hide in agnosticism, there is a wealth of ammunition here.

Speaks clearly and was easy to understand.

God is silent, inactive, doesn't provide evidence for Christianity and we don't live in a universe that looks like the Christian god made or runs it. Christianity fails. Richard Carrier makes the most reasoned argument I've yet seen for this case. This short book should be read along with Irreligion by John Allen Paulos as well as the titles given in the bibliography if you're interested in well reasoned criticisms of religion. This is not a book for the die hard faithful as one cannot be reasoned out of a position that he or she wasn't reasoned into to begin with.
What I found most compelling is Carrier's clarity and common sense. His examples and analogies are simple, direct and relevant. I wish I had read this book first.

Richard is an incredible wordsmith and insanely knowledgable on the subject of christianity. I highly recommend this book for great discussions and arguments against the religion machine.

Short, concise and precise. Mr Carrier does a wonderful job reading his own title. lots of good ideas. Will be listening it to it again in the future with the purpose of memorizing some key concepts.

not easy to follow at times but good ok hummm