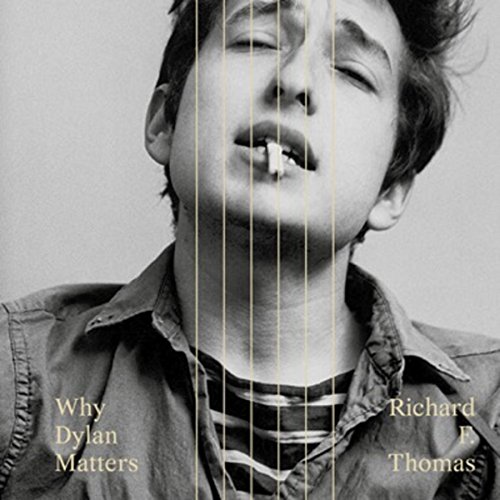 By: Richard F. Thomas
Narrated by: Nick Landrum
Try for £0.00

When the Nobel Prize for Literature was awarded to Bob Dylan in 2016, the literary world was up in arms. How could the world's most prestigious book prize be awarded to a famously cantankerous singer-songwriter in his 70s who wouldn't even deign to make a victory speech?

In Why Dylan Matters, Harvard professor Richard F. Thomas answers that question with magisterial erudition. A world expert on classical poetry, Thomas was initially ridiculed by his colleagues for teaching a course on Bob Dylan alongside his traditional seminars on Homer, Virgil and Ovid. Dylan's Nobel Prize win brought him vindication, and he immediately found himself thrust into the limelight as a leading academic voice in all matters Dylanological.

This witty, personal volume is a distillation of Thomas' famous course and makes a compelling case for moving Dylan out of the Rock & Roll Hall of Fame and into the pantheon of classical poets. The most dazzlingly original and compelling Dylan book in decades, Why Dylan Matters will amaze and astound everyone from the first-time listener to the lifetime fan. You'll never think about Bob Dylan in the same way again.

"At last an expert classicist gets to grips with Bob Dylan. Richard Thomas takes us from Dylan's high school Latin club to his haunting engagement with Ovid and Homer in recent albums. He carefully argues that Dylan's poetry deserves comparison with Virgil's - and Thomas, senior professor of Latin at Harvard and author of some of the most influential modern studies of Virgil, should know!" (Mary Beard)
"In Why Dylan Matters, Professor Thomas reveals how Dylan's work transfigures Western literature and history into a magical world of song and performance that secures Dylan's place in a pantheon of literary heroes from Virgil to Eliot. A critical breakthrough that makes a masterful case for why Dylan is the bard of our times." (Andrew McCarron, author of Light Come Shining: The Transformations of Bob Dylan)
"Richard Thomas has created a monument to Bob Dylan - and, also, a Rosetta Stone. The erudite and politically engaged Thomas is the perfect guide through the wondrous mystery of Dylan's genius." (James Carroll, author of Constantine's Sword)

What listeners say about Why Dylan Matters

An excellent narration of Why Dylan Matters. Although the book is about Bob Dylan and his work much of the discussion around influences could be applied to the work of other songwriters. This is not a line-by-line disection of Dylan’s songs but rather an observation of general influences on his songwriting and the directional changes of his career.