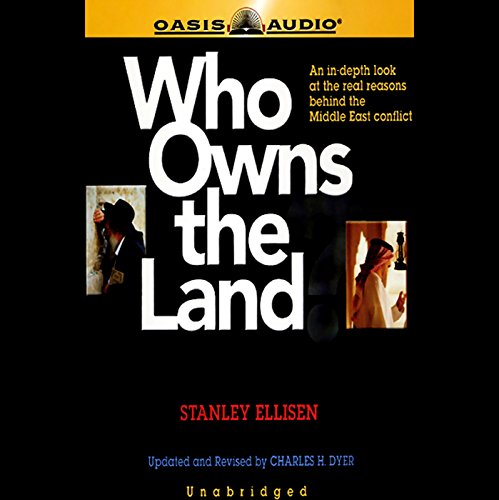 Who Owns the Land?

Jews and Palestinians each claim it, and more blood has been shed over this small Mediterranean area than any other in the world.

"Truth is stranger than fiction," and it is eloquently demonstrated in the history of Israel. The story of the Jews is high drama with a divine component, but much of the plot has been veiled. In retrospect, one can see their powerful influence throughout eastern and western history, swaying world events, building up and bringing down kingdoms and dominions. World War I, for instance, has been called a war without rationale; but factor in the Jews, and a flood of meaning rushes in. The same could be said of the Renaissance, the discovery of America, and most conspicuously, World War II. Fortunately, Jewish historians have preserved a vast literature on their people's tumultuous history, and the bitter details are indispensable if we are to rightly understand the explosive tensions in the Middle East today.

This is an update of Stanley Ellisen's 1991 best-selling book examining Middle East history from a biblical perspective. In addition to offering perspective on recent events, Who Owns the Land? traces the journey of the Jewish people through history and explains the events that have led to their determined stand in Palestine today. Describes the numerous Jewish migrations and expulsions, the emergence of Zionism, World War II and the Holocaust, and a biblical view of the Jews' promised restoration.

What listeners say about Who Owns the Land?

Good review from a Christian perspective

This book can be divided into four parts. There is a very good review of Jewish history much more concise and listenable than Max Dimont's Jews, God and History.

Second is the discussion of the relationship between Christianity and Judaism, also worth listening to.

Thirdly there is a biblical judgment of Judaism and Islam from the Evangelical Christian, New Testament point of view. The repeated references to the "Lord" may put some readers off, but the intro does state that this book is from Christian perspective. Even though I'm not a Christian I found it useful to understand a different point of view.

Fourthly, there is good logical discussion of the Arab and Jewish claims to Palestine.

The narration is excellent and is unique for having included some music, and book is easy to listen to.

I downloaded this book only last night and could not turn it off. I found it riveting in form and interesting in narrative. Although it will take weeks to process all the information given, I had to write to counteract those who criticized its objectivity. I am amazed anyone could think it subjective in nature - the authors take great care in presenting ALL sides with deep respect and empathy.
What they don't do is water down the atrocities done to the Jewish people throughout history from all sides as well as discuss mistakes on all sides of all people groups. So, unless you are a fan of Hitler, the politically corrupt leaders of the P.L.O., or proponents of Jihad, you will greatly appreciate this concise work on the Jewish nation and the history of Israel. It promotes an objective understanding in the plight of the Middle East today as well as grows a deep empathy for the history of the Jewish Nation. It embodies the very true fact of life, "ALL have sinned and fall short of the glory of God." (Apostle Paul, letter to the Romans).
The authors do include a number of citations from the Old and New Testament as well as from the Koran, which I greatly appreciate since it would be impossible to understand anything politically without also having some sort of religious understanding as well. They accomplish this task quite efficiently, without degrading the three religions involved.
The last chapter is written primarily for those of the Christian faith, but I believe is beneficial to all, as they state, "Its only through mutual respect and forgiveness that healthy dialogue can thrive." Excellently stated and representative of the entire work.
If you're looking for a concise work to further your understanding of the Jewish people's history and where Israel stands today, I highly recommend this work! It's everything the publisher's summary promises and more.

This book provides a succinct survey of jewish history leading toward a foundation for understanding the current geopolitical crisis through the eyes of a literal interpretation of religious texts. It goes so far as to conclude with an entire chapter devoted to religious arguments on both sides of the debate, which was unexpected. It would have been helpful if the jewish history was balanced with more text on islamic history. Insufficient information was provided on the role of the Ottoman Empire in the region. Also, an interpretation of both histories without the goggles of religion would have been interesting in light of academic research on the original authors of the Old Testament.

DON'T BE FOOLED BY THE TITLE!

I bought this book because I thought it was about what the title says, but it's not. It's religious-right bible study with a catchy title that perhaps the publisher thinks will help sell the book. It's not what I was looking for. I was duped. I lost my money and can't get it back. Don't make the same mistake!!!

Insightful to the Core!

I found this book to be highly insightful and felt that the authors treated the subject matter with utmost objectivity.

Furthermore, the fact that they approached the region's conflict from so many different angles certainly gave me the feeling that they left no stone unturned.

Yet another shameful biased one sided opinion that depicts all the positives of one side and all the negative of the other.