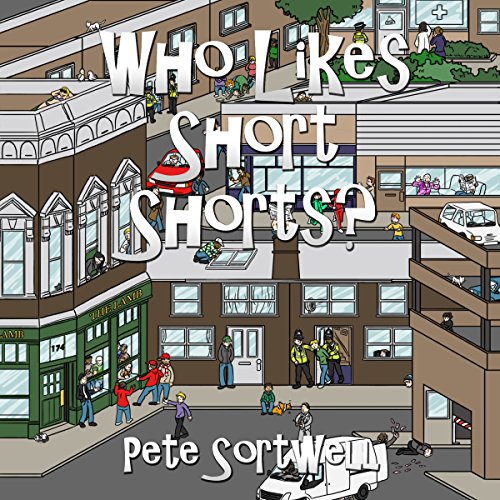 In 2012 Pete Sortwell did something no one had ever done before: He wrote a book based entirely on Amazon product reviews. The book was so successful, he wrote a series. The series was so successful, he spent the next year releasing other projects he'd been working on. Now, for the first time, the stories he wrote while learning his craft are available.

From people stuck on roofs to stalkers following their wives to Weight Watchers meetings, this book is filled with oddballs, thieves, lowlifes, and other such lovelies. This book also contains the side story to Pete's debut novel So Low, So High, so if you're interested in finding out more about Fred, then this is the place.

Contained in this book are also samples of all of Pete's other books. The short stories amount to around 11,000 words.

What listeners say about Who Likes Short Shorts?

Who Likes Short Shorts? These are funny, funny short stories. IF you don't mind hilarious salty language. Pete Sortwell cracks me up with his sense of humor. These are great laugh-out-loud stories that you just can't turn off.

What made the experience of listening to Who Likes Short Shorts? the most enjoyable?

I think negative humor is especially hilarious. Reminiscent of Anthony Jeselnik(sp?). Totally side-splitting, if you can laugh at the bad parts of the human condition!

What was one of the most memorable moments of Who Likes Short Shorts??

The weight-loss watchers meeting had me laughing so hard!!!

The one where he was caught stalking his wife, who had a restraining order!

I DID listen to it in one sitting. At less than two hours, it was the perfect length.

Just that the narrators voice and expressions were perfect!

This is a collection of many short stories. Inside this book is something for everyone. We all will like at least 1 or 2 if not more of these stories and some of us will like them all! This audio book is done in a UK accent and author is UK, so keep in mind, some words and /or manners are more funny over there than over here in the USA and not all words mean the same thing. I happen to love listening to accents!

Some of these are funny, some are touching and some just need to be told. My favorite in this book was the story of a man whose family was killed in an accident by a drunk driver who was a lawyer and got off, along with what this man did for his own justice. It was touching and emotional and in a few minutes, tore my heart out! I loved it. To listen as this man told his story is unforgettable.

The author, Pete Sortwell did another fine job writing this book. His narrator, Ian Barker did a splendid job with all his multiple voices and there was a lot of them too! I loved the emotion added into the voices! Good job guys!

Short Stories Based On Darker Side Human Nature

This is a collection of Pete Sortwell's works. I have enjoyed almost all of what I have listen to from this author – the exceptions being a cultural difference, they were good, I just didn't get it!

This was a lot different than the lighthearted humor of Dating in the Dark or the Father Diaries. These are 10-15 minute stories. It is cheeky humor about more serious issues? I'm not really sure how to explain. Perhaps, if you have a loved one with mental issues or weight problems & you have no sense of humor you probably want to avoid this. Or maybe it would help you through.

The narration was perfect for the material. Great performance.

I received this book as a gift in exchange for my review.

Please select 'YES' below if you found my muddled review helpful! Thanks.

I listened to this audiobook in one sitting. It is entertaining and funny enough to keep on listening till the end of this book.

Couldn't listen. Too much swearing and derogatory language, just talking nastily to and about others. There's no humor in that - just poor character

I was gifted a copy for an honest review.I was honestly unimpressed with this book.The narrator ,Ian Barker,was good.The stories were not,in my opinion.

What disappointed you about Who Likes Short Shorts??

The stories just are not funny. Some of them were downright atrocious.

Have you listened to any of Ian Barker’s other performances before? How does this one compare?

This is the worst of his work that I have read.

I received a copy of this in exchange for an honest review.

Okay collection of short stories, some of them good but most of kinda hum.. for my taste, but I listen them anyway I like Ian's voice.