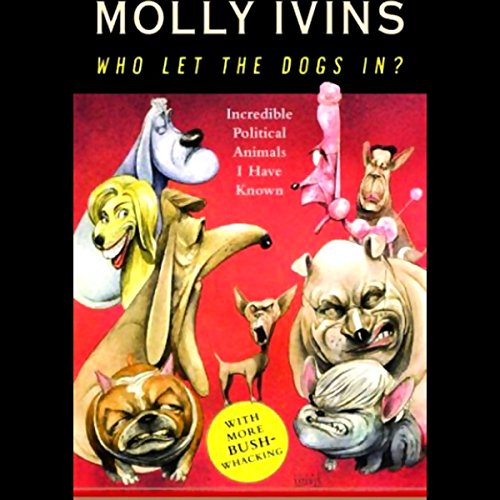 Who Let the Dogs In?

The dazzling, inimitable Molly Ivins is back, with her own personal Hall of Fame of America’s most amazing and outlandish politicians - the wicked, the wise, the witty, and the witless - drawn from more than 20 years of reporting on the folks who attempt to run our government (in some cases, into the ground).

Who Let the Dogs In? takes us on a wild ride through two decades of political life, from Ronald Reagan, through Big George and Bill Clinton, to our current top dog, known to Ivins listeners simply as Dubya. But those are just a few of the political animals who are honored and skewered for our amusement. Ivins also writes hilariously, perceptively, and at times witheringly of John Ashcroft, Dick Cheney, Donald Rumsfeld, H. Ross Perot, Tom DeLay, Ann Richards, Al Gore, Jimmy Carter, and the current governor of Texas, who is known as Rick “Goodhair” Perry.

Following close on the heels of her phenomenally successful Bushwhacked and containing an up-to-the-minute Introduction for the campaign season, Who Let the Dogs In? is political writing at its best.

“Dubose and the razor-tongued Ivins have done their homework, offering a well-researched, comprehensive examination of the dark side of the Bush administration’s agenda, served up with enough saucy language and humor to make it an entertaining read.” (Rocky Mountain News)

“Striking...Just as the Gilded Age brought forth a golden age of muckraking, our modern descent into money politics has brought forth a new wave of outraged reporters. Ivins and Dubose are worthy heirs of an honorable tradition.” (The New York Review of Books)

“Bushwhacked is primarily an indictment of a radical Republican regime. But it is also a celebration of average citizens and ‘nameless, shirt-sleeve, not-very-well-paid functionaries’ who have taken it upon themselves to blow whistles..., file lawsuits..., and otherwise fight back.” (Mother Jones)

What listeners say about Who Let the Dogs In?

I was reminded many, many times while reading this book of why I am voting like I will vote this fall. This book covers many of the political highlights and hijinks of the last couple of decades. Ivins is an admitted liberal who can look past the politics of an individual to their merits as a leader. Skewering Democrats and Republicans alike when they deserve it, her sharp commentary is right on target so many times. This is laugh out loud reading.

This book will help you know many things about the current leadership.they are not democrates nor are they republicans, really.books like this help unmask the truth. we need it now more than ever.They are raiding the country but we must read to discern this horrible truth..

This book is a great look back at Molly Ivins' experiences (so far) in American politics. Libs can rejoice at her early recommendations for those disenchanted by Reagan's reelection and compare it to the current mood regarding Bush's reelection. A great overview of all her work, "Who Let the Dogs" gives a great overview of Ivins' work, including biting satire and criticism of those in office (from Reagan to Clinton) and touching obits. Really powerful tribute to a living legend of Washington journalism!

Molly Ivins is a thrill to listen to, she's a great reader and a better writer. It was entertaining and truthful. I've almost finished it, but have to complain about the selection of articles: I can't remember the last time I've waded through so many obituaries! Yes, she uses them to both celebrate the passing of people she is proud to have known and as a jumping-off point to bring up an issue, but it gets pretty repetitive listening to ANOTHER obituary and ANOTHER one and ANOTHER one and >JESUSMAKEITSTOP!< ANOTHER obituary! I'm worn out from all the dead people!

Still a great listen, I'll go looking for Bushwhacked, next.

Molly at her best!

Molly had her way with words as she dissected the shenanigans of politicians and those of the Texas variety in particular. She didn't mince words, and she was a truth and story teller of the finest degree. I miss Molly and her insight. Molly would have had a ball with the 2008 campaign and election. In this book, she laid out the issues of the election of 2000. We are facing the same political snafus and stupidity today. I imagine that she and her good friend, former Texas Governor Anne Richards are probably looking down on all of us and having a rip roaring time laughing their heads off as only they could do.

This was my first Molly Ivins book. I loved her candor and expressions. Who could come up with "If you put his brains in a bee it would still fly backwards?" This book if full of them. Molly is smack dab in the tradition Mark Twain. The narrator (Anna Fields) is fantastic - she could BE Molly Ivins.