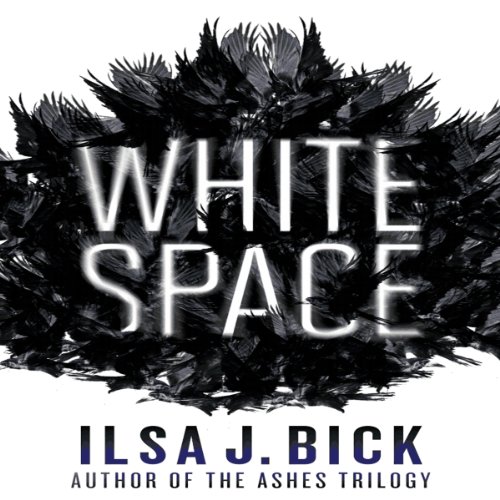 In the tradition of Memento and Inception comes a thrilling and scary young adult audiobook about blurred reality where characters in a story find that a deadly and horrifying world exists in the space between the written lines.

Seventeen-year-old Emma Lindsay has problems: a head full of metal, no parents, a crazy artist for a guardian whom a stroke has turned into a vegetable, and all those times when she blinks away, dropping into other lives so ghostly and surreal it's as if the story of her life bleeds into theirs. But one thing Emma has never doubted is that she's real. Then she writes "White Space," a story about these kids stranded in a spooky house during a blizzard. Unfortunately, "White Space" turns out to be a dead ringer for part of an unfinished novel by a long-dead writer. The manuscript, which she's never seen, is a loopy Matrix meets Inkheart story in which characters fall out of different books and jump off the page. Thing is, when Emma blinks, she might be doing the same and, before long, she's dropped into the very story she thought she'd written. Trapped in a weird, snow-choked valley, Emma meets other kids with dark secrets and strange abilities: Eric, Casey, Bode, Rima, and a very special little girl, Lizzie. What they discover is that they - and Emma - may be nothing more than characters written into being from an alternative universe for a very specific purpose. Now what they must uncover is why they've been brought to this place - a world between the lines where parallel realities are created and destroyed and nightmares are written - before someone pens their end.

loved this style of narration and the VA does a great job. the Story itself is a bit difficult to follow given the authors writing style, but this also makes a second listen is more enjoyable than the first to some degree 8/10 would recommend

must listen to book

intriguing, confusing, scary, wanted to always come back for more. you will want to listen to this book. I would have had a hard time reading the actual book copy.

I have no idea. It is extremely difficult to follow and has way too many plot lines.

Has White Space turned you off from other books in this genre?

No, not at all! It has, however, turned me off of this author.

Thursday Next on Crack!

If you like Acid Trips then this book is for you.

Stop all the jumping around and finish one story line before you jump to the next.

All the voices sound the same to me.

If you could play editor, what scene or scenes would you have cut from White Space?

It was way too confusing to cut anything out.

Great Idea, but didn't do it for me

First let me say that I really really wanted to like this audiobook but Bick failed to capture my attention, I do not have a good reason why, just wasn't for me. Getting to the basics of the story, I think the premise and the idea was a great starting point, I just needed so much more. Essentially White Space is about a girl named Emma who "blinks" or her consciousness instantaneously travels to the consciousness of someone else. One of the other someone elses is Lizze the daughter of a man that as become addicted to the use of dark passages, gateways to alternate dimensions, and bringing things back with him. He then places these things in whites spaces. This is not a good thing at all. Confused yet? I sure was. Then we have a plethora of different characters, for each main protagonist to keep track of. The point of view kept switching and I found it difficult to remember where or who I was and what was supposed to be happening. I really think that White Space has a great and imaginative idea behind it, there was just too much happening and switching up characters for me to be able to keep track without writing it all down. At the end I felt exhausted and possibly more confused than before I started. However, this will be right up someones alley and bring them much entertainment and enjoyment, just not me. I would have needed everything to been dumbed down a bit and maybe split into two books, just speculating.

Audiobook provided for review by Audible.