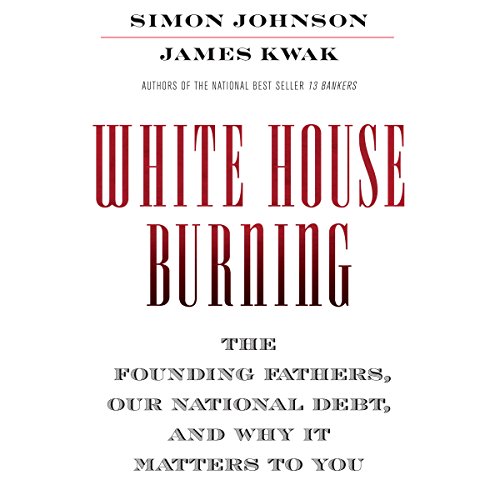 The Founding Fathers, Our National Debt, and Why It Matters to You
By: James Kwak, Simon Johnson
Narrated by: Nicholas Hormann
Length: 10 hrs and 1 min
Categories: Non-fiction, Economics
2 out of 5 stars 2.0 (1 rating)

America is mired in debt—more than $30,000 for every man, woman, and child. Bitter fighting over deficits, taxes, and spending bedevils Washington, D.C., even as partisan gridlock has brought the government to the brink of default. Yet the more politicians on both sides of the aisle rant and the citizenry fumes, the more things seem to remain the same.

In White House Burning, Simon Johnson and James Kwak—authors of the national best seller 13 Bankers and cofounders of The Baseline Scenario, a widely cited blog on economics and public policy—demystify the national debt, explaining whence it came and, even more important, what it means to you and to future generations. They tell the story of the Founding Fathers’ divisive struggles over taxes and spending. They chart the rise of the almighty dollar, which makes it easy for the United States to borrow money. They account for the debasement of our political system in the 1980s and 1990s, which produced today’s dysfunctional and impotent Congress. And they show how, if we persist on our current course, the national debt will harm ordinary Americans by reducing the number of jobs, lowering living standards, increasing inequality, and forcing a sudden and drastic reduction in the government services we now take for granted.

But Johnson and Kwak also provide a clear and compelling vision for how our debt crisis can be solved while strengthening our economy and preserving the essential functions of government. They debunk the myth that such crucial programs as Social Security and Medicare must be slashed to the bone. White House Burning looks squarely at the burgeoning national debt and proposes to defuse its threat to our well-being without forcing struggling middle-class families and the elderly into poverty.

Carefully researched and informed by the same compelling storytelling and lucid analysis as 13 Bankers, White House Burning is an invaluable guide to the central political and economic issue of our time. It is certain to provoke vigorous debate.

“A must-read for anyone who wishes to understand the true nature of our fiscal problems. A fascinating and lively history of how we got into this budgetary mess and a brilliant analysis, dispassionate and balanced, of what we need to do to get out of it.” (Liaquat Ahamed, Pulitzer Prize-winning author of Lords of Finance)
"In this powerful book, Johnson and Kwak cut through both the partisanship and the complexities of the debate over America’s national debt to give us a clear understanding of why it matters and what to do about it. America’s future depends vitally upon bringing our deficits under control while also investing in our growth, and this book tells us how to do both." (Charles Ferguson, director of the Academy Award-winning documentary Inside Job)
"By skillfully placing the debt debate in an insightful historical context and providing detailed recommendations, Johnson and Kwak make a major and timely contribution to a national debate that will only get more heated in the years ahead. It’s a must-read for those wondering about the relationship between the national debt and America’s challenges; the choices that we must make to restore fiscal viability, promote growth, create jobs, and reduce inequality; and the way that polarized politics torpedoes coherent discussion of these complex issues." (Mohamed A. El-Erian, CEO of PIMCO and prize-winning author of When Markets Collide)

A great book on our national debt and our future

Would you listen to White House Burning again? Why?

Yes, I have already listened to this book twice. The book is not only very interesting from a historical reference, but debunks so much of the disinformation and hyperbole in the political rhetoric today.

Our nation faces some serious problems, and as a nation we need to have an intelligent discussion on how we are going to address these problems.
Johnson and Kwak have done an excellent job of explaining deficits, our debt, and how to look at our fiscal responsibilities in relation to our GDP, creditworthiness, and the dollar as the world's reserve currency.

Of particular interest, was how attitudes to government debt evolved from our very beginning as a fragile new nation, through crisis of war and depression, and into today, where US treasuries are the world's choice as a safe haven investment.

The book takes a very sobering look at Social Security, Medicare and what our future costs will be if we don't make some important decisions soon. It looks at the current debt that was created by the two wars, the Bush tax cuts, and the financial crisis, all in what I felt was an objective and nonpartisan analysis.

We as a nation need to make some decisions on how we are going to solve these problems. This book gave me a historical view of past financial crisis and how we got through them, which gave me some hope that despite the political grid lock in Washington we might be able to do it again.

There is a solution. There is hope. We can, and must fix this for our children, and future generations. It's not as dire as some would have us believe, but we do have to start now. This book is a great starting point for getting the facts straight, so that we can have a reasonable, and rational discussion of what path we are going to layout for our country's future.

I enjoyed 13 Bankers, the first book by these authors, much more. However, I do think the topics in this book are important to understand and feel the authors provide reasonable proposals for reforming U.S. economic and fiscal policy.

I expected this to be an economists take on what led to the financial collapse and at first it starts off that way; but soon after introducing two key reasons for our sets and economic issues he abandons all analysis (and economics) and rails against different people/movements that appears to dislike. No facts, just pure axe grinding. For example he offers well thought out rationale on why specific tax cuts were terrible for the economy, then talks about a comparable spending increase by only saying it was great for the country and then talking about why he dislikes the political opponents of the spending increase (in great detail, with only opinions). What could have been a great concept quickly turns into a political diatribe

Would you try another book from James Kwak and Simon Johnson and/or Nicholas Hormann?

There are some good nuggets of knowledge in this book regarding the history of taxes, debt and the value basis of our currency as a country (US). It was very helpful to understand that debt has been an issue for the US as far back as our revolutionary war. However, the author is very clearly highly partisan. He must be a Democrat or Socialist. He makes blanket statements affirming how the American public feels about taxes and government services that certainly do not represent my personal views. This writing style made this book somewhat offensive and I had to grit my teeth to listen to most of the book. The author is almost advocating socialism from a perspective of a collective benefit than referencing any of the founding principles that built this country. I will listen to counter perspectives to better understand a more moderate version of debt, the economy and some of these important financial considerations that we should all understand.

Has White House Burning turned you off from other books in this genre?

No... but probably not this author.

Would you listen to another book narrated by Nicholas Hormann?

Yes... but somewhat flat voice... probably good for book on economics... would not work well for a story book.

Good history of taxes, debt and some controls that were put in place very early in our country's history.

Need a book with less bias.