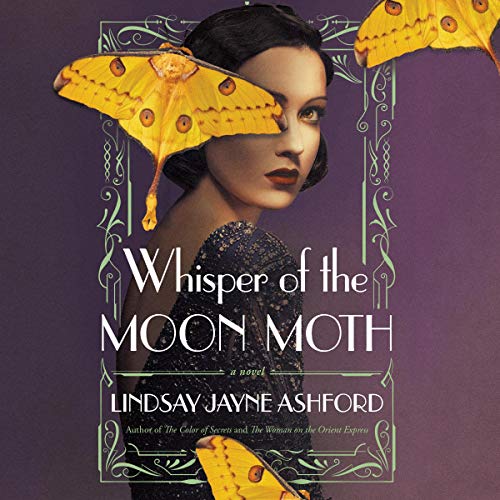 Whisper of the Moon Moth

By: Lindsay Jayne Ashford
Narrated by: Elizabeth Knowelden
Try for £0.00

From the author of The Color of Secrets and The Woman on the Orient Express comes a poignant novel inspired by the Hollywood legend - and the secrets of - actress Merle Oberon, famous for playing Cathy to Laurence Olivier's Heathcliff in the film Wuthering Heights.

For nineteen-year-old Estelle Thompson, going to the cinema is more than a way to pass the time...it's a way out. In 1931 in Calcutta, Anglo-Indian girls like Estelle are considered half-breeds, shunned by both English and Indian society. Her only escape is through the silver screen, where she can forget the world around her.

When Estelle catches the eye of a dashing American heir with connections to a major motion-picture studio, he also captures her heart. Soon, Estelle has a one-way ticket to London and a recommendation for a screen test.

To get to the top, she must keep her Indian heritage concealed - and so begins her new identity as movie goddess Merle Oberon. But just as her dreams are poised to come true, she discovers that her own family is keeping a much more shocking secret from her - one that changes everything she's believed about her past.

What listeners say about Whisper of the Moon Moth

Fusion of Fact and Fiction

Upon first reading this book I thought it was a complete work of fiction until I checked it out and realised that it was a mixture of fact and fiction. I found it fascinating and how things have moved on. The lengths that Merle (Estelle) went through to hide her Indian background to get into the movie business, even denying her Mum who had to pose as her housekeeper. There are a few shocks and discoveries for Merle and the way the story is weaved it all sounded believable.

The book was interesting in that it provided context to a fairly unknown, but not forgotten actress.
However, I found it sad to realize that these actresses - whom I had previously chose to view through the rose colored glasses of the roles they played - were as morally bankrupt as much of Hollywood is today. What happens to people when they become “famous”?
It was difficult to listen to when I wanted to make Merle a heroine, but found it impossible due to her morally challenged behavior.
Truth does not make a poor read...I was simply saddened.

disappointed some parts true some made up....not a biography of Merle Oberon what?
a fairytale..what to believe.

Once again Lindsay Ashford tells a riveting story. This time Merle Oberon. Told with heartfelt emotions about rising to the top amidst conflict.

As I listened, it became apparent that the author was not going to give a true accounting of Merle life, which is what I was hoping to find.

This was a barely fictionlized story of Meryl Oberion. I was very interested to find out what was true.

This cannot hold a candle to the author’s book about Agatha Christie. So if you haven’t read that one yet, don’t let it put you off of that one!

I usually read mysteries, but really enjoyed this book. Now I want to learn more about the actress.

Whisper of the moon moth

My 2nd book by Lindsay Jayne Ashford in seven days . Stunning , captivating and a page turner . Now I’m off to look for her next one .