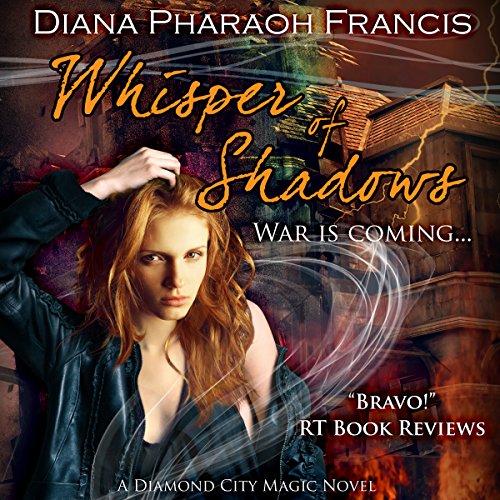 By: Diana Pharaoh Francis
Narrated by: Marlee Johnson
Try for £0.00

When the FBI uses an anti-magic law to arrest and torture Riley's boyfriend, they have no idea what hell they are about to unleash. If Riley can't rescue Clay before he breaks, the result will be a disaster of epic proportions.

With time running out, Riley and her family must rely on two people more likely to stab them in the back than actually help. And, even if Riley manages the rescue, she's still got to deal with two kidnappings and the return of her dad from the dead-the same dad who'd been willing to see her dead to protect his secrets.

What's a girl to do? Kick ass, take names, and protect those she cares about at all costs.

What listeners say about Whisper of Shadows

This third installment to the series was a riving tale, but unlike the narrator of the 1st two books; this one was AWEFUL. She read every sentence as if it was a question. Her cadence was off & sometimes she seemed unsure of what to say next, which is crazy because she was reading a script!! Her narration was so horrible it was distracting. If I didn't like this series so much I would have discontinued with this book because the narrator was just that bad.

The worst narrator ever. I was really looking forward to this installment of the series, and I am working my way through it, but whoever the person was who was responsible for using this narrator should be fired. I will never buy another book this narrator "performs".

Good Story, but the Narrator Breaks It

I have a habit of listening to a series straight, like binge watching a series on Netflix. Switching up the narrator in the middle of a series is very jarring. You are accustomed to your characters with a specific voice and nuance to their speech. When switch up the narrators you loose the reader and pull them out of the story. Especially when the performance is very different. Elizabeth Phillips added a sass and cockiness to Riley that you expect with a talent of her magnitude. Marlee Johnson has a very dramatic and dry performance that doesn't fit this personality at all. This is a very hard listen after Elizabeth. I feel I might enjoy the story more if I read it because I would have Elizabeth's voice in my head for the characters. This is not a favorite.

Not worth the credit

The narrator could have been better but the writing was horrible. The story dragged on just because of the description of feelings or expression. I found myself skipping forward. It wasn’t worth the credit I wasted for this book.